i woke up the morning we were to head across the border way before my alarm went off. I think we all did, actually. there was definitely a nervous energy to the first few hours of our day. we packed up and waited for hank to meet us in laredo, trying to disperse our pesos and dollars in as many places as possible.  the trick would quickly become finding all of our hiding places as we bumbled through our first day of transactions in mexico. but, all we knew that morning was that we didn’t want too much in one place.

hank arrived around 8am, later than he had first hoped, but it was pouring down rain at his house. one major factor in motorcycle trip scheduling: the weather will trump your plans. always. but, we still got a pretty quick start and headed to the Laredo border.  we were across the Rio Grande and heading through Nuevo Laredo in less than 20 minutes. hank got stopped as we entered, which is apparently routine because every third car usually has to pull to the side to be searched. he told us later that he actually waited for the light to turn red on him so that we could pass through without getting stopped. one more thing to add to our list of debts to hank.  so, we headed straight to the vehicle importation building and waited for him there.  he helped us maneuver through the different windows we needed.  and, in about a half hour we were through with all our necessary documents. my job at aduana is considerably easier than bob’s, as our vehicle is in his name. so, he has to do all the paperwork for the bike and I just have to import myself. that may change drastically in the next few border crossings, though, because my job will then become bike-watch duty for both bikes. so, I’ll keep you posted on how the next one goes. 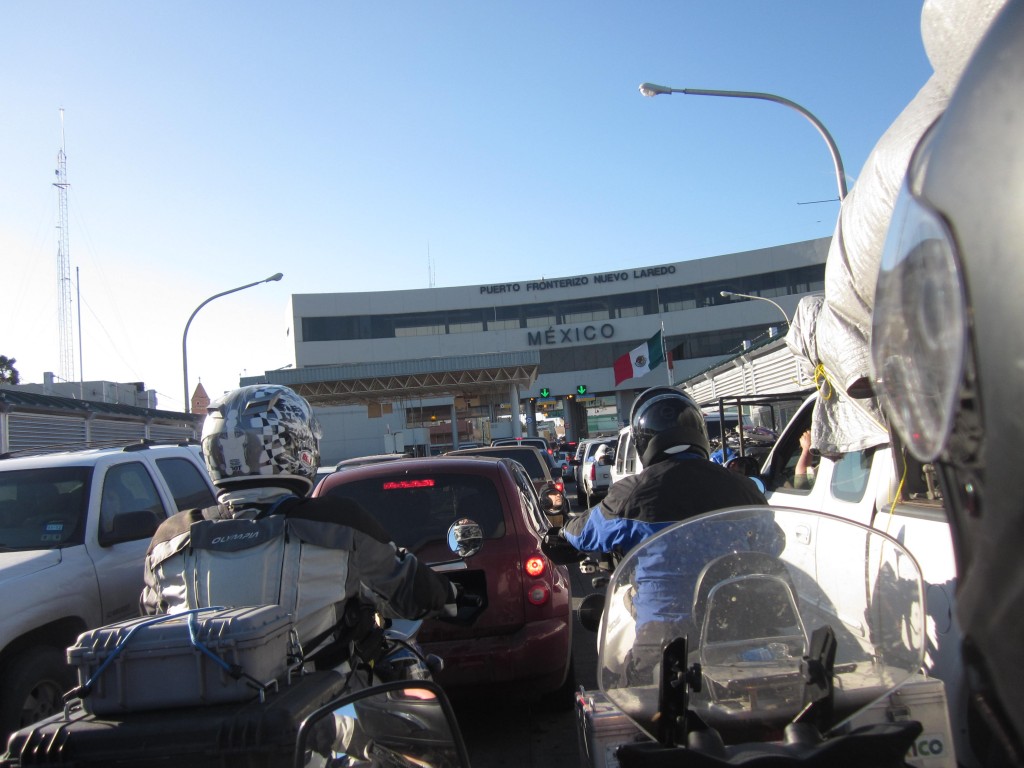 heading into mexico! the bridge was crowded, but we got across it pretty quickly. it pays to be on two wheels.

here we are, officially imported into mexico and ready for the day ahead.

so, we made it into mexico. whew. it didn’t even feel like much work. we headed through Nuevo Laredo, a town that many people had told us not to cross through. the first thing I saw as we rode was a little kids’ soccer game. the field was all dirt, but it made me smile because I immediately thought of the nieces and nephews at home whose games we’ve been to, and had my first (of many) moments of realization that day that life is happening as usual for the people of mexico. and it isn’t much different from the one we left in Kentucky.

we passed through the last border check point with no problems and went through a military check about an hour later. both waved us straight through. we learned (quickly) how to ride in mexico. mom, you don’t want to know the details because I think it would scare you. but, drivers don’t follow the traditional rules. they are always watching out for motorcyclists, even the semis. and, you are expected to make your way to the front of the line of cars because they all part ways for you to head in between them. bob and pete caught on fast to this new method, and ended up loving it by the end of the day. It was great to have hank in the lead, showing us just how this kind of riding is done. and we made great time to monterrey where we stopped for a quick lunch and got back on the road. By around 5pm we were all pretty beat from nerves, adrenaline and trying to keep up with hank all day.  oh, and I forgot to add that the wind was pretty swift all day. that just added to our fatigue. but, when we pulled off the road at 5 to discuss where we wanted to stop, hank told us that the small mining town in the mountains, Real de Catorce, was less than an hour away.  and, he wanted to get us there himself instead of heading on down the road. I think he partly just wanted to visit it again, now that I know what it’s like. but, we were all pretty excited to have him along for our first attempt at climbing into the mountains, especially because the route was 13 miles up an ancient cobblestone road, then through a tunnel into town.

so, we headed up the mountain after I jumped on his bike. he wanted to make sure bob could concentrate on driving up the road and his bike had quite a bit more power. so, we both agreed easily to this plan. I got a few quick shots of the boys and the road while i was on the back of hank’s bike. it was so beautiful and definitely exhilarating to ride up into the mountains this way. 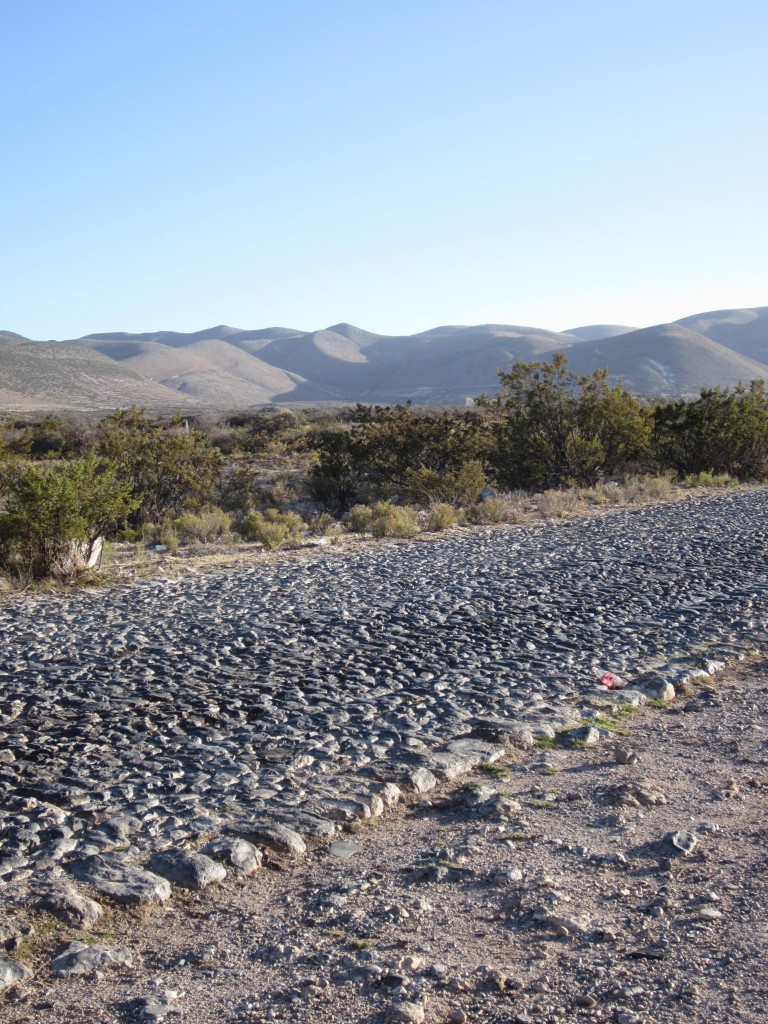 here’s what the road into Real de Catorce looked like. it looks a lot scarier than it actually was to ride, though. 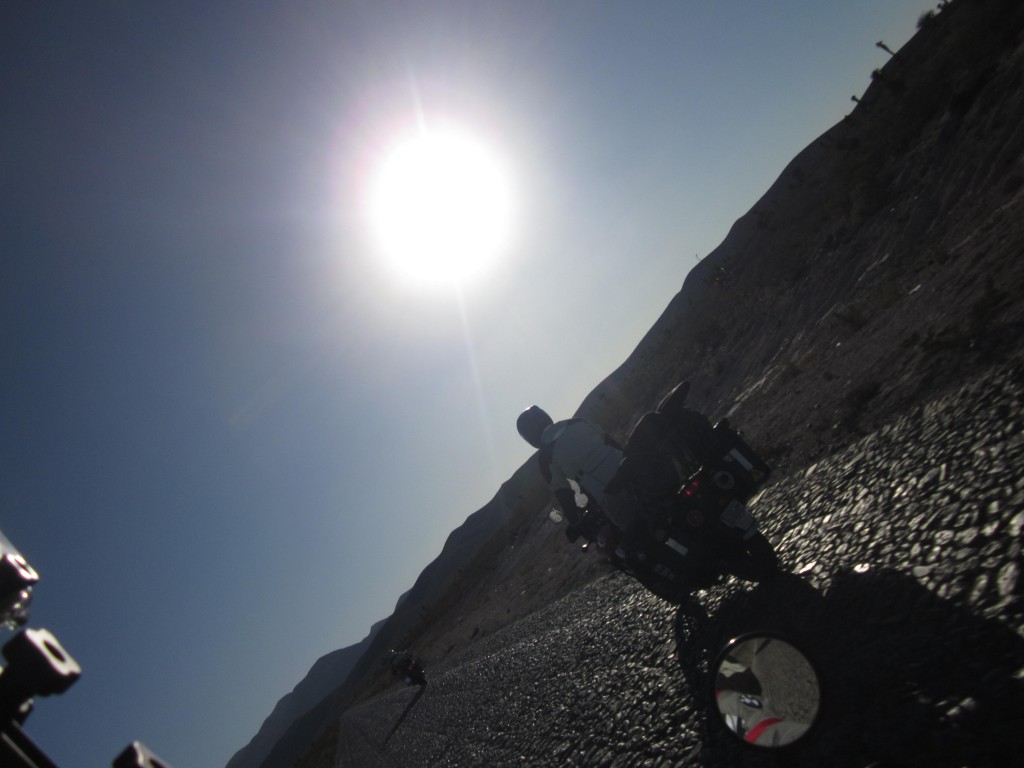 bob maneuvering his way along. it was apparently easier to stand up, so that’s part of the reason i rode with hank.

we made it up the cobblestone road. this arch is just before you head through a tunnel into town. 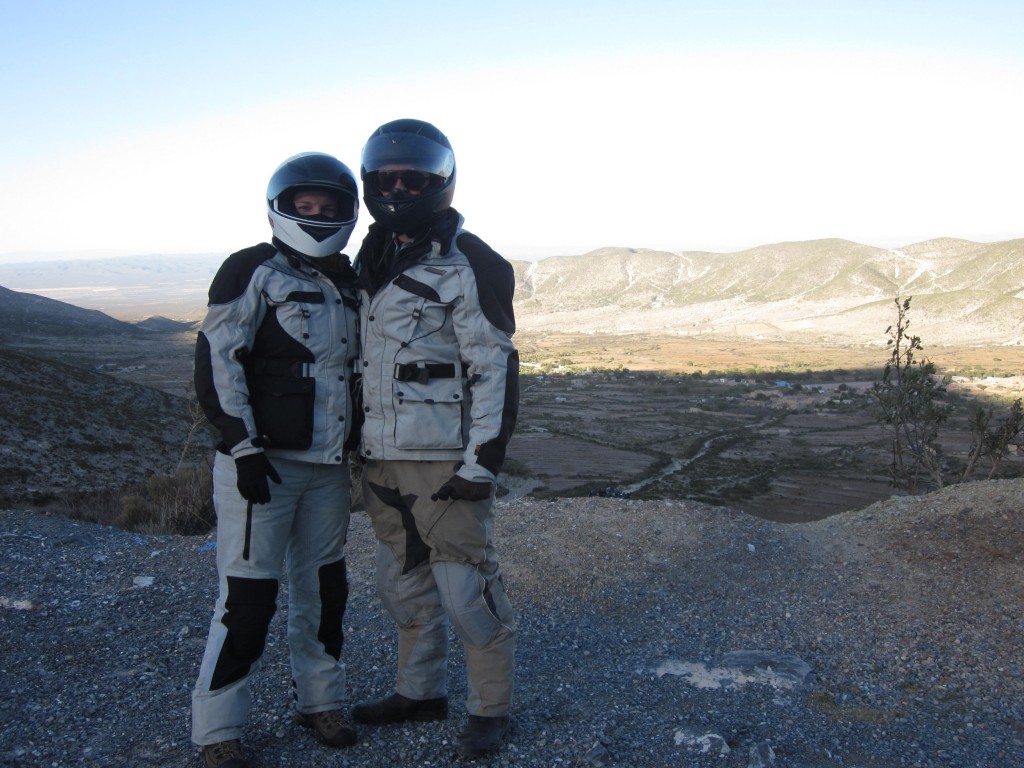 our view of the valley as we climbed into the mountains. the entire drive up was breathtaking!

once we got to town, hank and I drove on in to find a hotel because the streets are narrow, one way, and crazy steep. we left the boys at the exit to the tunnel looking at trinkets and getting asked every few minutes to buy fresh bread from the nice old ladies who walk around all day. hank and I quickly found a hotel (super swanky for such a tiny old town) and we all cleaned up and had a wonderful dinner at one of his favorite restaurants for under $15 apiece, including a bottle of wine! we decided that we are getting spoiled quickly on our first night in mexico. but, we were all so stoked about how great the riding went and how beautiful our surroundings were, that we decided not to worry about that and just soak it in while we are here.

Response to mexico: day one