well, we made it to guanajuato, a city tucked into the hills north of mexico d.f. it’s still pretty high up (ab0ut 7,000 feet). but, we have slowly been coming down in height since that first crazy climb into real de catorce. guanajuato is a beautiful city with lots of trendy university students, museums, and theaters. it has an insane amount of history for mexico. one interesting tidbit is that it’s the birthplace of diego rivera! we are going to his house later today and i’m excited to see it.

yesterday bob and i meandered through the streets without much of a purpose, and we felt like we got a great slice of life in guanajuato. we stopped into a crowded sewing shop to find a thimble for our friend oscar’s mom. the ladies lining the counter laughed at our attempts to ask for and pay for our tiny trinket. we went to the market and bought fresh fruits and veggies to cook at the hostel. and, we happened upon a low budget music video shoot in the university area. it was pretty hilarious. the band was dressed in all black and they had a posse of young beautiful people dressed up in storybook character costumes dancing around them.

my favorite part of the day was watching the kids stream through the streets when school let out. they all have uniforms that look like track suits and there are men with boxes and buckets of candy ready on every corner to entice the kids with cheap sweets. it was fun to watch the interactions. so many of the kids just found their way to where they were going. there weren’t many buses (just for the tiny ones) and there definitely weren’t carpool lines. it was cool to see such independent kids. 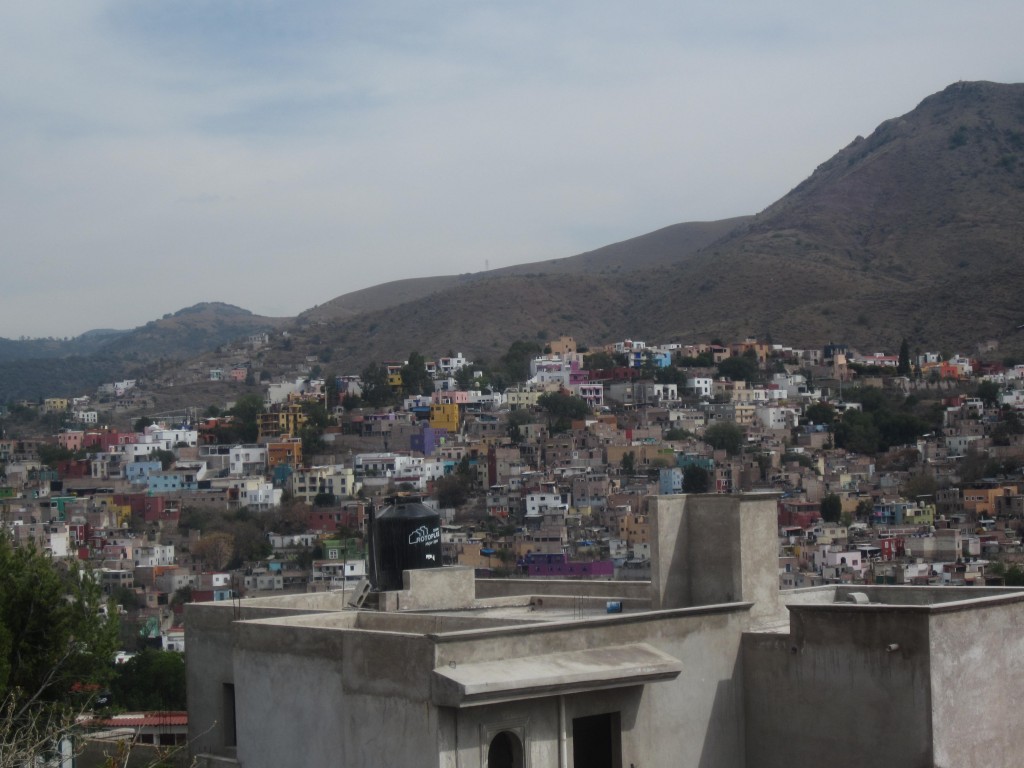 guanajuato, another beautiful colonial town nestled into the mountains. this one has a huge network of tunnels cutting through all the hills and spitting you out in a new neighborhood each time… fun riding!

more amazing churches. this was a basilica near the center of town. it had fancy crystal chandeliers running down the center inside. 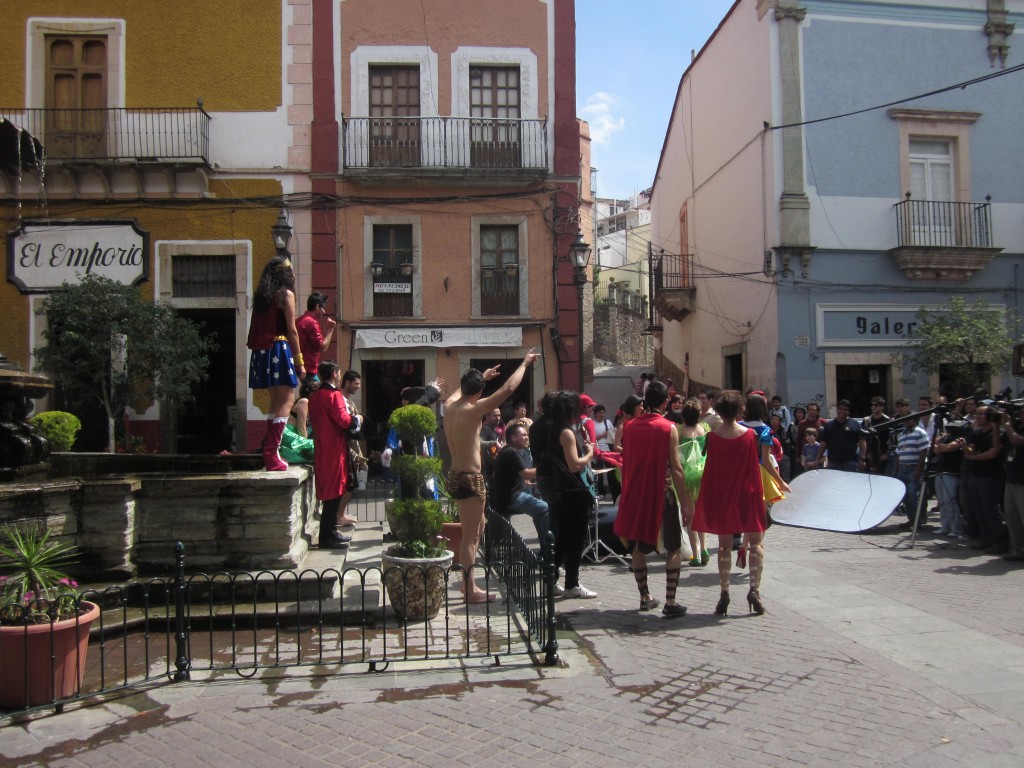 the music video shoot we happened across. the tarzan guy was the funniest (and probably the most embarrassed).

the hostel we’re staying at is pretty amazing. it was a bear to get to, but once here we found the family that runs it to be wonderful, gracious hosts. la senora de la casa cooks an amazing breakfast for us every morning. it’s so big that we really only need food for dinner and we’re set for the rest of the day. (for example: today was taquitos with avocado, shredded chicken and veggies in mole sauce, pineapple, kiwi, coffee, juice, bread) and, it’s included with our room. last night the family hosted a barbeque on the rooftop terrace for their youngest son and his high school friends. they invited all of us up to join them. so, we took some beer to contribute and feasted on delicious steak tacos straight off the grill. if you’re ever in guanajuato (and i highly recommend that you come) you MUST stay at Casa de Dante: www.casadedante.com. you’ll get your exercise just getting to your room every night, but it’s definitely a great experience! Dante, the older son, runs the front desk. he speaks perfect english, but helps us with spanish when we have questions. he has traveled all over europe and wants to go back to germany for a master’s degree. he does some great app development and wants to study more. you can see one of his virtual tour guide apps for the city at: www.mastour.mx 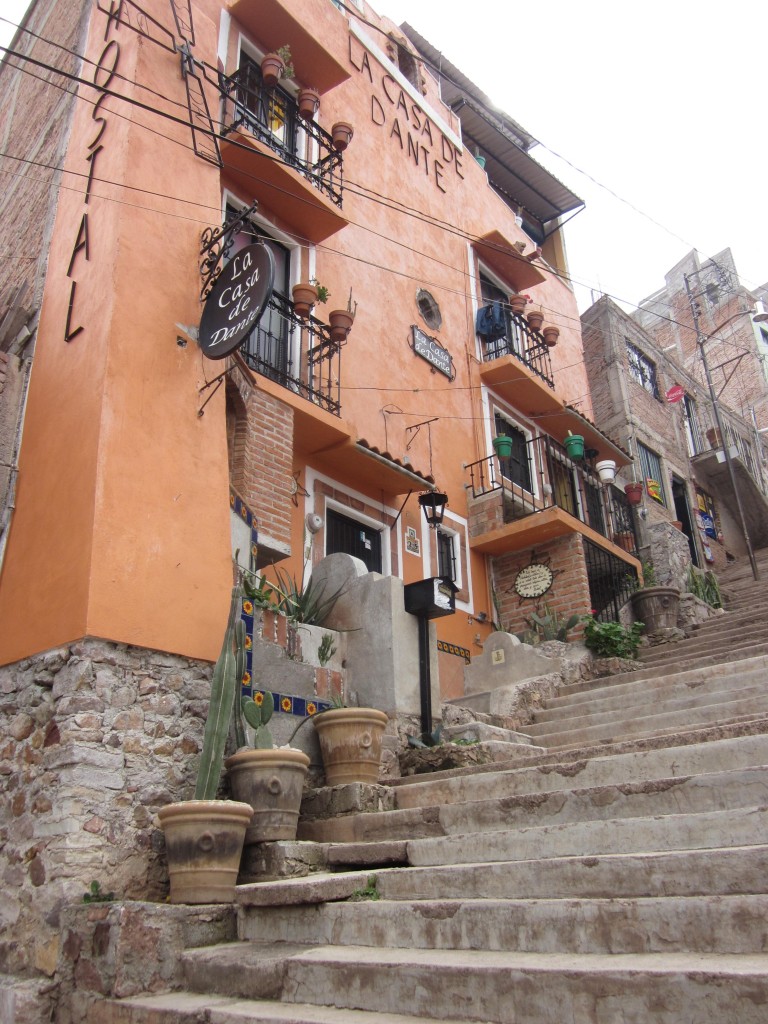 the hostel. our room was the one right over the sign and matt’s was the next floor up. the balconies were a definite perk because they offered beautiful views of the city. 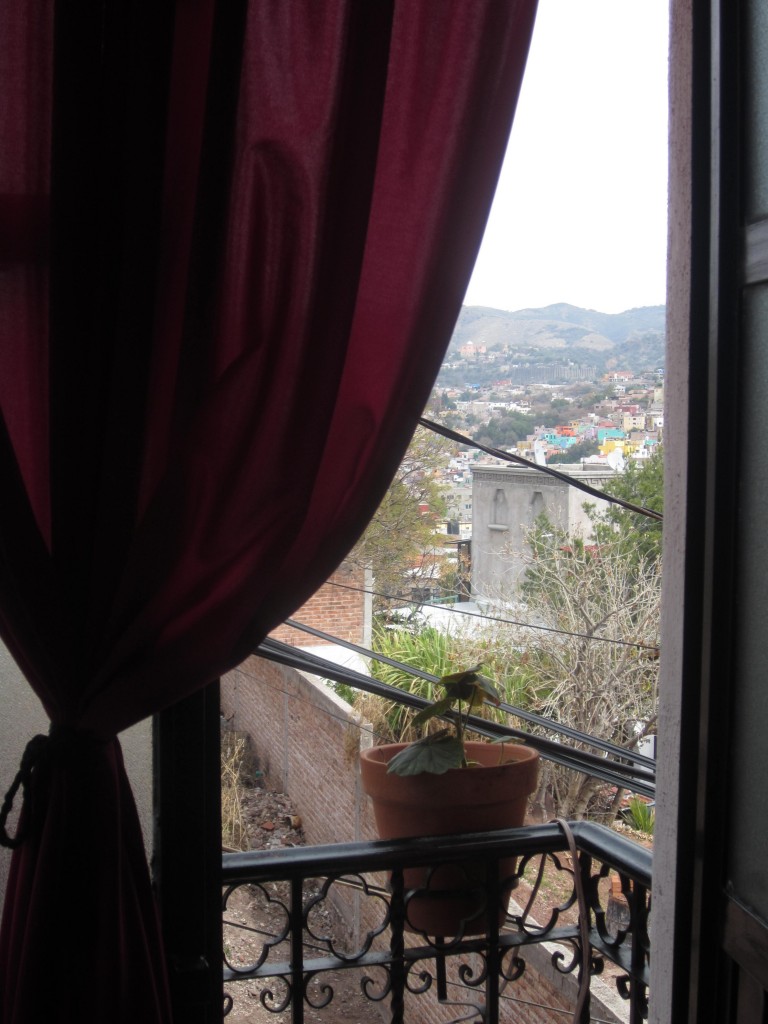 we’ve met some fellow travelers here who love it so much that they come again and again, or book a month at a time. it’s a very easy city to navigate and it feels slightly european. there are lots of foreigners running around. but, the city doesn’t survive on tourism (which is nice for us). it has plenty going on outside of that market.

while staying here, i’ve embarked on a new domestic task, which will probably become pretty normal in the months to come… bathroom sink laundry. while bob did some work yesterday afternoon, i decided to be frugal and wash our clothes by hand. otherwise, i would have had to pay someone else to wash them. we have a lovely balcony in our room. so, he rigged up a clothes line for me and i got most of our dirtiest items done in an hour or so. we’re also learning quickly that there are certain pieces of clothing that will never come clean again, with the lack of deodorant and the insane amount of sweat that transpires on riding days. (sorry, if that’s too much information) but, our current reality is much more in touch with our natural scents. it’s something that i think americans are the worst at… being ok with natural human scents. so, i’m learning to deal with it and to have somewhat clean, if still a bit odorous, clothing! 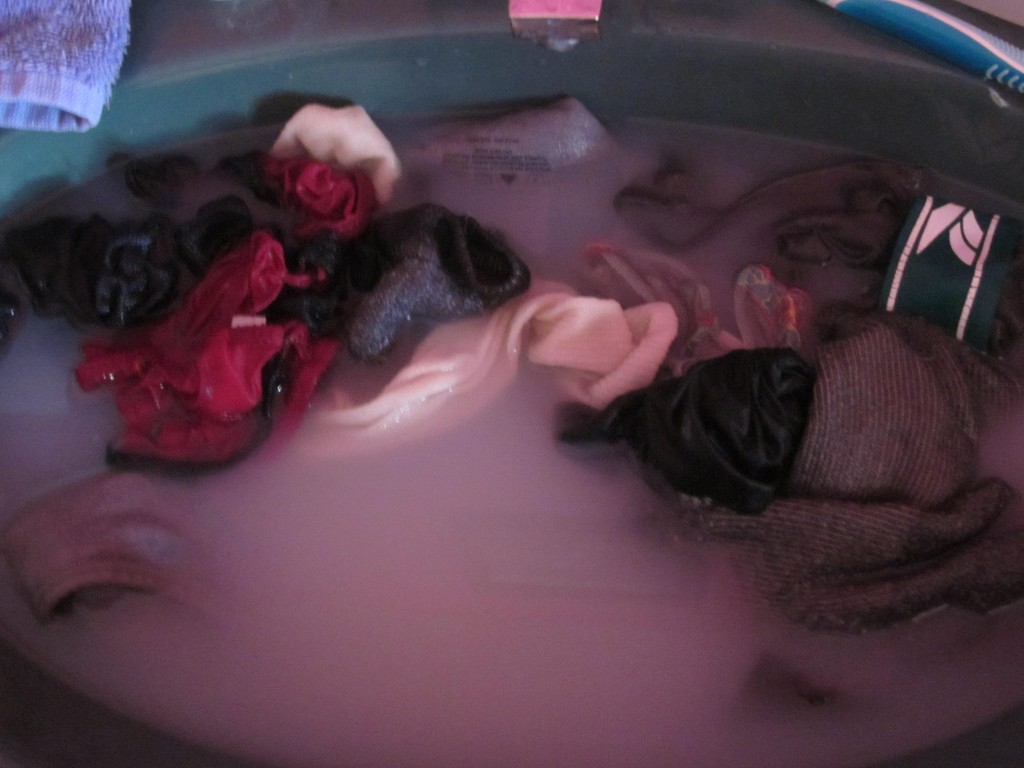 load #1 soaking in lavender scented dr. bronner’s. the lavender really helps to give the beyond help items a fresher smell.

and here’s the make-shift clothes line that bob constructed on our balcony. our clothes were all dry by the next morning!

our last full day in guanajuato was a lazy one. we toured the home where diego rivera was born. it was pretty cool to see his early work and how it shaped what he later became known for in his murals. then we just sat around in one of the big plazas for awhile. it might have been the cerveza consumed at the barbeque last night, but we were all moving pretty slow. we grabbed a fire roasted chicken from a lovely little shop and used it with the veggies we had bought at the market to make some chicken tacos. in total, we spent under $10 to feed the three of us.  guanajuato has not been too bad on the food budget at all. we definitely got spoiled by the amazing breakfast served every morning. 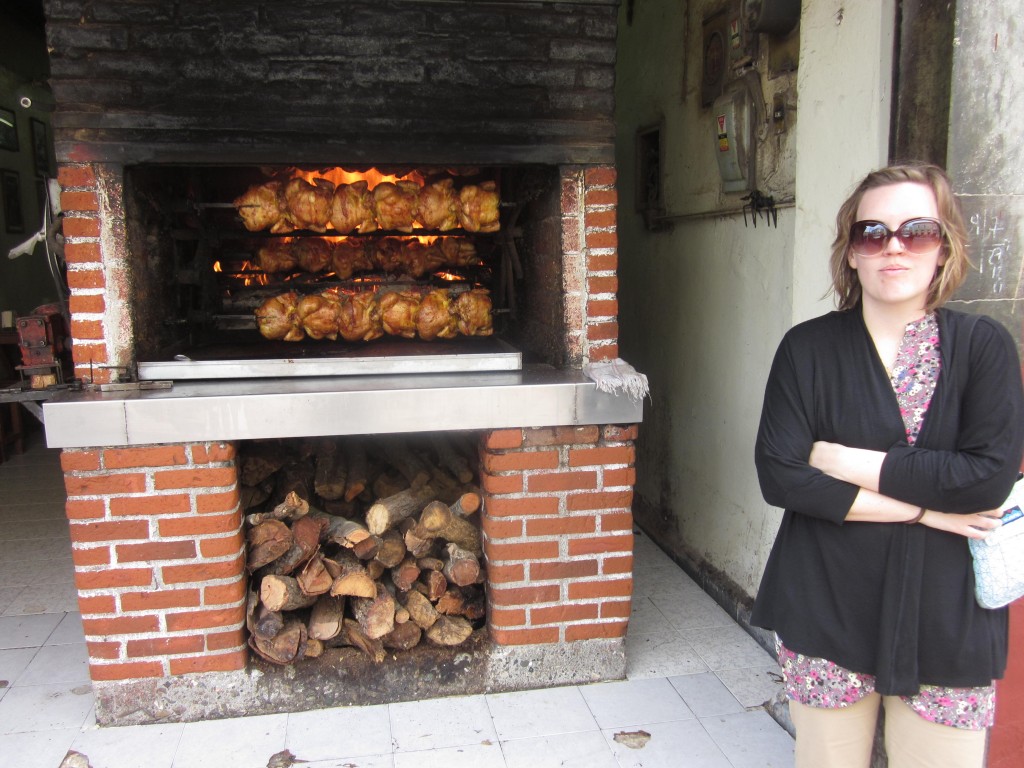 posting up by our dinner. yum! 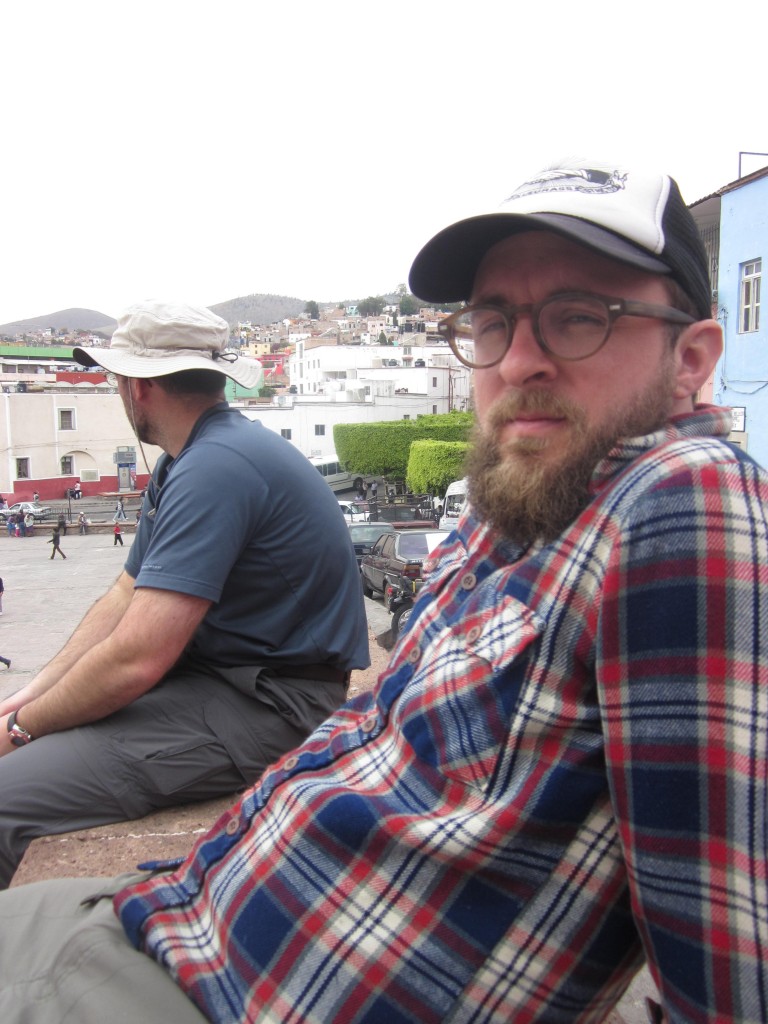 taking it easy at the plaza, watching some little boys play soccer. not a bad way to spend an hour.

the colorful houses will never get old to me. i can’t get enough of these beautiful cities.

Response to the birthplace of mexico

« zacatecas in photos
and the road goes on… »