we’ve had a few LONG days of riding. they were beautiful days, both through some pretty impressive mountains. but, they were exhausting for all of us. we did over 300 miles both days (which doesn’t sound like a ton, but add curvy mountain roads to the equation and it takes pretty much all day). the first day we took the toll road around mexico city. it was the best way to completely by-pass the capital and still make good time to puebla, our hoped for destination for the night. even though we took the long way around the city, we were still engulfed in smog most of the afternoon. mexico d.f. is a city like none other. i don’t suggest you visit if you have any asthmatic tendencies.

almost $30 later (per bike) we got to our destination. but, the toll roads are fast, well paved and very direct. it took us awhile to navigate through puebla, though. it’s a fairly large city. and we ran into a parade which was blocking the exact street we needed in order to get into the center of town. but, a nice man helped us by telling us to just drive straight through the little park that was in front of us. he said it would be no problem. so, bob (being more fearless than your average person) just meandered his way through the little park, complete with food stands, a fountain, and some confused looking people. pete waited to make sure we made it and then quickly followed. we had to jump off the curb on the other side to make it back onto the road. but, motorcycles can do things other vehicles just shouldn’t attempt.

we found our cheap hotel right in the center of town, went out to find food, check out the insanely fancy basilica, and headed for bed. i didn’t even take out my camera. we were all super tired and had another crazy day of riding ahead. but, the next morning proved to be extremely picturesque. puebla has a volcano right outside of the city. and, we rode with it in our sights for a least an hour or so. we popped off the road to catch a few photos of it mid-morning. 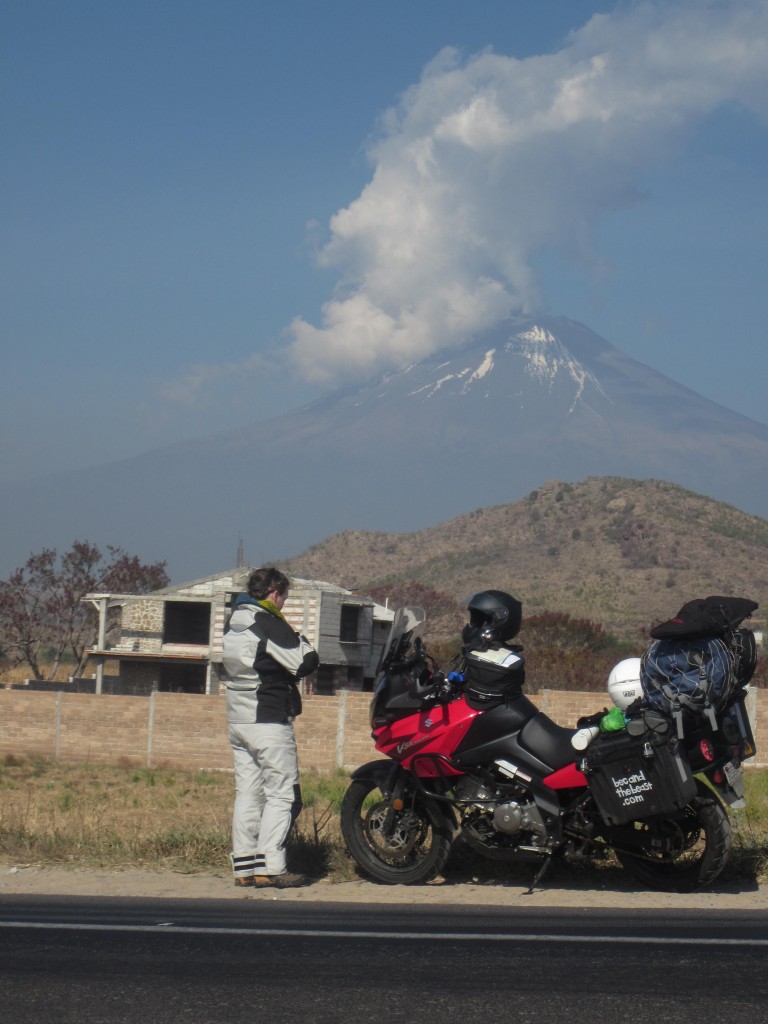 the volcano: popocatepetl, the smoke that’s visible had puffed out of it earlier on our morning drive. it was quite a sight! 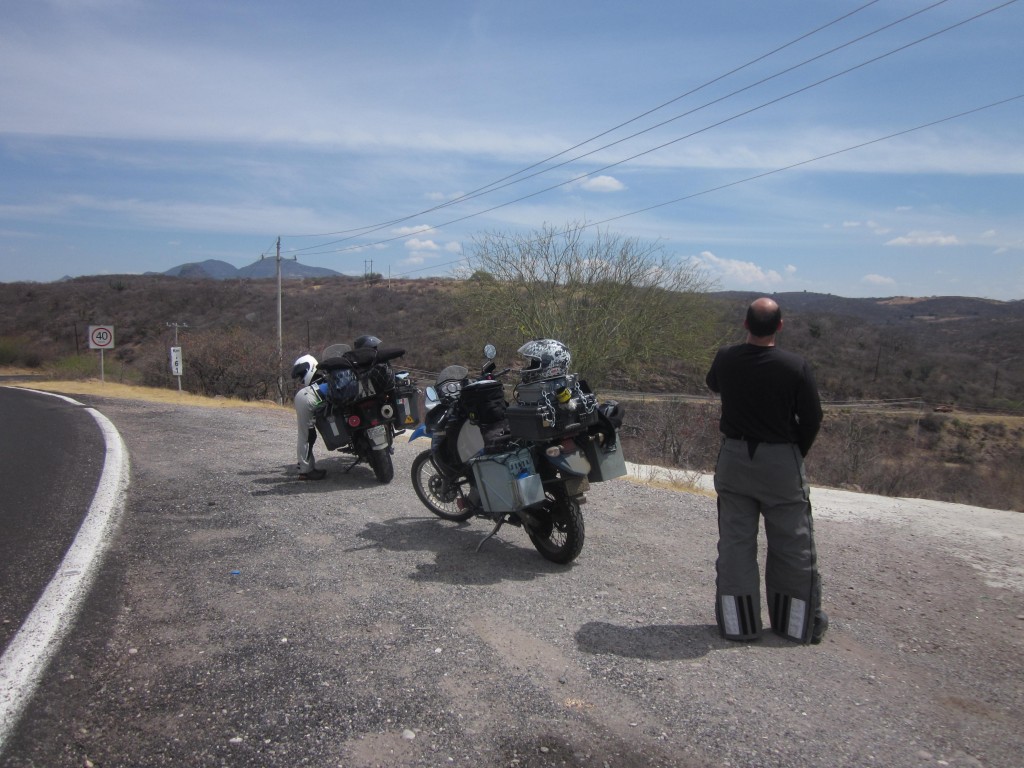 one of our roadside stops in the mountains. yes, that’s me laying on our bike on the left. it had just started to get hot so i had to shed some layers and was happy to have the chance to stretch my back for a moment.

we survived both long days of riding and are still learning valuable lessons that will help us on down the road. navigating roads that aren’t well marked, finding gas in rural areas, and dealing with quick changes in temperature are just a few. but, hey, we all signed on for an adventure and that’s exactly what it is. driving through the mountains has been so beautiful, though. when we (if we) reach flat land again, i think i might go into withdrawl.

here’s the t-shirt that federico (remember him from way back in zacatecas!?) gave me. it’s apparently another one of his hobbies. thanks again federico! i love the shirt and really enjoyed meeting you. 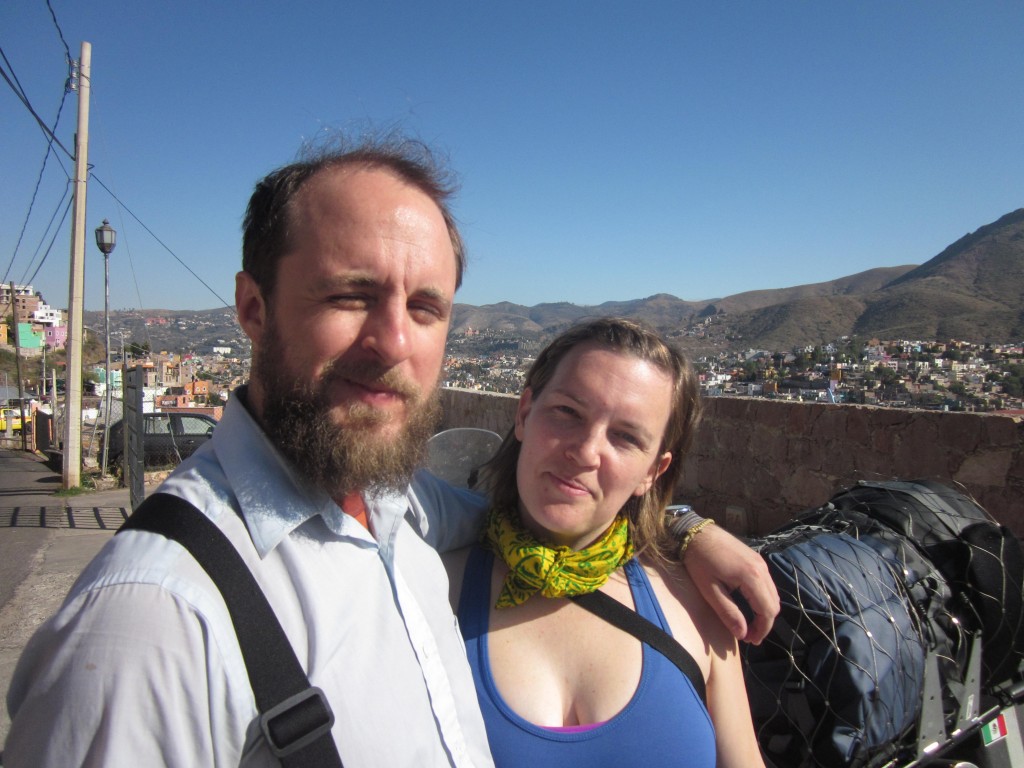 me and bob squinting into the sun the morning we left guanajuato. the view from the top of the hill was great! thanks lee, from taking this shot for us.

tonight, over a shot of mezcal, bob and i realized that we’ve been on the road for a MONTH! happy one month of travel to us! i can’t even imagine what the next four will bring. but, if they’re anything like the first one, they’ll be full of beautiful towns and beautiful people.

Response to and the road goes on…

« the birthplace of mexico
oaxaca, part one: the city »