oaxaca continues to be one of my favorite cities ever and I’m super lucky to be visiting it for the second time in my life. (hopefully not the last…) it’s full of life day and night. there are people everywhere but it’s not a huge city. you can run into live music on any block at any moment (partially because most of it is transcient). there are taco stands, hot dog stands, corn, sweets, fruit…. you really don’t have to ever set foot in a restaurant, but when we have, those haven’t disappointed either. we decided even before we got here that we would take a few extra days to explore the city and surrounding area and to relax a little. i’m so glad we did. first, because we all needed a few days off from the road. and second, because there is so much to do here. hence the three part post from oaxaca.

bob and I took the first full day to just tool around and see the city. we went to the Benito Juarez market (which is huge) and found a few items for ourselves in the leather section. by the way, Benito Juarez is the only indigenous president mexico has ever had and he did amazing things for the country like create public schools. there is a street named after him in every city and he was born in oaxaca. there is your (tiny) mexican history lesson for the day. and, here are a few sights from the city…

the church in the zocolo (the city center) at night. there are always people milling about in this area, no matter what time of day or day of the week.

a little coffee shop/bar that was recommended to us by a local. the artwork in the little courtyard area was pretty cool. 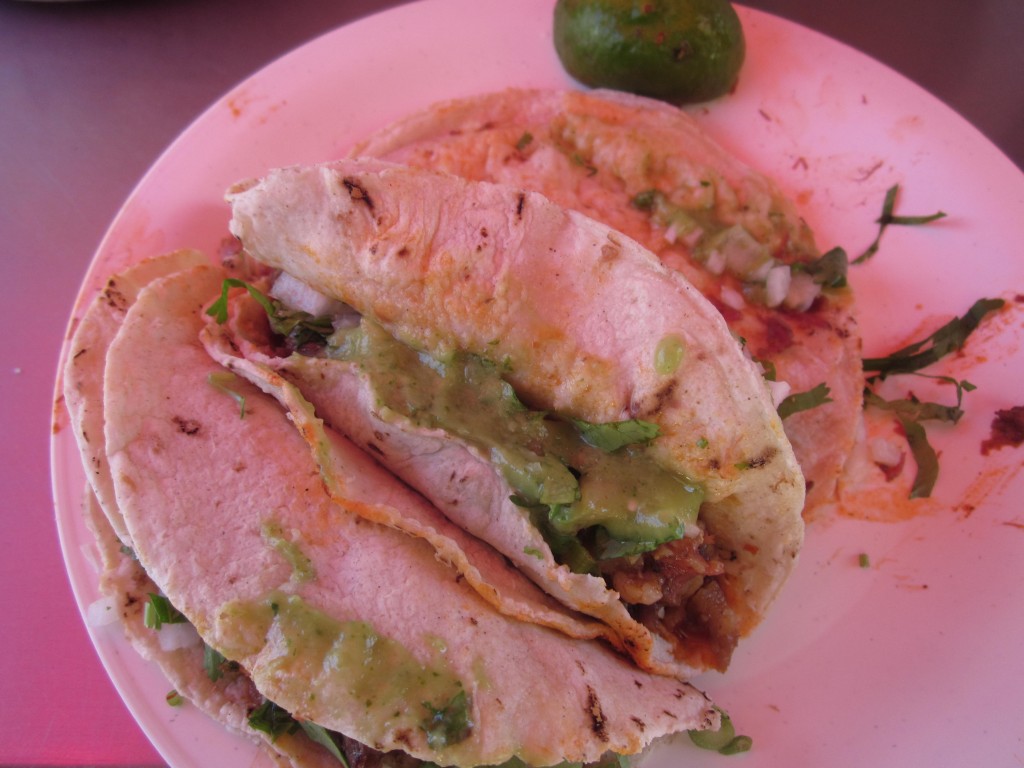 my lunch from one of the millions of taco stands in the city. it cost around $2, and was pretty good. we found a better one that night, though. so, we’re definitely becoming taco stand officionados. 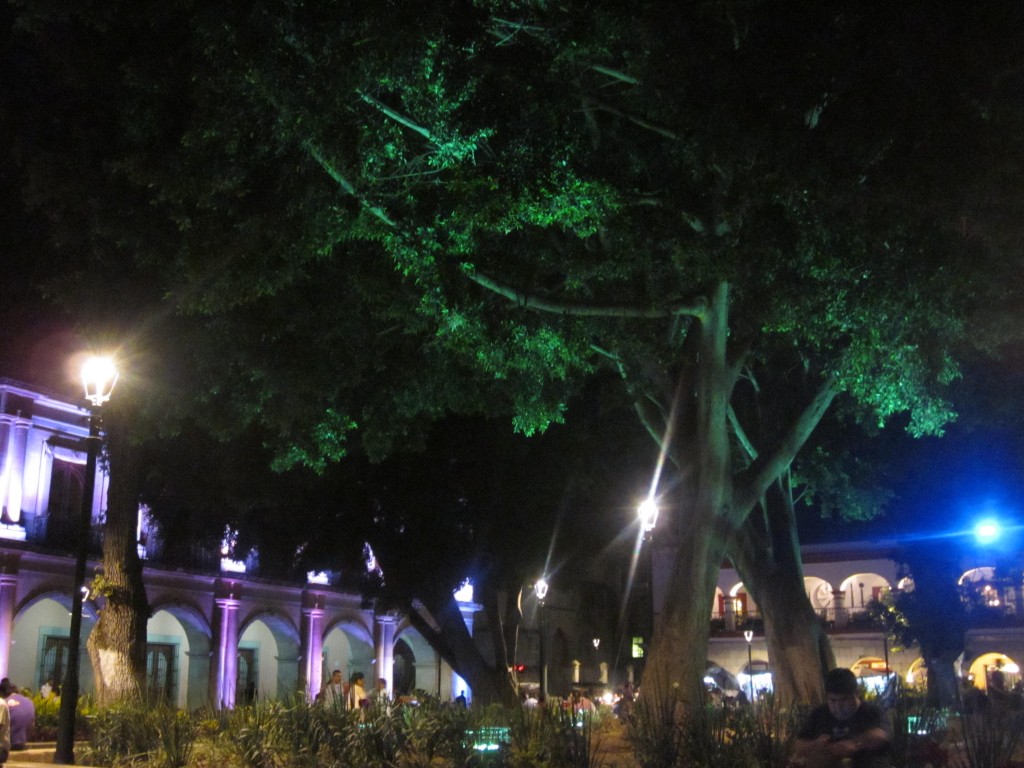 more of the zocolo at night

bob and I decided to have a date night here. so we found a vegetarian restaurant near the zocolo. we have been eating more meat than seems heealthy for a person to consume, so a vegetarian meal was a novel idea. when we entered we were a tiny bit skeptically. we looked around and saw only white people and thought, “oh no, it’s a tourist trap!” but the waiter showed us a menu and we decided to stick with our decision. it turned out to be delicious! bob got taquitos with seasoned tofu and raisins, and I got vegetable crepes in a tomato sauce. the best part of the whole experience was our waiter, augustino. he speaks 10 languages and had three tables: dutch, french, and us americans. and he would hop from table to table speaking each person’s native language! it was quite a dining experience. he was also a big talker and told us where to go for live music and good bars. we hit it off so well with him that he asked for a picture and he was willing to oblige and to stage a pretty good picture.

if you found your way here, augustino, thanks for a fun evening! we hope to visit again one day and take your cooking class.

one highlight at the zocolo was on wednesday night, our last night in oaxaca. apparently every wednesday they have dancing and a live band. bob and i got pretty excited because if you know us, you know we love to dance. we thought it would be fun. but, as soon as we walked up to the gathered crowd we quickly realized it was a bit more of a formal affair than we had thought. older couples dressed to the nines were out on the dance floor. they all knew the steps and there was not a foreigner in sight. so, we joined the crowd in watching the dancers and bob recorded some of the band. here is an idea of the dress code for the dance floor.

this couple was on the younger end, but they were a good example of the expected dress and they had their moves down to a t. 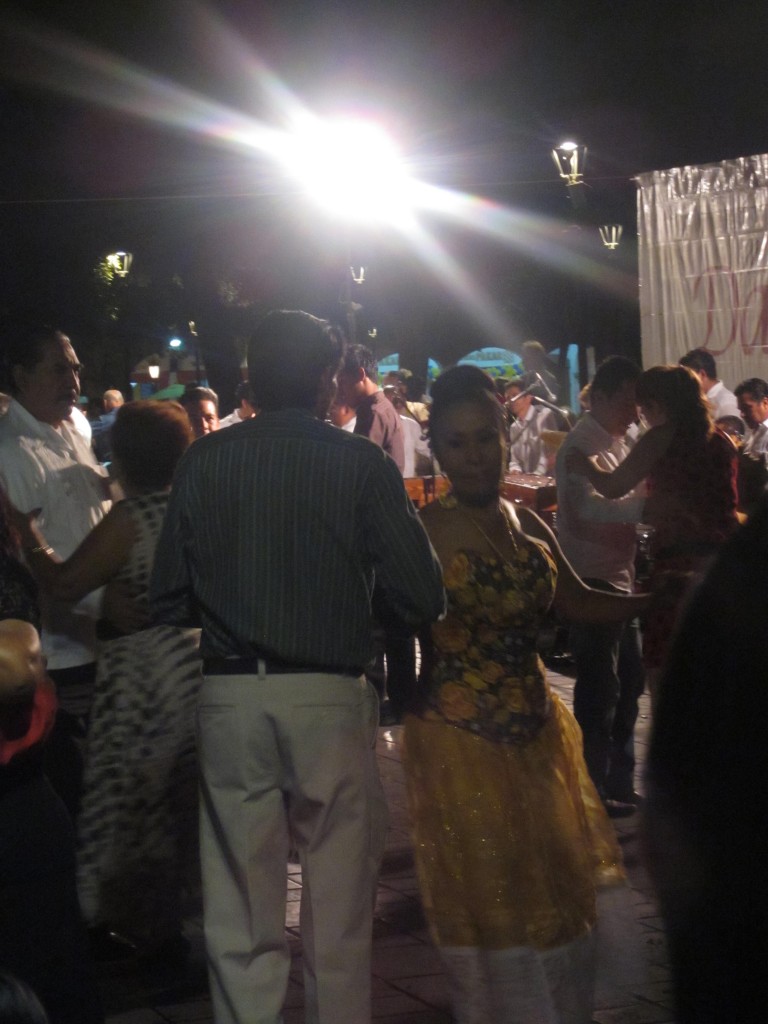 this one’s a bit blurry, but i wanted you to see the fabulous dress of this woman. oaxaca is known for its textiles and embroidery and her top was completely embroidered. i would love to have an excuse to wear something like that out of the house on a regular old wednesday night!

so, hopefully that gives you a snapshot of oaxaca. i’m a little sad to leave, but after a month on the road, i actually can’t imagine staying put for too long right now. it’ll be interesting to see how i feel about that five months from now. more from oaxaca to come soon. i’ve only given you the tip of the iceberg as far as our experience here goes…

Response to oaxaca, part one: the city