on our second day in oaxaca we decided to take a day trip out to a ‘warm’ sulfur spring up in the mountains. we were told it was a must see while in oaxaca. we got on the bike (without all our extra gear, which is kind of novel after being loaded down day after day). we headed through the hills surrounding the city, which were beautiful to travel through. and, we stopped on the way at a tiny town with some ruins, called mitla. we were hungry, so our first stop was a little restaurant in the town. we got some food and saw from a sign on the wall that they sold chocolate by the kilo. we are in mayan territory, so we were pretty excited to try some mayan chocolate.

so, when we got our bill we asked for a kilo, not quite sure how much that would be. but, expecting it wouldn’t be too much. well, here’s what a kilo of chocolate looks like… 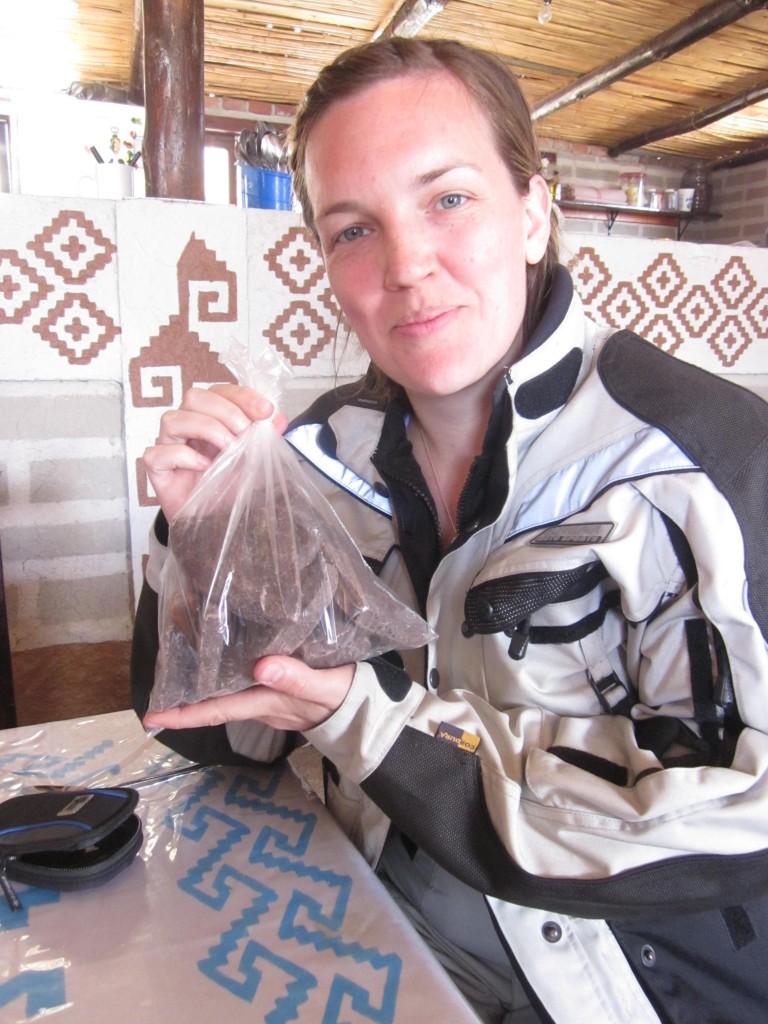 so now we have enough chocolate to last us until costa rica! we tried to ask if we could just take a half kilo, but the nice lady who cut it up for us wasn’t budging. she said it would last forever and i think she was right. it’s really grainy, so i don’t think it will melt and it’s got lots of sugar and cinnamon in it. yum! we’re going to try cooking with it soon. (well, as soon as we have use of a kitchen again.)

so, after our chocolate buying experience, we headed on up the mountain to heirves el agua. we had to drive through a tiny mountain town to get there. and, it had some spectacular views. once we got to the spot we were looking for we walked down the hill from the few little vendors and found this:

wow. it was so beautiful. the clouds only added to the scene. we were excited to sooth our sore muscles in the warm water and quickly got ready to take a dip. 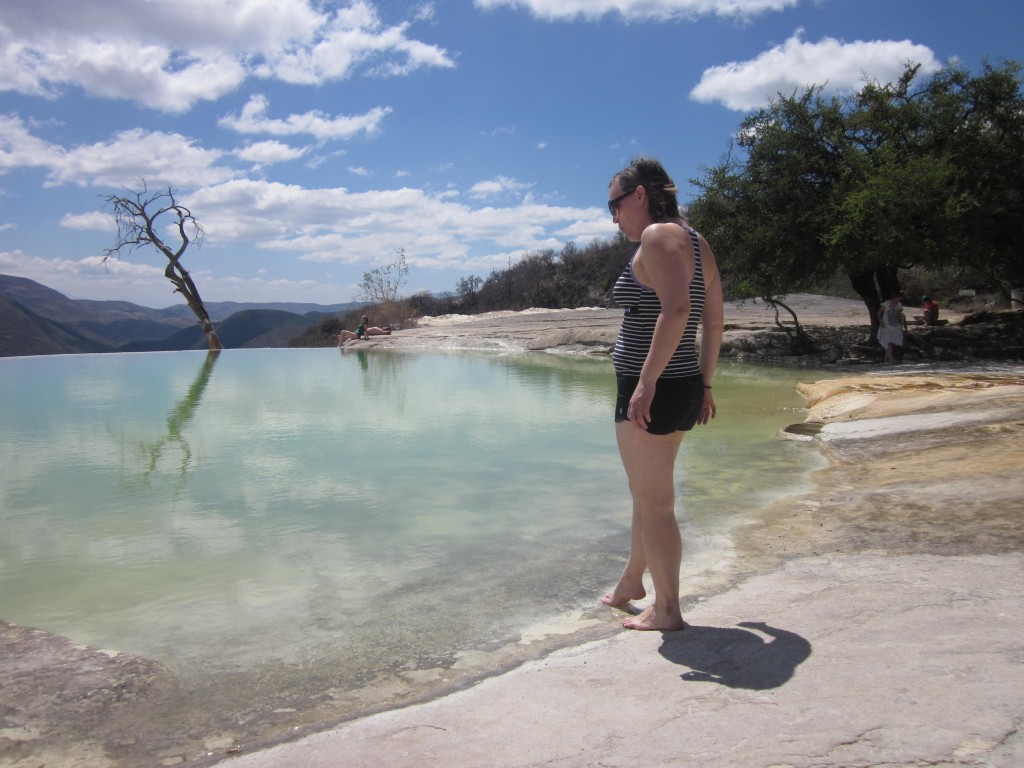 but, when we tested it out we found it to be quite cold. apparently the only area that is the slightest bit warm is the source, right where it’s flowing out of the rocks above. so, after careful inching on my part and a shocking dive on bob’s part, we both got in and swam around for awhile. it ended up feeling great once you got yourself used to it. 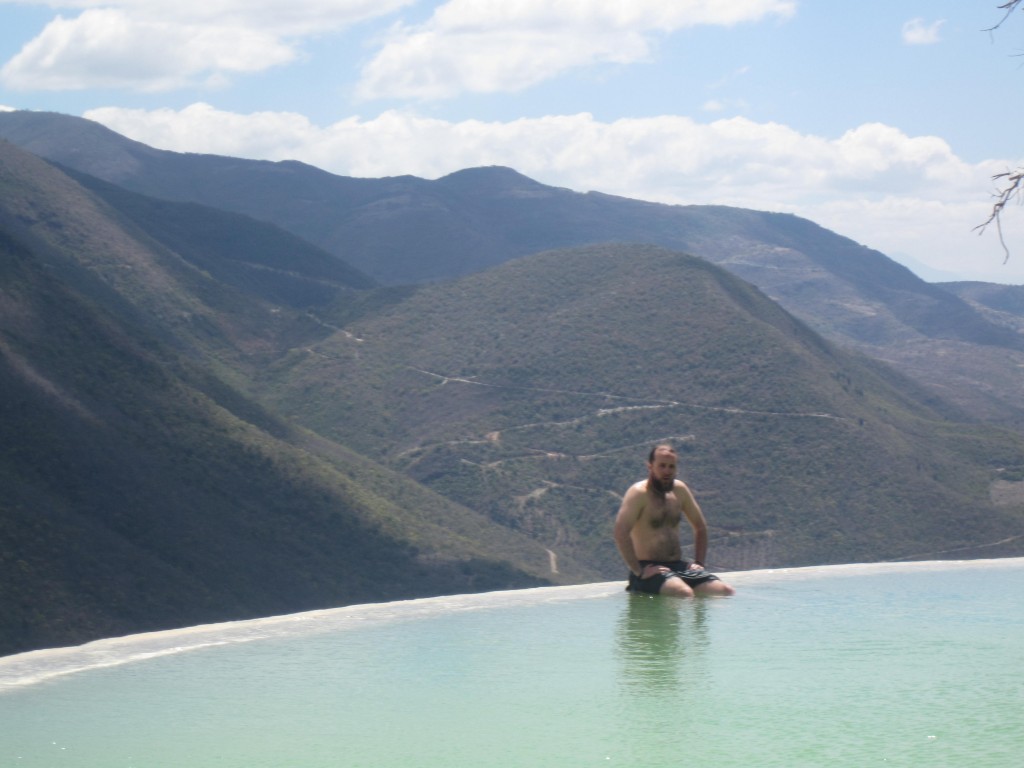 bob is so much better at cold water than i am. but, i was proud of my slow effort to get all the way in. it was definitely worth it because drying off in the sun felt wonderful. 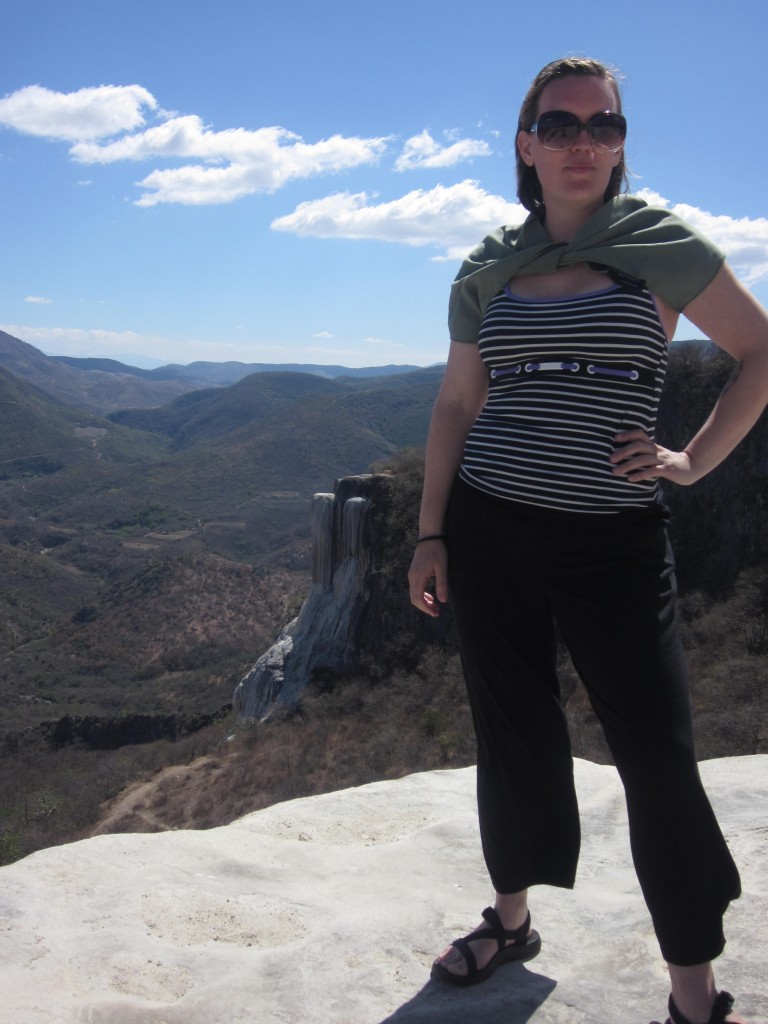 behind me is a petrified waterfall formed from calcium deposits, cascading down from the hill where the sulfur spring was. you might think i’m wearing the cape of shame here. but, no. you’re mistaken. i’m wearing a cape of sun protection because my skin is still a little too white. that will hopefully change in the coming months. but, i’m taking it slow. i know what my irish-german skin can handle (and it isn’t much).

the second day in oaxaca was pretty spectacular. we really loved getting out of the city and surveying what the region is like. oh, i almost forgot, on our way back into the city we jumped off the road (literally right on the side of the mountain) to stop at a mezcal fabricadora. basically, it’s a little operation that looks little a moonshine set up in the hills of kentucky. but, anyway the folks there were super nice and told us their process of cooking the agave over an open fire, putting it in a pit and squeezing the juice out of it with a huge stone wheel and a mule, and then distilling it for a few days before aging it in a barrel. (we talked a lot about the bourbon process and where we’re from and the couple running the little place tried to look interested) they gave us a taste, which was an entire shot and sent us on our way. a good, good day in mexico…