we decided that since we were so close to the pacific ocean, we had to take a night and go get in. so, we made a plan, consulted google maps (which ended up being totally wrong) and talked to some guys who had traveled from oaxaca to the stretch of beach we were shooting for. it turns out the route we thought we’d take was totally blocked due to a local protest. this is a pretty normal occurrence for oaxaca, well central america in general. but, it was great information for changing our route. it really pays to talk to people and not use the internet for all your information needs!

so, we headed out expecting to be hot all day as we got closer to the beach because oaxaca city was already pretty balmy. but, soon after we left the city we began a long climb into the mountains, and before we knew it we were driving through the clouds at 9,000 feet. needless to say, we weren’t hot. but, we passed through some amazing little mountainside towns and got the best views i’ve had so far of huge green valleys and crazy drop-offs. 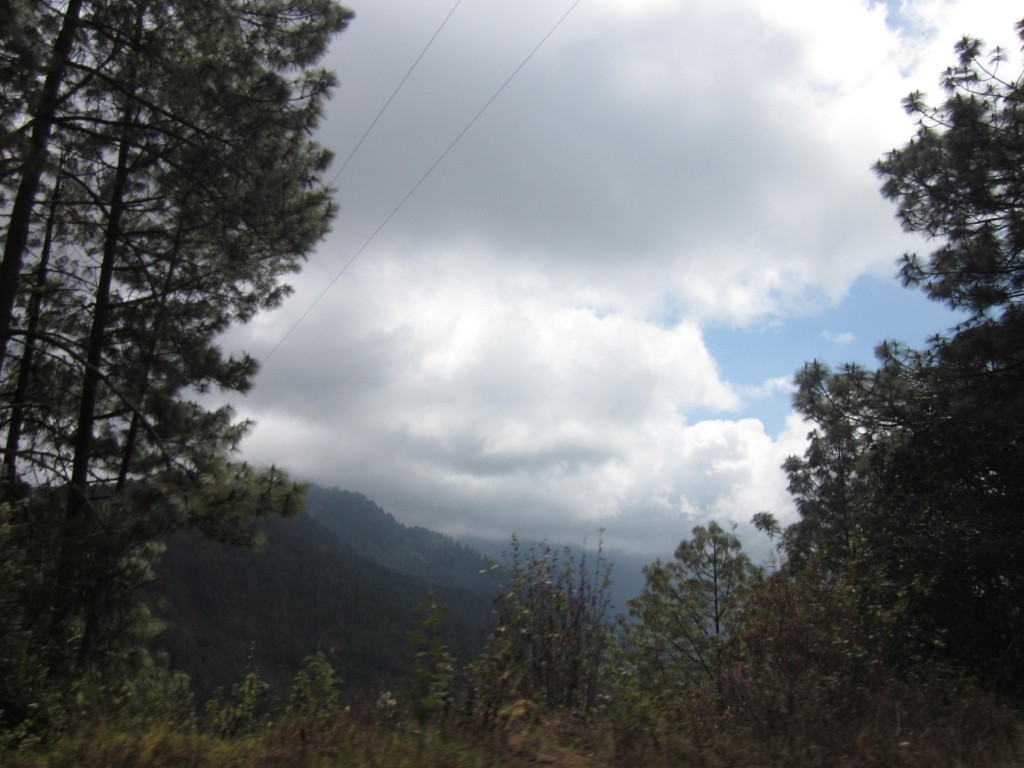 a snapshot of our view into the mountains, but it doesn’t do the real view any justice 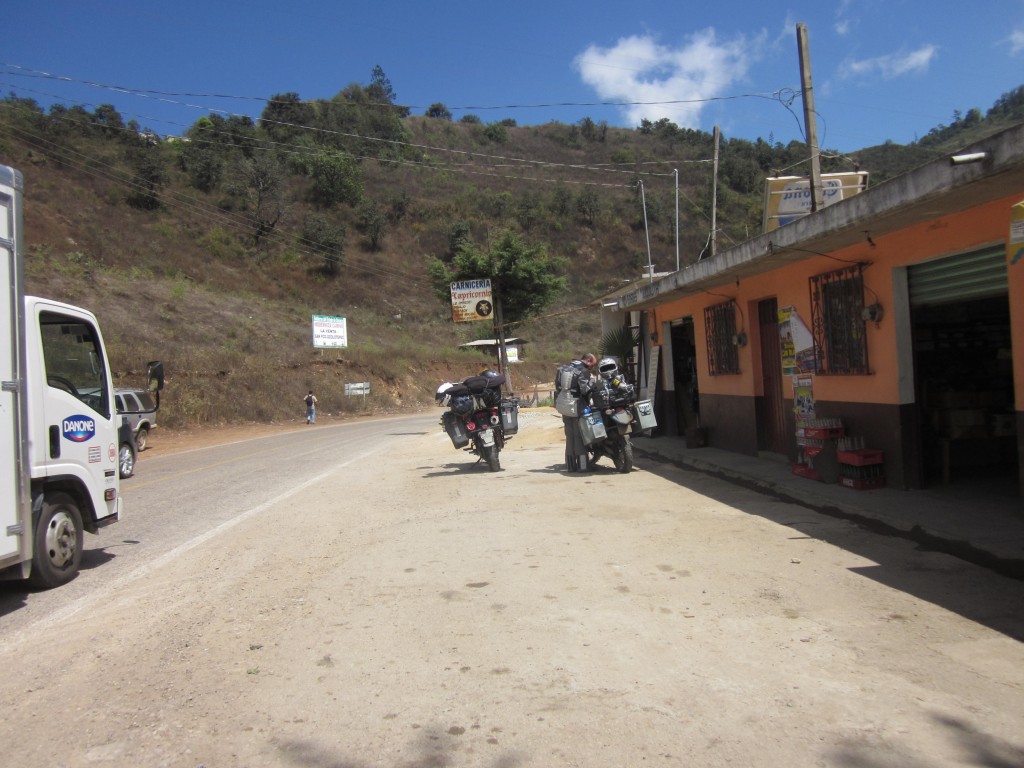 here’s the tiny town we stopped in for lunch. we got some deliciously greasy tacos, which would not sit well on my stomach in the curvy downhill roads ahead. but, once again, we’re still learning valuable lessons. the lesson for that day: pack a non-greasy lunch when traveling through crazy, curvy mountains.

after our stop we drove through some incredible pine forests. they were extremely aromatic. and actually helped with the motion-sickness. but, as we began to descend in altitude the curves became nothing but tight hairpins. there was not a straight-away in sight for over two hours. this was the windy travel i’ve ever done, and i’ve been on some crazy roads in the past. but, we took it as slow as possible and took breaks along the way so that i could let my head and stomach get back to normal. one huge help were these little candies we have, called gin-gins, that our friend natasha gave us before we left. they’re strong ginger chews and they definitely help with the stomach issues that come along with motion-sickness. 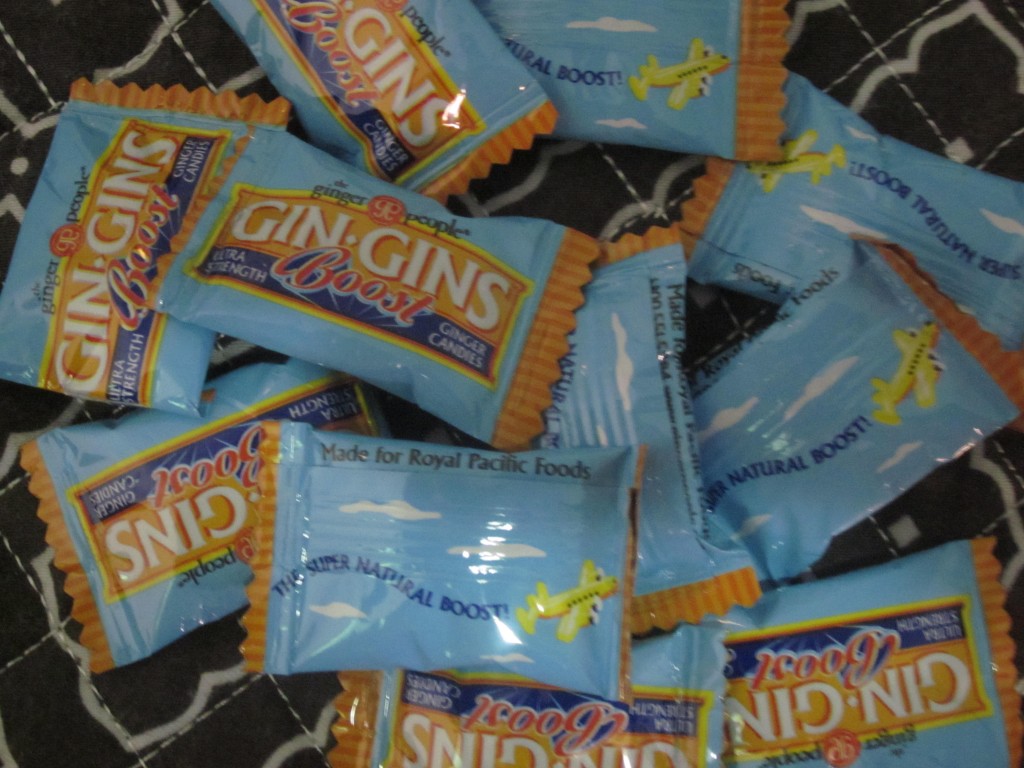 thanks so much natasha! i’ll bet you had no idea how important your little gift would be for me. but, i’ll be very sad the day we eat the last one!

we finally made it out of the mountains, only a few miles before we hit the ocean. but, the road started to open up and i immediately felt better. we made it into the small fishing harbor of puerto angel and got off the bikes for a look at the water and a quick breather before finding a hotel. as soon as we cut the engine, we were approached by multiple men trying to help us find a hotel, ask us where we were from, and generally interested in our spectacle. mostly, i think they just like to promote their own business or their friend’s hotel. but, we ended up getting great info from them, because one guy told us that if we wanted to stay at the hippy (somewhat nude) beach of zipolite, it was only 5 minutes down the road. and, after finding out the price of the beach front hotels at puerto angel, i knew zipolite would be the better option. i had stayed there ten years back when i backpacked through mexico. and, the beach was beautiful and definitely off the beaten path.

so, we jumped back on the bikes and headed to zipolite. i expected some changes in ten years, but honestly, not too much was different. there was one nice four story hotel that had been built, but it was for sale and unoccupied. the rest was the same: a string of beach front cabanas and hammocks for rent that spanned about a half mile (maybe) of beach between two huge rocky hills that fell into the ocean. zipolite is definitely one of the prettier beaches i’ve seen.

so, bob and i trudged up and down the beach in our gear (we took our jackets off, but the pants and boots are more of a process), in search of the right place to stay for the night. prices have definitely gone up since i was there ten years ago ($2 for a hammock back then). but, we found a lovely two story cabana where bob and i could rent hammocks on the second floor, over looking the ocean, and pete could get a room. our hammocks cost $6 apiece. but the place was nice, the bathrooms were clean, and it was a lovely night of sleep right on the water. 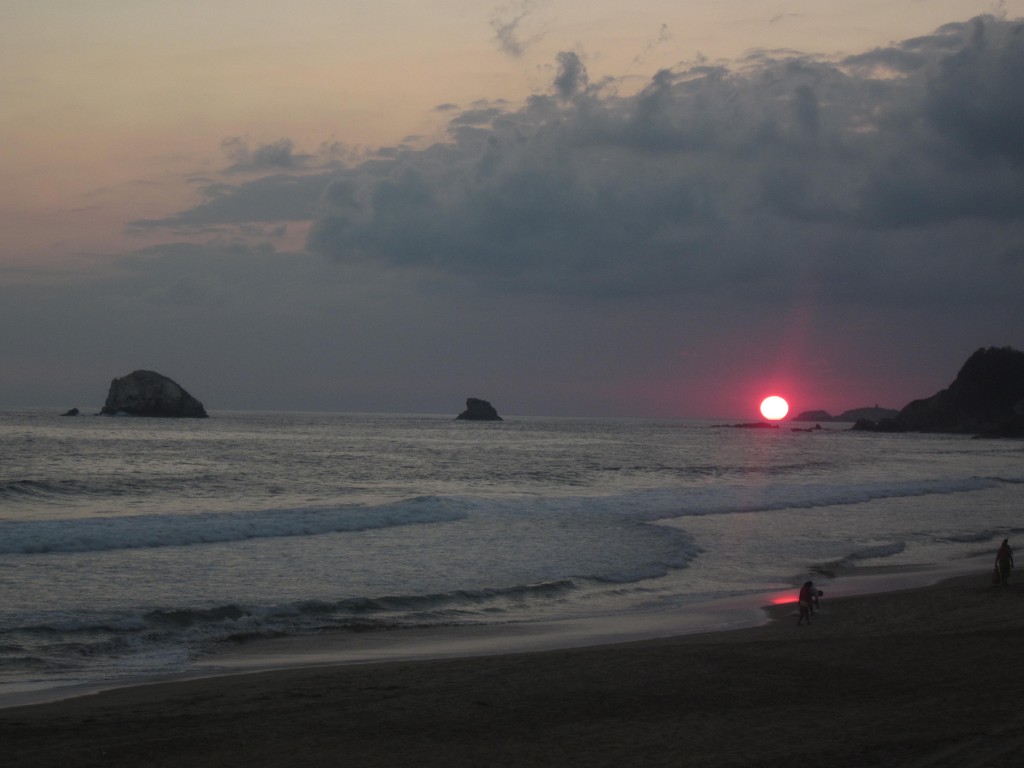 we caught a beautiful sunset right after we settled into our cabana. bob got a few photos of it before it disappeared on the horizon.

we walked down the beach after sunset in search of some fresh seafood. in this area, you can’t get a fish that wasn’t caught that morning. so, we were excited to  try it. we found a lovely little restaurant (right on the beach, of course) and they had tons of fish options on the menu. our server was about 12 years old, and his dad manned the grill. but, he was super professional and we got a kick out of it.

i’m pretty excited about my dinner, which came in a steaming foil bag with fresh steamed vegetables. bob’s was ‘veracruz’ style and came with a delicious tomato sauce and lots of tomatoes. it was the best meal we’ve had so far. even pete, who got a burger with ham and pineapple thought his was great! 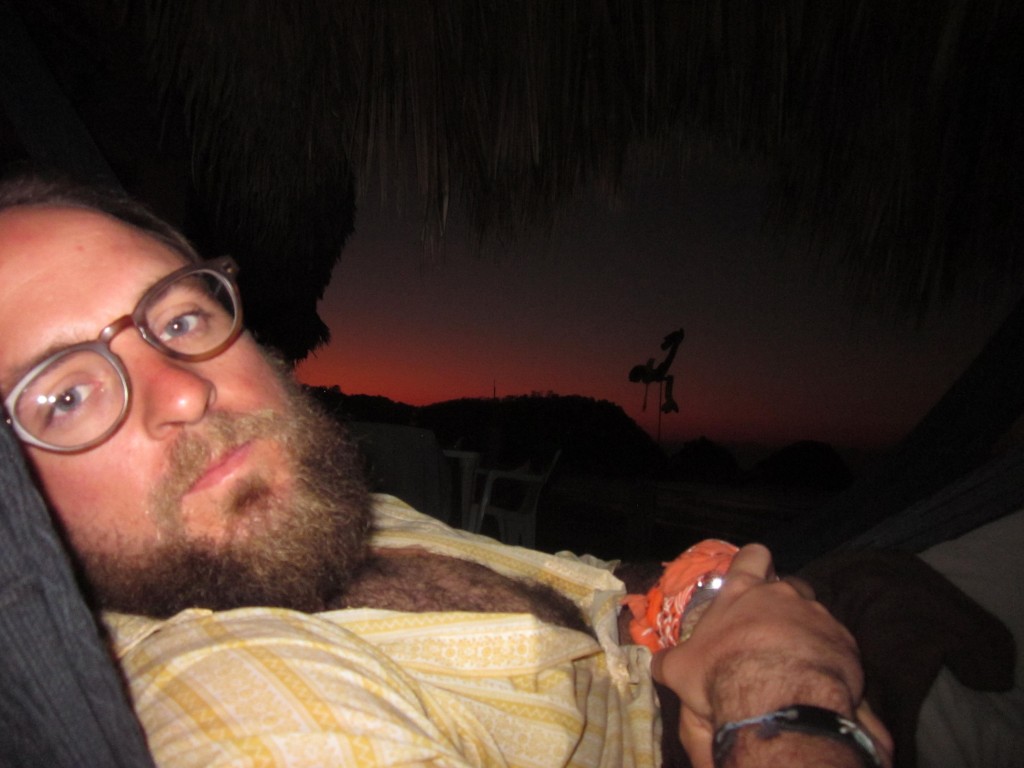 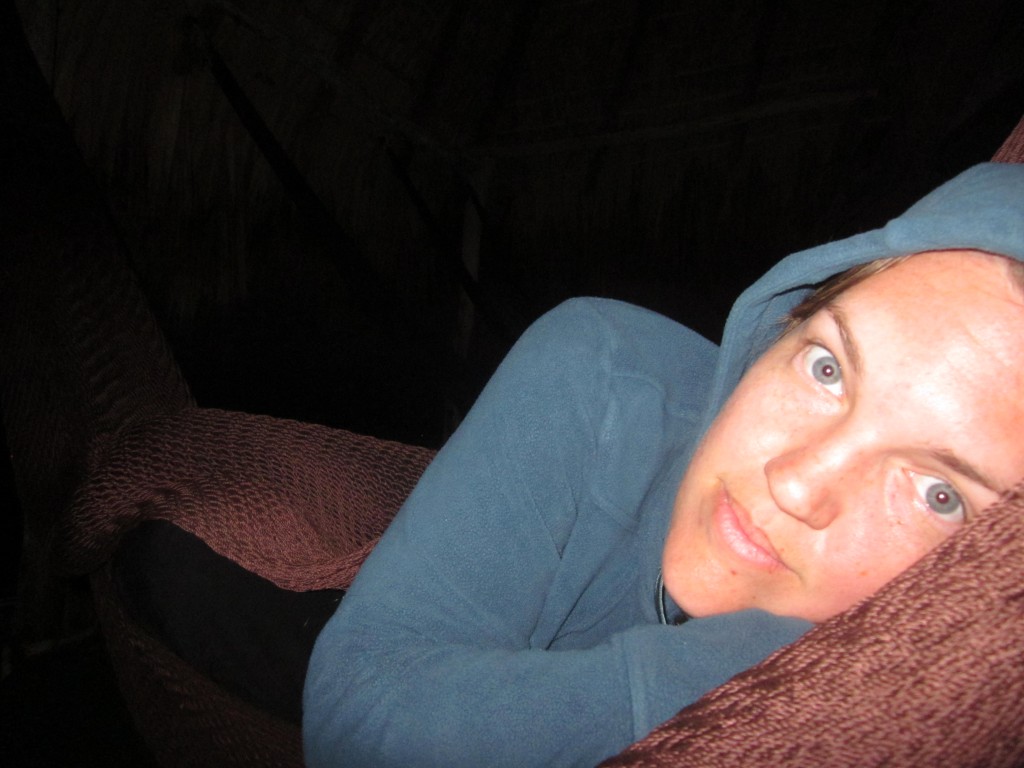 our beds for the night, sleeping in a hammock was super comfortable

we also happened to be at zipolite just in time for their two day town festival. lucky us! so we got to here a lot of singing, prayer, saw dancing, paper mache dolls, and were awoken at 5:45 am to the kids of the town playing a little band concern. all the festivities happened right next door to us. so, when we first woke up to fire works and the band playing, we were a bit grumpy. we thought it was the middle of the night still. but, not 5 minutes later the sun started to rise and pete came out with his camera. we all got to be up for sunrise, which was a first for me on this trip. 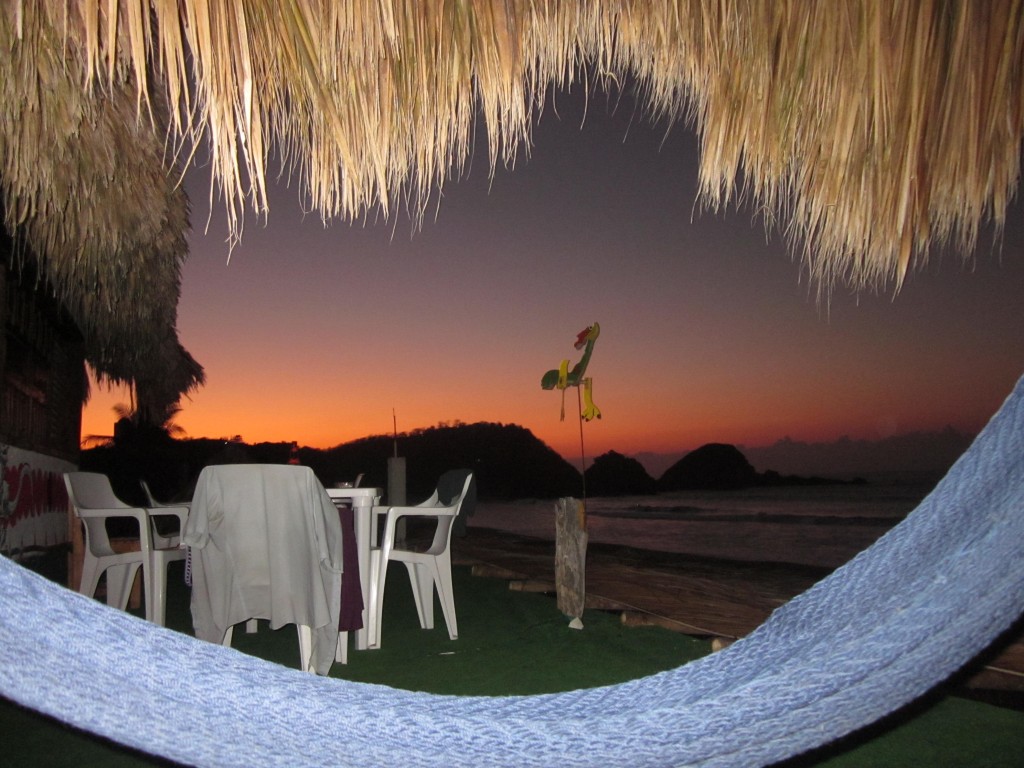 our view of sunrise from the hammocks

so, after a quick dip in the ocean that morning and a walk along the beach, complete with views of the lovely nude sunbathers (pete was a little sad because most of them were male and over 50) we took quick, cold showers attempting to help with having all our gear back on. but, we were sweating as soon as we started to pack. the rest of the day was a hot one. but we made our way to juchitan, a small city tucked a little further into the hills. we wanted to position ourselves for heading back up into the mountains the next morning. so, it was a good, but hot stop for the night.