wow, it’s been awhile. we’ve been doing a lot of traveling this past week or so. and, I last left the blog in antigua. so, let me try and catch up. we did our first stint of backtracking after leaving antigua because we were told by quite a few travelers that lago atitlan was a place that was not to be missed. i expected it to be remote and fairly bare-bones after the hustle and bustle of a tourist city, but that’s not quite what we found. the main town on the east side of the lake was called panajachel. it was a hodge-podge of hotels, restaurants, and souvenir stalls pretty much completely geared to tourists. we found the super cheap, yet super clean and friendly hotel that had been recommended to us pretty quickly, though, and headed down to the lake to figure out our plans for the next day. and, we wanted to take in the view. 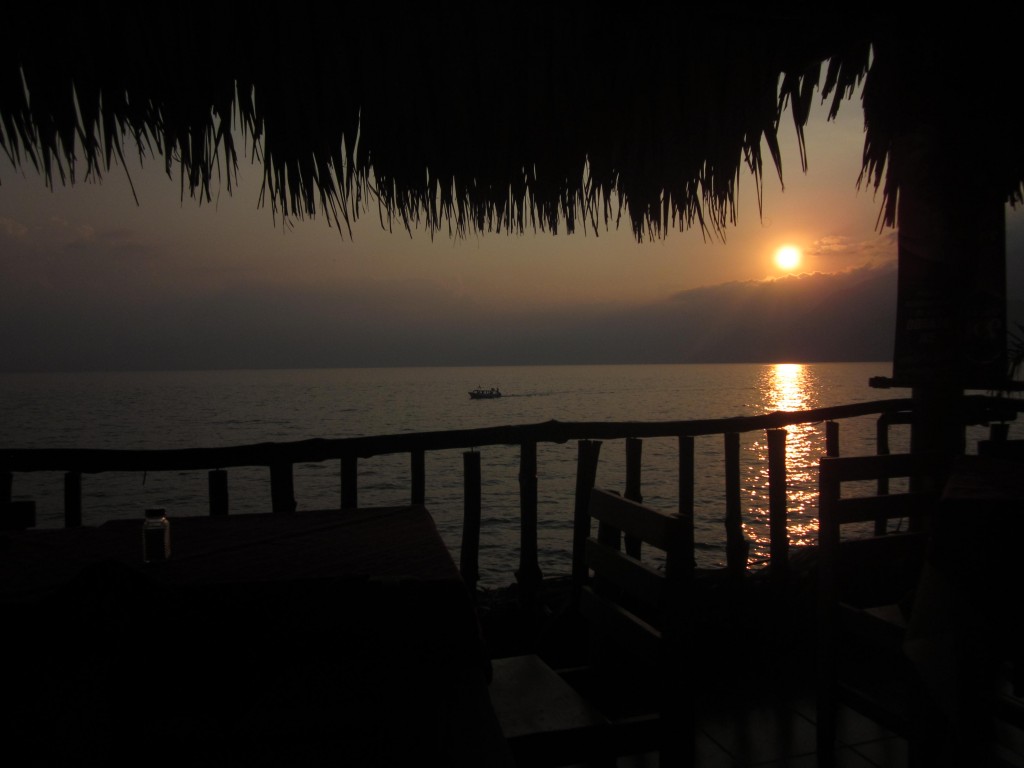 of course, taking in the view meant a stop at one of the lakeside restaurants for a beer while we discussed which boat touring company we wanted to take in the morning. this was our view that evening.

we woke up early the next morning to catch our 8:30am boat, and were promptly greeted by one of the men we had met the night before, trying to get us to choose his company. he remembered us and herded us down toward the water. his actually ended up being one of the better options, so we allowed ourselves to be herded. little did we know, there would be much more herding to come in our day around the lake. 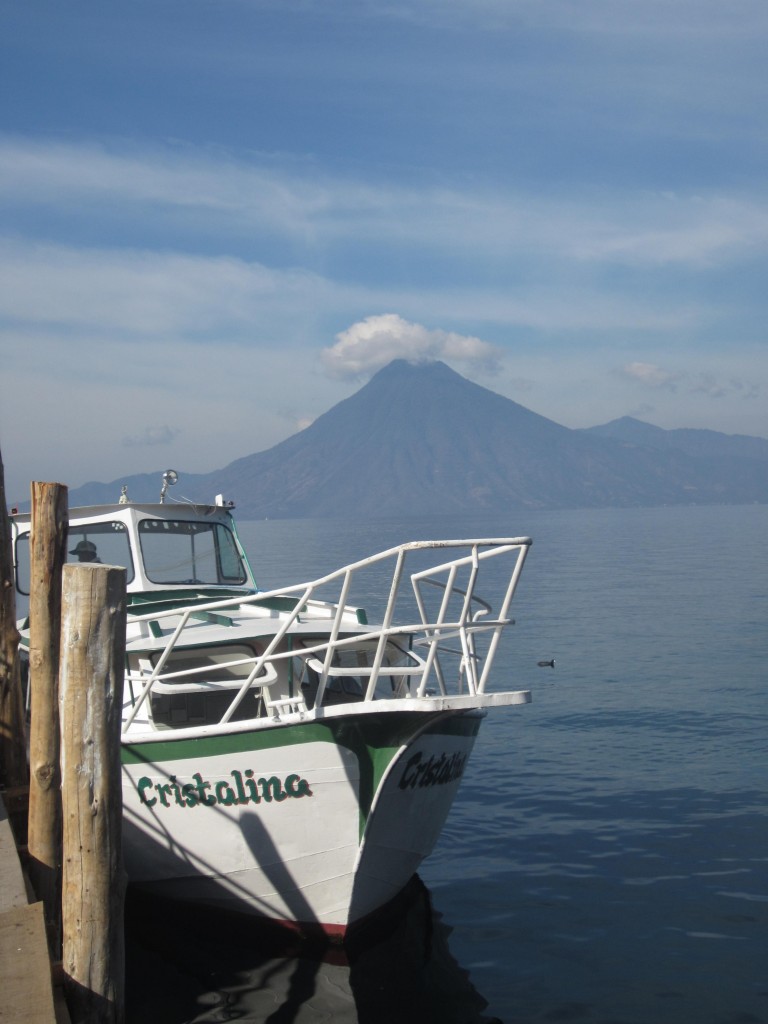 this didn’t end up being our boat taxi (because of which, i won a quetzal apiece from bob and matt because i picked the smaller, dingier boat and was correct!) but, it was the best view of the other side of the lake that we had all day.

so, the tour took us to four of the smaller pueblos around the lake, each known for something different. the first was a mecca for hippies and healers, called san marcos. you could get massages, reiki, do yoga, meditation, etc. it was the most simple and least modern with tiny alleyways leading through the village and most people were in local, indigenous dress. we had just enough time to head up into the center to a quaint little coffee shop and book exchange and grab some breakfast.

then it was back on the boat for our next stop. this one wasn’t far away, and was an unexpected stop. but, as soon as we got off the boat all three of us were hounded by three separate tuk-tuk (local, hilarious looking three wheeled taxi) drivers. they wanted to show us the sights of the village in the hour that we had there. it was tempting, seeing as how the road into town was straight up. but, we tried to head out on our own and started up the hill. one of the younger drivers was bound and determined, though. and, he jumped in his tuk-tuk to follow us. he told us we’d see way more of the town with him and said he’d take us to the local women’s cooperative where they died wool to weave the local textiles. i was pretty interested in seeing this, so we asked his price and decided it wasn’t a bad deal. and, i’m actually really glad we did. 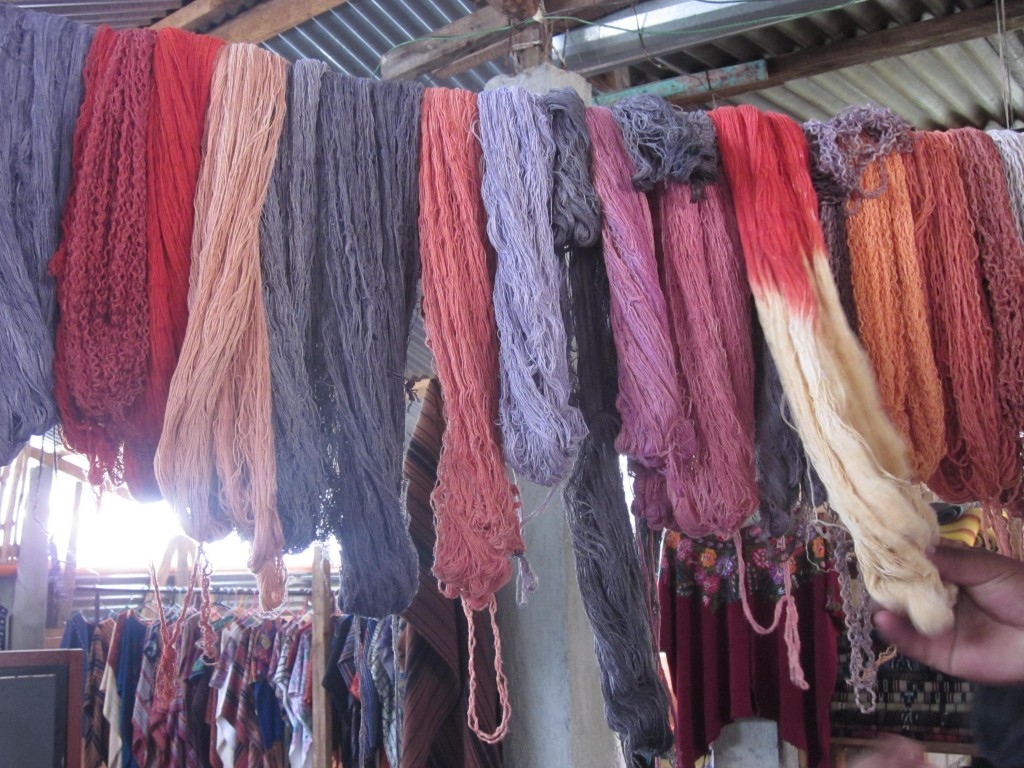 each ball of wool was dyed from natural colors: carrots, beets, a plant that when heated gives off a beautiful indigo color, etc. etc. it was really fun to see the process and talk to one of the ladies who works in the colective

the next stop was a much less inticing pueblo, san pedro. it was larger than the others but seemed to only have cement block hotels and restaurants. but, bob had done some research on a good lunch stop there and we had an hour to find it and eat. it turned out that it was on the opposite side of the town and we wouldn’t make it there in time to get back to the boat. so, we went in search of something else. we trudged up and down the steep hills looking for a spot and finally found a nice coffee shop with delicious looking food. so, we sat and ordered with about 40 minutes left before our boat took off… 35 minutes later, our food still wasn’t ready and I decided to run down to the dock and ask for 15 more minutes from our driver. he was docked a few boats over from the spot I could get to, so I ended up having to yell a broken spanish conversation with him where I asked for more time, he refused, I told him our situation and he just kept responding that he would wait 5 minutes and no more. so, I ran back up to the café, and we got our food packed to go (it still hadn’t come out of the kitchen). but, they got it packed up super quick and we barely made our boat. i know, this is not a true crisis situation (so you can start laughing at us now). but, we were starting to tire of being herded around all day and not really having a sufficient amount of time in any of the pueblos. had we thought about this ahead and stayed a few extra days we could have chosen a different route. but, for before or worse, we were on the boat tour getting a lightening speed tour of four unique towns around the lake. because of this fact, we found ourselves eating burritos, empanadas, and salad with our fingers on the trip to the final town. the food was, in fact, fantastic! but, by the time we arrived at the final town and immediately got swarmed by teenage boys who wanted us to pay them to take us to see maximon, a local deity who was believed to be a protector of the people, we were done. most people actually do the boat trip just to get this chance. it had seemed pretty cool when we read about it ahead of time. but, after our morning of hopping from town to town and getting hassled left and right, all we wanted was a quiet place to have a beer and look at the lake. so, we fought off the local boys (seriously, we had to get a little rude for them to leave us alone) and wandered around until we found a quiet spot on the water. we slowly drank our beers and waited for our ride back to the town we were staying. overall, it was a pretty good flash-introduction to the towns around the lake. but, if we ever went back, i think we’d stick to one or two of them and spend some quality time there. my vote would be for the first one, san marcos, for a massage, some healing and maybe an occasional dip in the lake. but, you live you learn…. 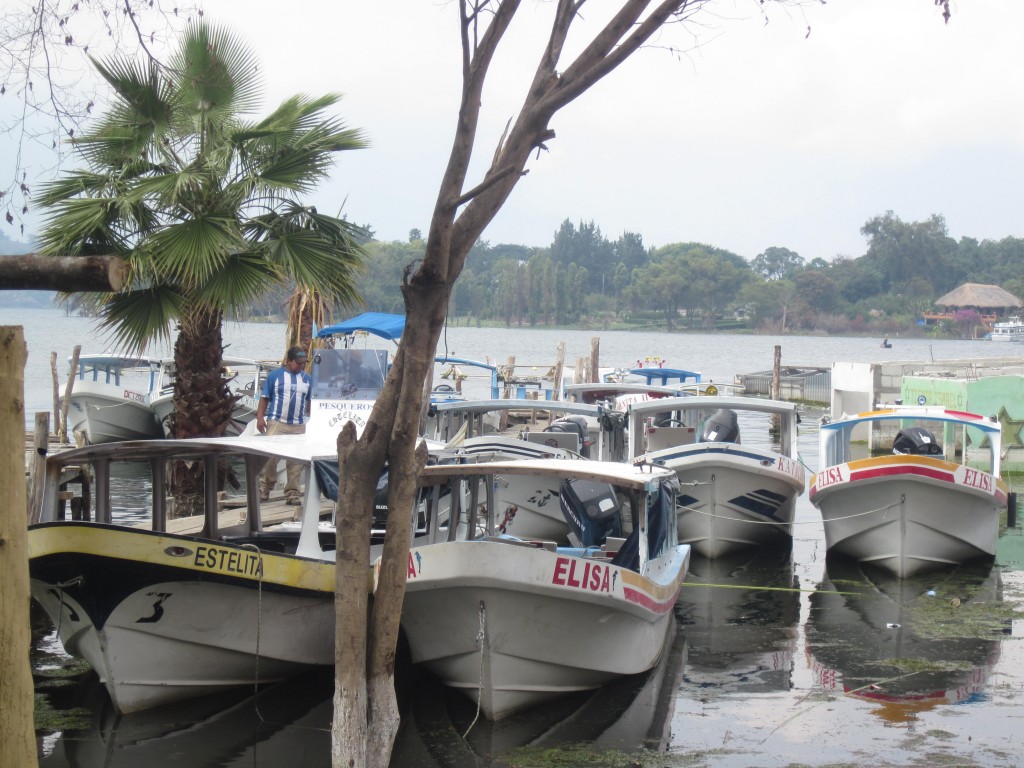