after leaving lake atitlan, we decided that we needed to hightail it to the guatemala/honduras border so that we could be on track to cross into honduras the next day. it was only 200 some miles, but it ended up taking around 10 and a half hours and was quite the adventure. in the morning, coming out of the highlands, we drove first through whispy, white clouds sweeping across the road (which was fun and pretty) then they turned to a cold misty rain and near zero visibility. that part wasn’t nearly as fun or pretty. so, after we got through a good long stretch which included some muddy road construction, we jumped off the road to get gas and grab a cup of coffee to warm up. we all geared back up for the misty cold and headed on down the road. and of course, two minutes later we were driving through sunny clear skies again. but, we were still glad we had a little break. the rest of the day proved to be just as adventurous. we got lost in guatemala city, where NOTHING is labeled, turned around twice and ended up driving through it for around an hour and a half. drove through a ton of dusty construction sights after that and then made one last, late afternoon stop for gas to make sure our destination city wasn’t too far away to reach by dark. we found out that it was only 30 minutes away and were all pretty relieved, as the sun was definitely starting to set.

back on the bikes, we headed toward chiquimula, and not 5 minutes from the gas station we hit stand still traffic. our past experience with this kind of pile-up meant one of two things: construction or a wreck. but, it also meant that motorcycles are supposed to weave their way to the front to investigate whether they can make it through. so, we made our way up and found total chaos near the front of the line. it was, in fact, construction, but the hold-up was caused by a bunch of impatient drivers who decided that the one lane at a time system wasn’t for them and tried to get their huge buses, trucks, cars up to the front in the lane where the other side was attempting to get through. so, there was a lot of yelling at people to back out, there were huge semis having to squeeze on the side of the road and snapping trees as they went. but, once again we got to watch all the action with tons of local people who had no other option than to get out of their cars and be entertained by the scene that was unfolding. 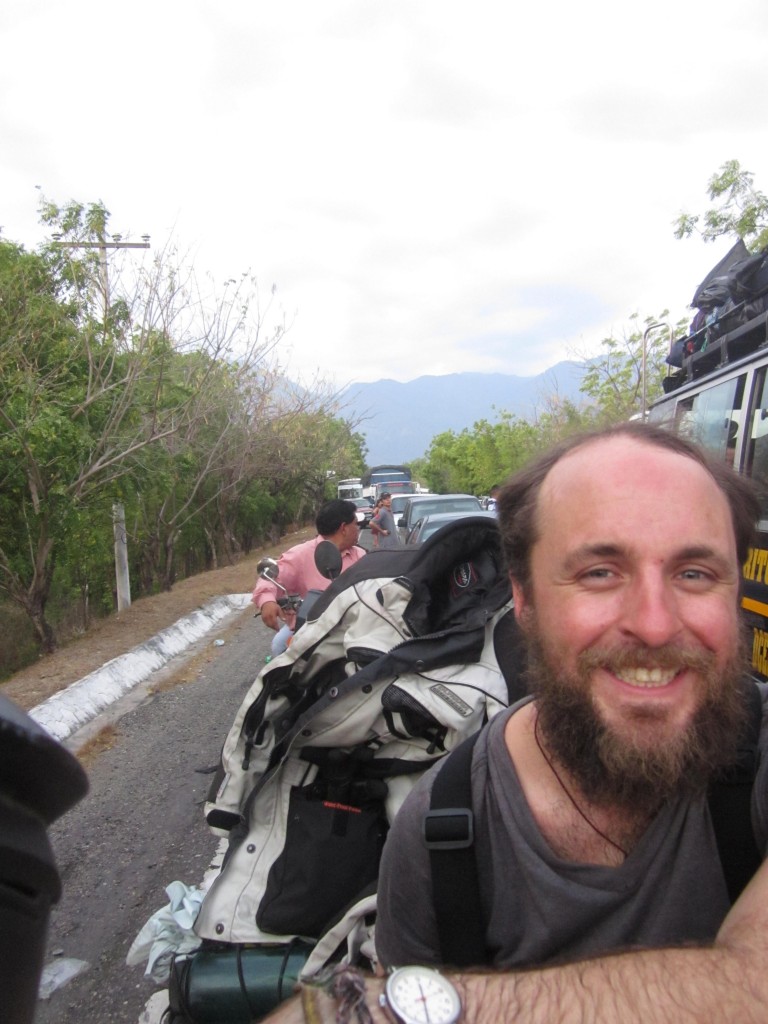 when we finally got through, we were in a gang of motorcycles for a bit. all of us had gotten stuck at the same point. so, that was kind of fun. but, it was definitely getting dark and we tried to make fast time to our destination. once we reached the center of town we actually found our hotel pretty quickly, which was a relief after the day we had. and, we unpacked just what we needed for the night and immediately proceeded to the small pool in the back and took a dip. It was cold and refreshing which was pretty therapeutic for all three of us, as the second half of the day was in the scorching hot lowlands in the center of the country.

so, after we cooled off we went in search of dinner and couldn’t find much other than the long line of food carts in the plaza. not willing to tempt fate with street food the night before a border crossing, added to the fact that we were all famished, we settled for the guatemalan equivalent of KFC… pollo campero! it was bright, air conditioned, and the fried chicken was just what i needed at the moment. we headed to bed soon after that, anticipating another adventure-filled day with the honduran border looming in our immediate future. little did we know, it would be the easiest one yet, and we’d fly through the process in less than 2 hours. but, that’s the thing about a trip like this, you never know what to expect. you just have to be willing to deal with whatever comes at you in the present moment and not think too hard about the next one, or the one after that.

well, goodbye guatemala. this was the first ‘new’ country for me on the trip, so far. and, i was pretty impressed with the beauty of it’s countrysides and of its people. most of guatemala seems to be a world away from the way we live back home. and, it was a great transition into the dynamic cultures we have been experiencing in central america. i am beginning to feel that the us and mexico (they are actually pretty similar in the grand scheme of cultural understanding) are very far behind me. and in that line of thinking…

« lago atitlan
the most dangerous country in the world »