i’m not going to lie. we weren’t super enthusiastic about driving through honduras. it doesn’t make it into the us news too often. but, lately when it has, it hasn’t been pretty. they seem to be having a pretty shaky time politically right now, and the last thing we wanted to do was get caught up in their internal struggles. but, there was no escaping it. we had to go through honduras to get to nicargua. so, we headed out early for the small border town of mesilla in guatemala. when we got there, it was a pleasantly tranquil sight. there were a few semis lining the sides of the road, but not many. we headed straight up to the hydraulic gate and were motioned through to park straight in front of the migration office. so, all three of us were able to get stamped out while watching the bikes. i got to sit in the shade for the second part, where the boys had to export the bikes. but, it didn’t take any time and we were off to the honduran side just 50 yards away. same deal, good shade, easy time. i made a friend while waiting this time. a young honduran man who was super friendly and just interested in chatting with a foreigner. i gave him some candy and we talked about speaking spanish, honduran economics, and other random things. just before we headed out for copan (which was only 15 minutes away) a nice belgian guy hopped off a camioneta (small tour van) and chatted us up for a minute. it turned out he owned a hostal/restaurant/bar in copan and was headed to guatemala city to pick up his new bike. so, he was excited to see some fellow riders. he said that once we got into town we should head to his place and tell them our first beer was on him. (and what do you think we did with that information!?)

so, we sailed through the first honduran border and headed the few miles up the road into copan. it’s a tiny town with steep cobblestone hills and not too much fluff. there are a hand full of hostels and hotels sprinkled through the city. but, it felt like a great size and we didn’t see too many travelers (non-hondurans) which was a welcome sight for a ‘destination’ city. we got settled at our small hotel and headed to the belgian hostel to have some lunch and try to get our free beer. 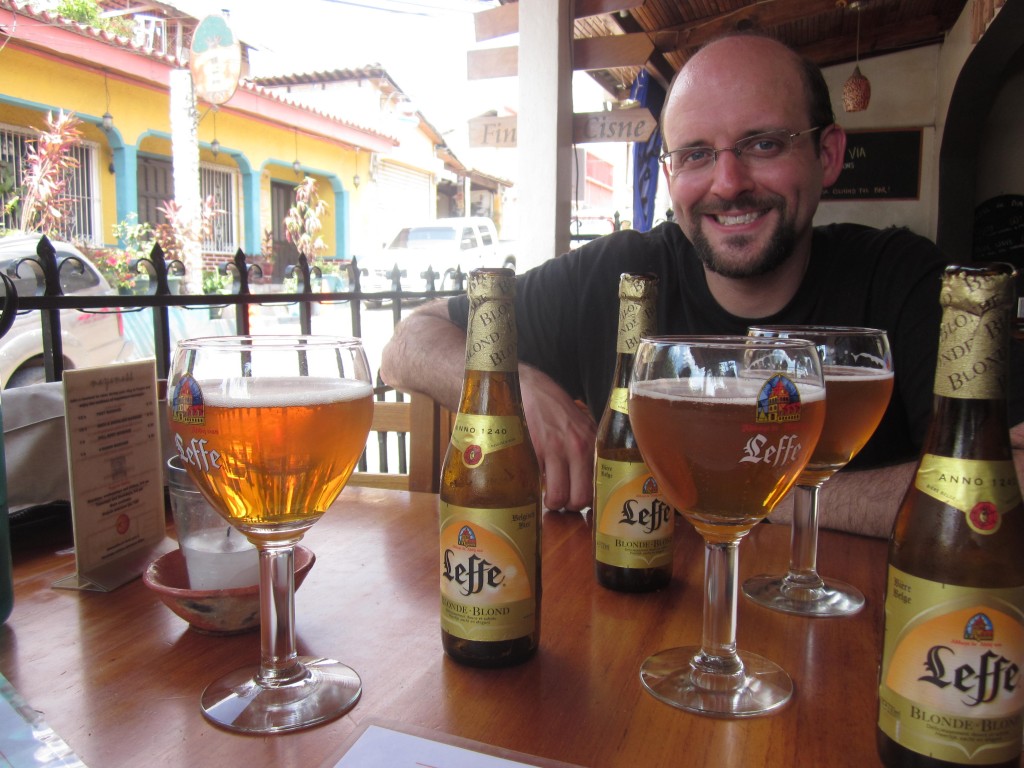 here’s pete posing with our gift! we were pretty excited that the free beer option they gave us was leffe. we hadn’t had anything close to a belgian beer in months. so, after one free round we decided it was only right to pay for a second one. (oh, and their food was delicious too)

so after an afternoon of relaxing to get over a long day of travel we made plans to visit the copan ruins the next morning. we were only a 10 minute walk away (that’s how small the town is) and found a family of americans who were looking to get an english speaking guide. so, we shared the cost with them and headed out to see on of the greatest civilizations in the mayan world. 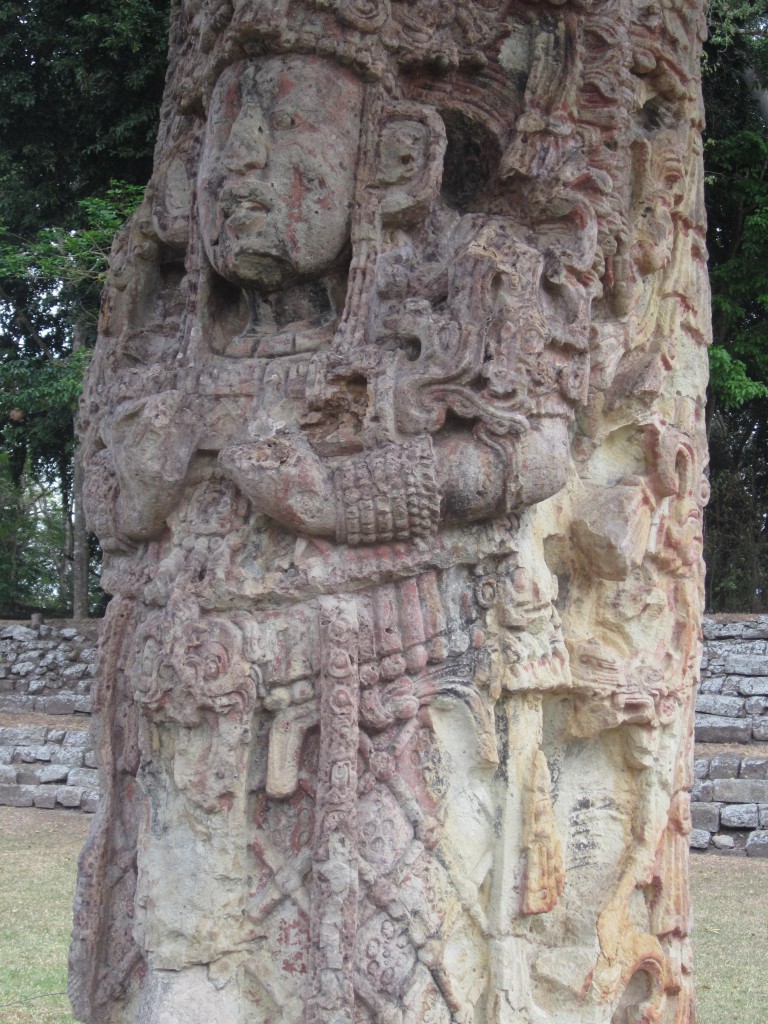 this particular mayan civilization was known for all the amazing sculptures that were commissioned by it’s kings. i could fill the entire post with pictures i took, but i’ll spare you, and just show some of the highlights. 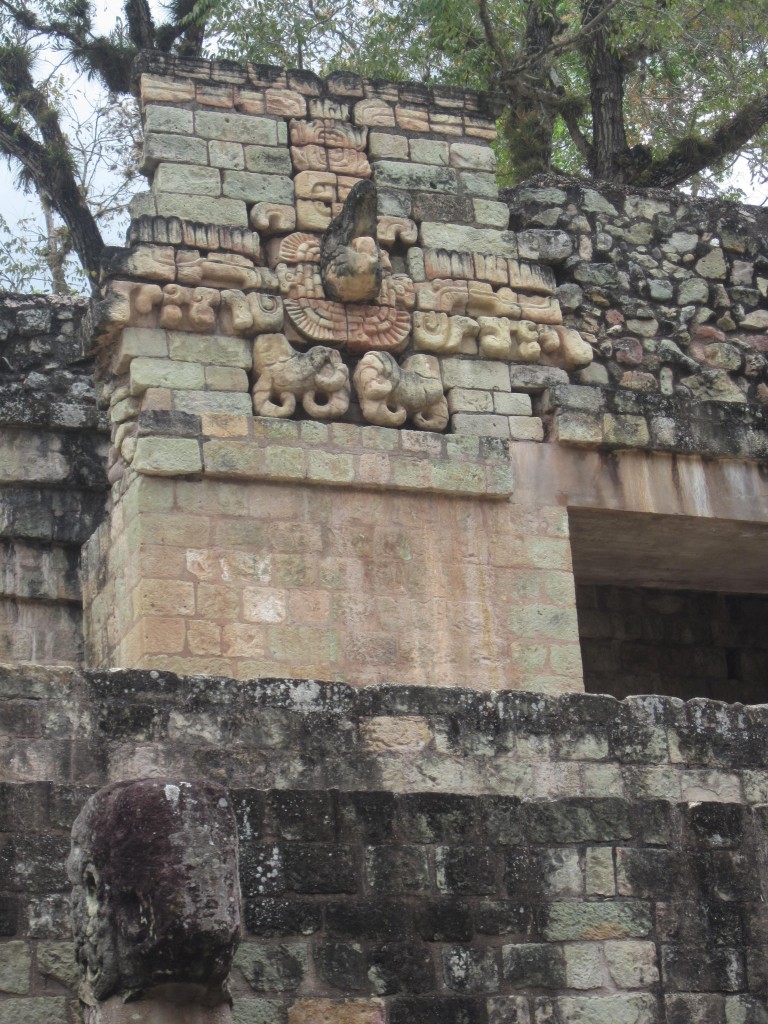 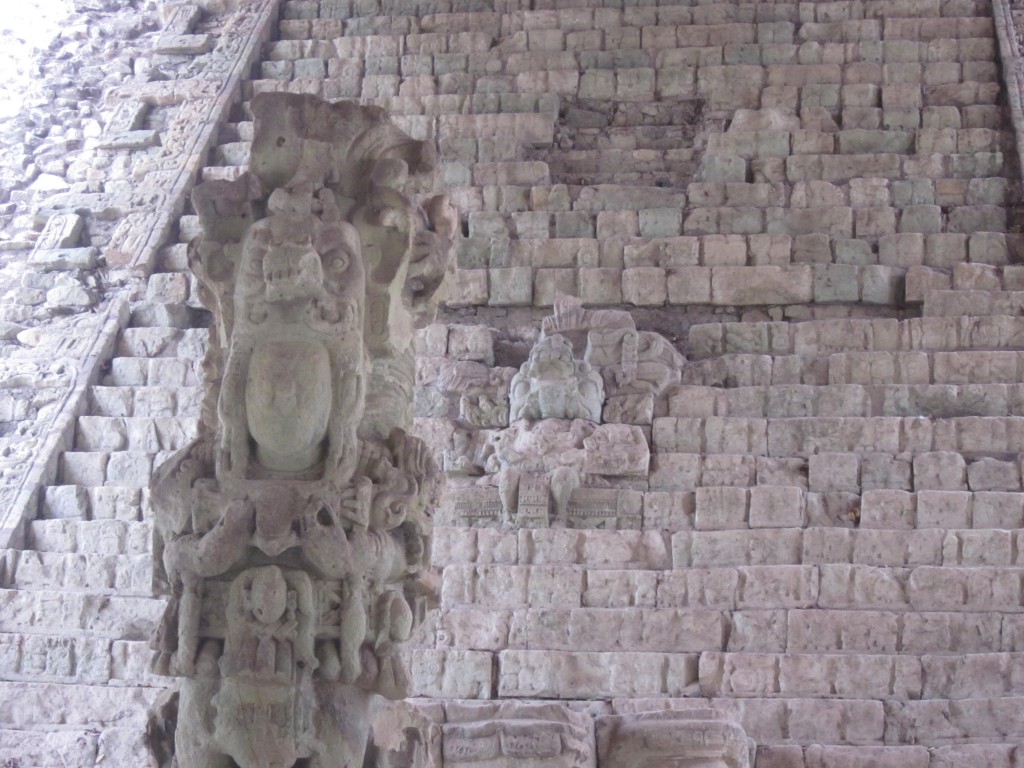 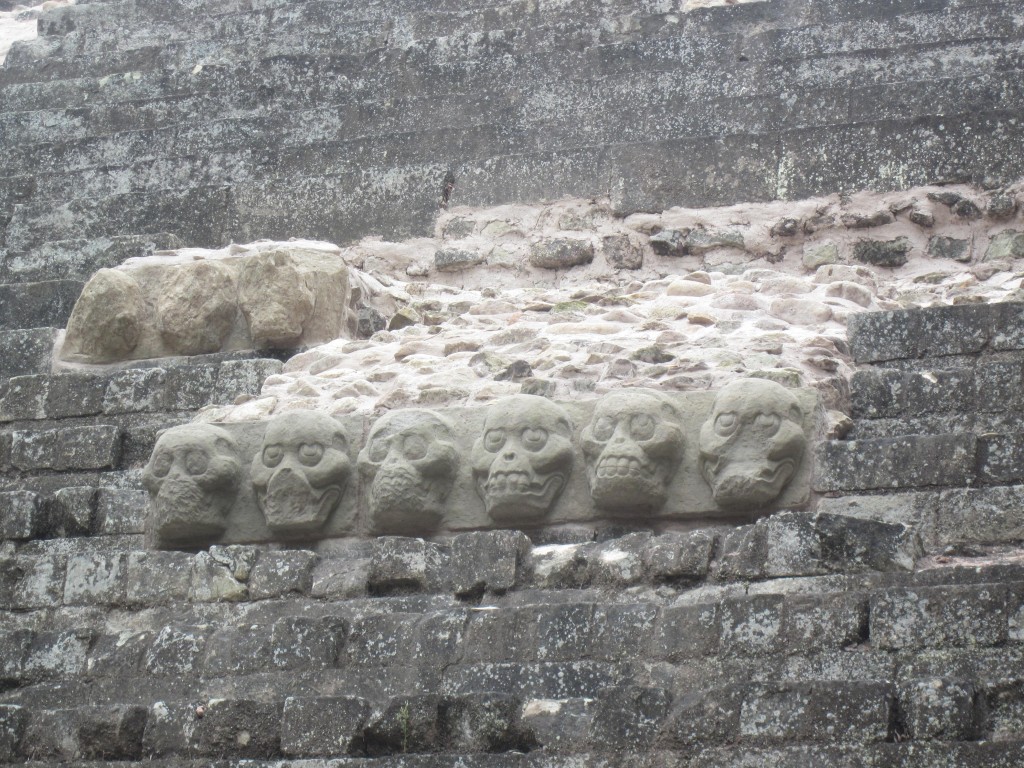 we had a great time learned about the rise and fall of the copan mayans. they had a good run of a few hundred years where they were considered the paris of the mayan world. the grounds were expansive and there were multiple large platforms to walk around. we also got to go down into tunnels that archeologists had dug to view the internal carvings and structures built inside of the larger external ones. a fun fact from copan is that they found a female body in one of the tombs many years ago. so, archeologists think she may have been a revered woman in the society, maybe a healer of some sort.

so, we thoroughly enjoyed the ruins, but our day was not over. bob and i had planned a date (yes, it’s a big deal on a trip like this to have a date night) to a spot that a friend of ours had recommended. it’s a hacienda outside of the city, and it’s up on a large hill overlooking the valley and the ruins. we walked there because we decided to go in the afternoon to catch the sunset. it was a long walk, but we got to see a little more local flavor on our way: men headed home from the fields with their machetes and rubber boots, kids swimming in the large river that ran through the valley, etc.

once we got there, we immediately realized how special this place was. it had a feel of total relaxation. the owner, named flavia, is pretty well known for her hacienda and her advocacy work in local politics. her hotel was a little too pricey for us, but we were convinced by bob’s co-worker, luckett, that we at least had to go for dinner (thank you so much luckett! it was an experience we’ll never forget) they don’t use much light after the sun goes down, so all the tables are set with candle light on the large verdana off the back of the main building. they don’t have a menu, but serve you a 5 course dinner that they call ‘mayan reclamation’ food. it was too delicious to describe. so, i’ll try to do it justice in pictures… 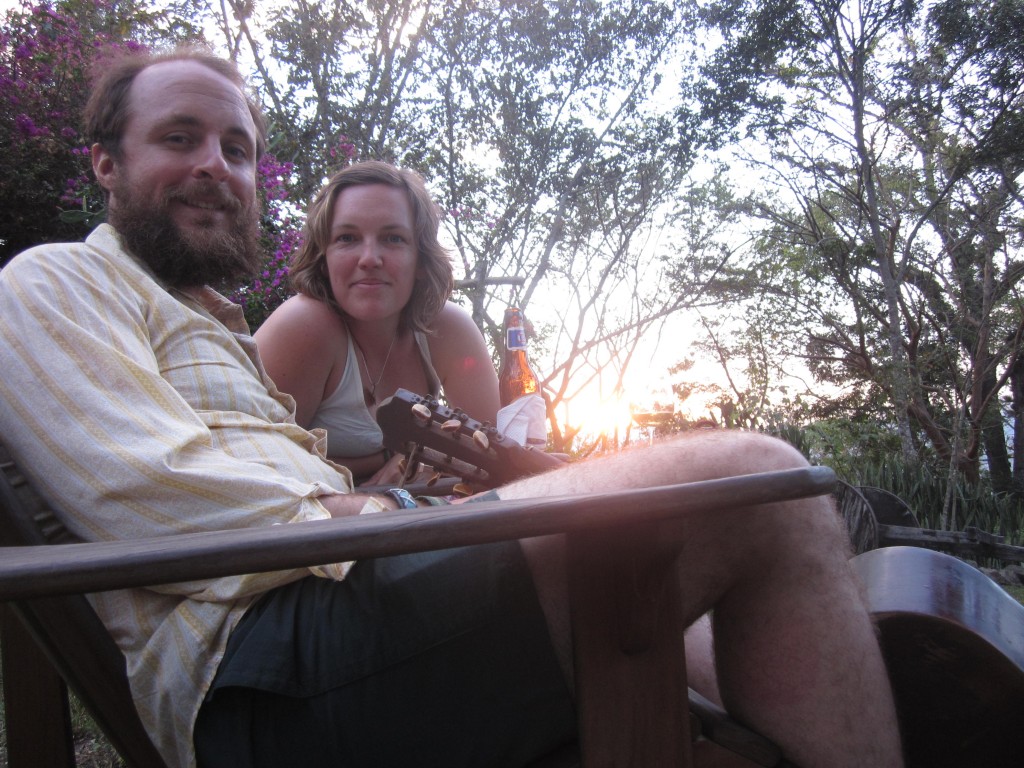 here we are having a pre-dinner drink and lounging in the yard. this was the most relaxed i had felt on the whole trip, so far. and after some hard days of travel, it felt so luxurious. 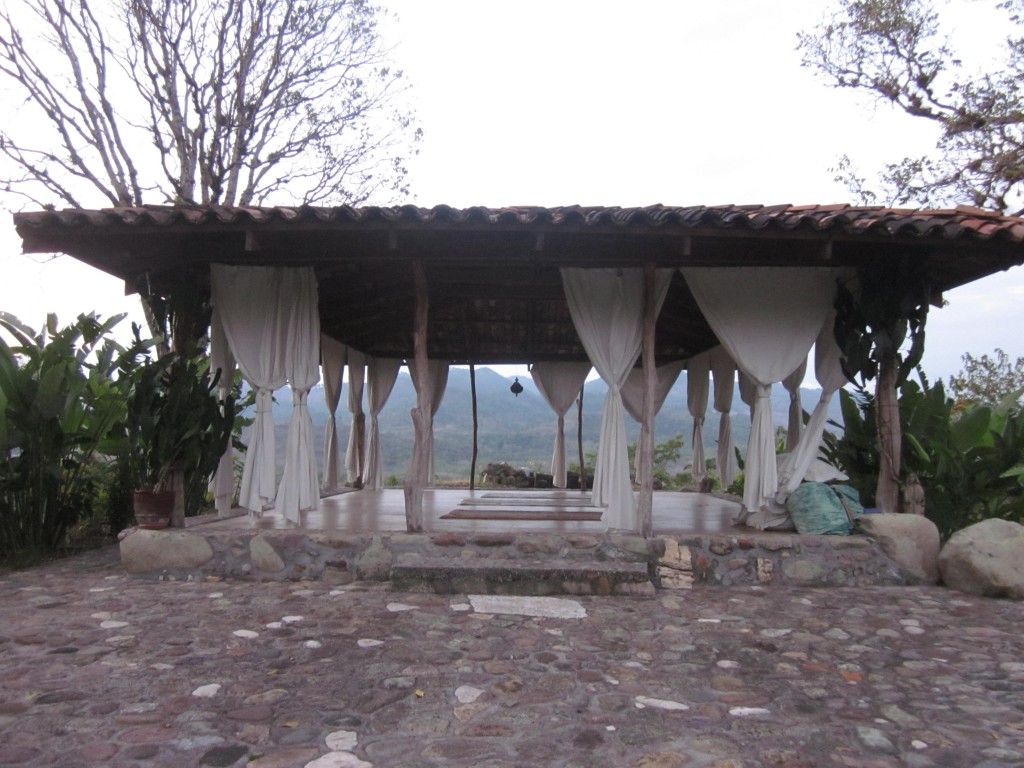 the yoga/meditation pavilion that overlooked the valley 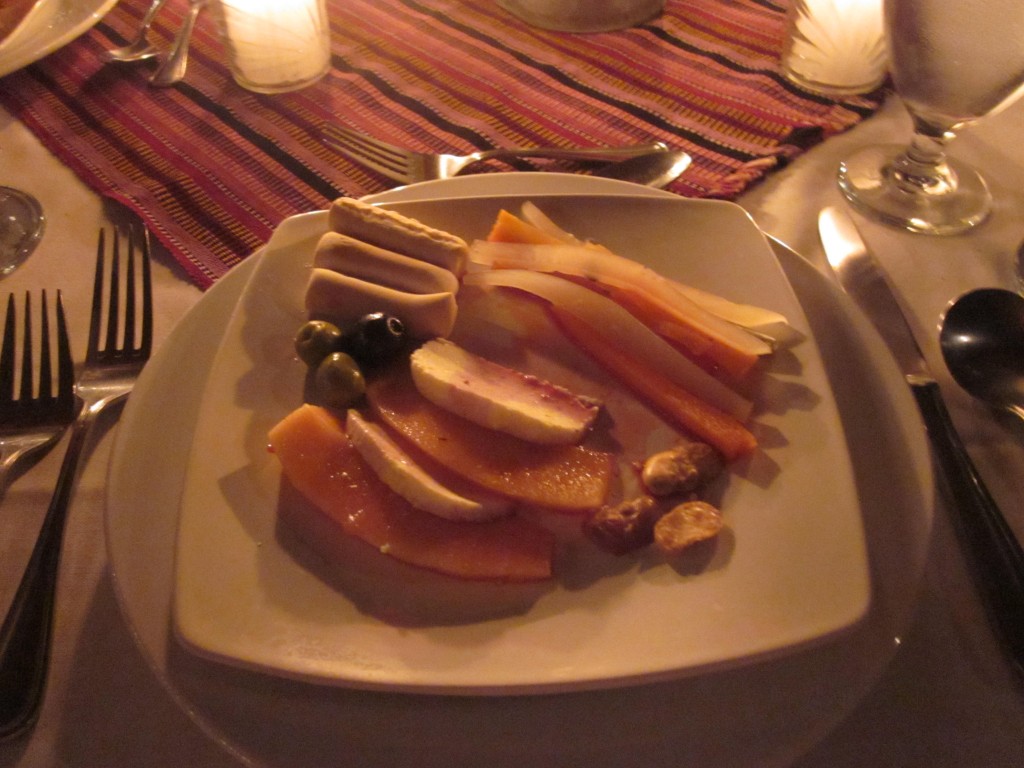 the first of five amazing courses: pickled vegetables, fruit and homemade cheese, olives, and nuts (my favorite course of the whole meal!) 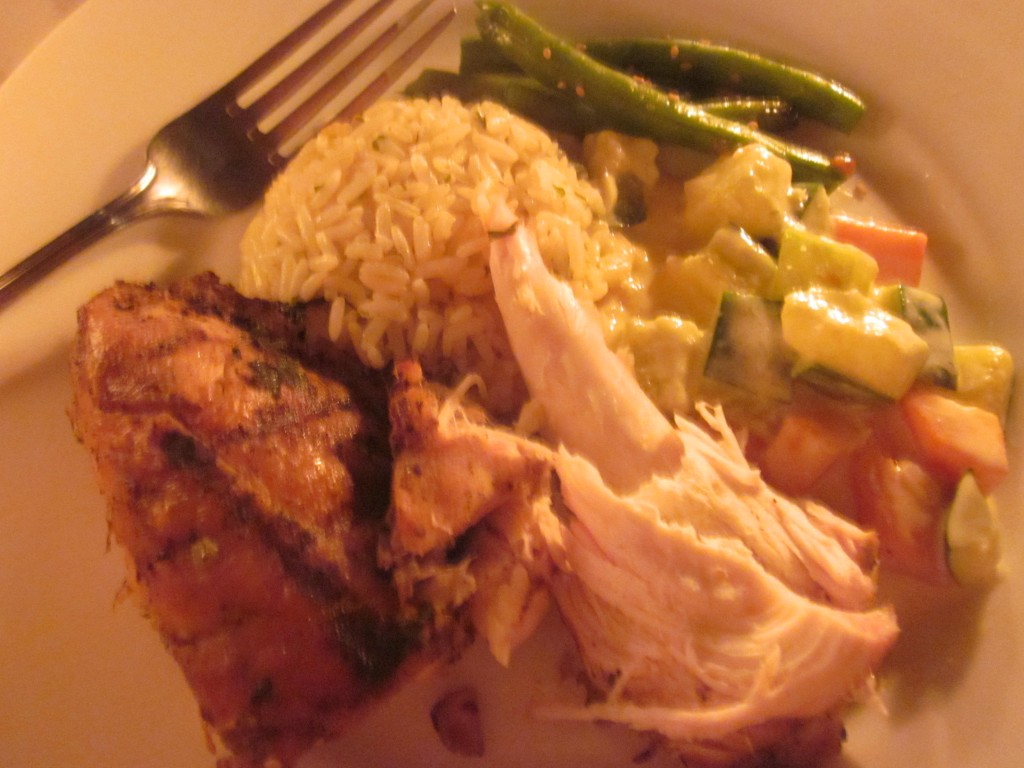 main course: chicken posado, beans and rice, and vegetables in cream sauce. the best part of this course were the sauces that you could add. there was a mole-esque sauce (minus the chocolate) that went on the chicken. i think we finished the entire bowl, it was so good. and there was a salsa for the rice and beans.

there was also a creamy corn soup, a chicken tamale course, and a dessert of rum cake, honey and papaya with raisins. we were so stuffed by the end that we felt drunk from the food! 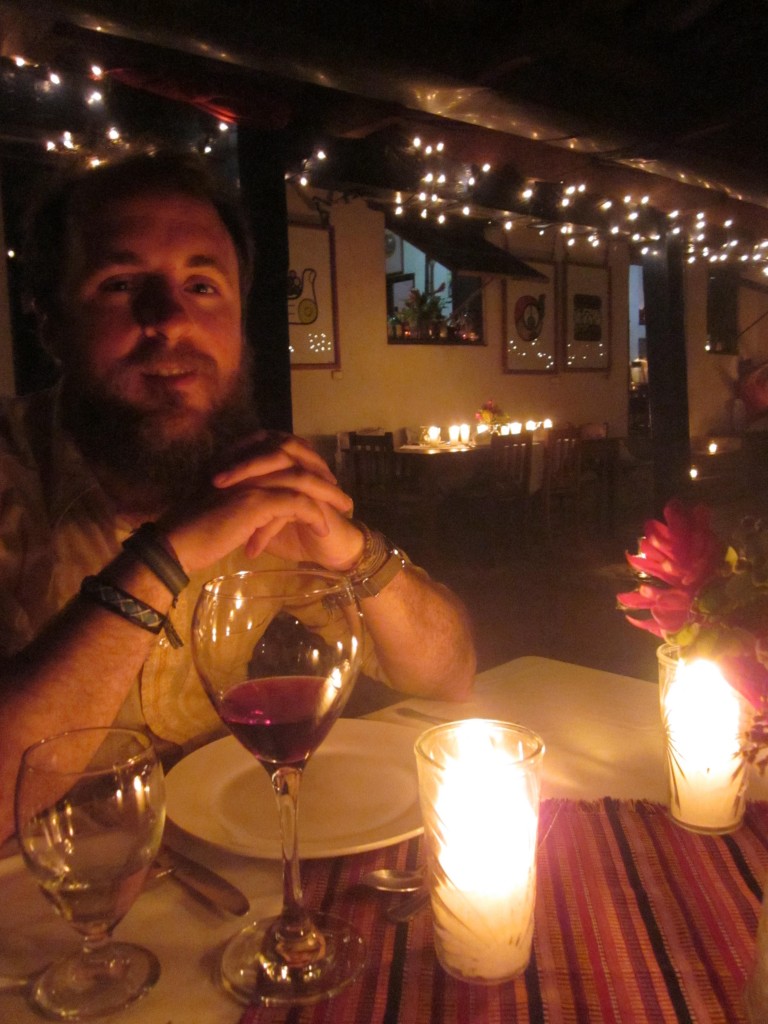 a small taste of the ambiance at dinner, needless to say, it was a pretty great date

to top the evening off right, we took a tuk-tuk (those crazy little three wheel taxis) back down into town. our driver was the brother of one of the workers at the hacienda and was super friendly. but, he was a manic behind the wheel. we zoomed down the rocky dirt roads at a speed that didn’t seem too safe. but, i decided he knew what he was doing well, and just held on tight and enjoyed the ride.

after quite a bit of anxiety about traveling through honduras, i have to say, our introduction to the country was pretty opposite my expectations. the size of copan was really appealing and the fact that we weren’t surrounded by backpackers and tourists was also pretty sweet. it didn’t hurt that we had a tour of some beautiful mayan ruins and a 5 course meal all in the same day. so, maybe copan spoiled me a little bit. but, there have been plenty of aspects of this trip that have taught me how to live with less. so, i’ll take the posh time we had in copan as a gift and a way to rejuvenate for the long, long road ahead. 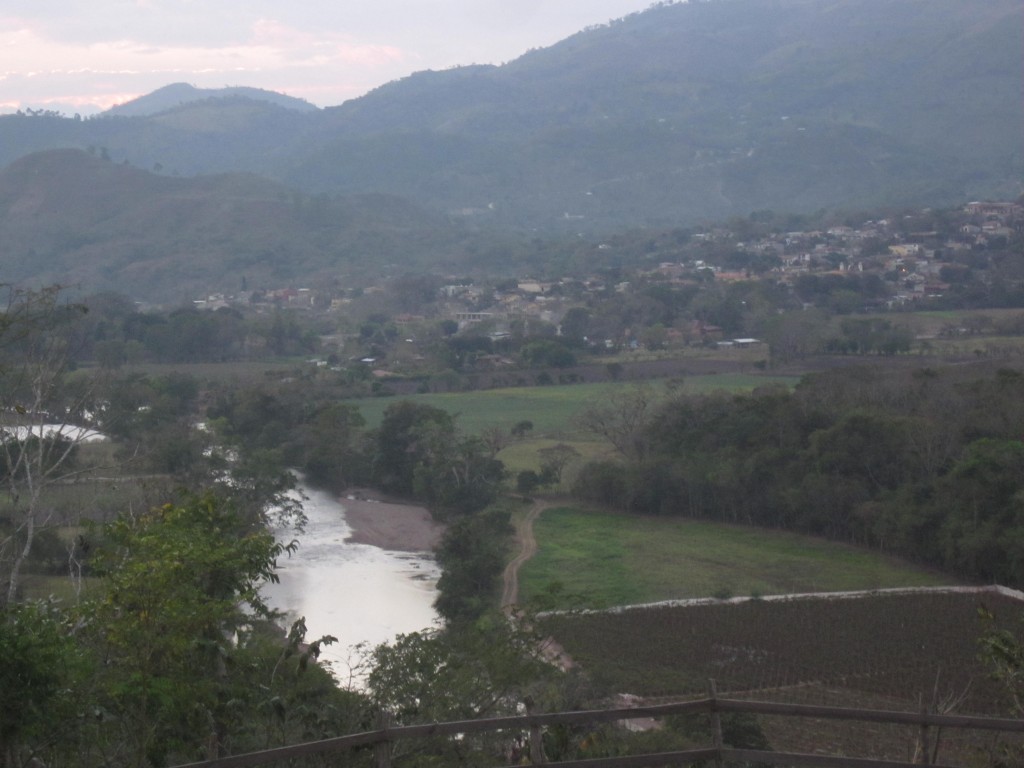 one more view from hacienda san lucas down into the valley and the small city of copan. if you ever get the chance, go there. if you have the money to splurge, stay at the hacienda (or at least eat dinner there) and enjoy the magic of the space.

and, one more huge thank you to luckett. you have amazing taste!