we got the privilege of heading up to mefalia’s school the next morning on our way out of town. her class seemed like your typical group of six and seven year olds. they were studying their alphabet when we arrived, and many giggled and got shy once we came into the classroom. we said hello and introduced ourselves and mefalia had them sing a song for us. some got through the whole thing, others trailed off in embarrassment or because they forgot a verse. it was a pretty great thing to witness. so, we said our goodbyes to mefalia. but, it seemed strange to so quickly be leaving a family that we bonded with in less than 24 hours. i guess they were more used to it than us, but they all asked us to come back and we really felt like they meant it.

we headed out for our final destination with their son wilder that morning, and expected (or at least, i did) that it might be a quiet one. he was a pretty reserved and shy 18 year old, typically self-conscious. but, i guess we had spent enough time together over the last day that he really started to open up and became our favorite guide. he was very unassuming, hadn’t lived through the war but had definitely seen the effects of it, and was a curious eighteen year old having hours to kill with two wiling americans. so, we took turns asking pointed and sometimes random questions. we talked about technology in the US, medicine, more of his family history, what he wanted to do in the next few years, how to say hi the nicaraguan way. he was patient with us and our spanish and i think he was the best guide for helping us practice. he and bob launched into a long conversation about our current president and the state of US politics, which wilder wanted to know about, and i was so proud of bob’s speaking ability. i think it just took the right subject and the right listener for him to go to town in his newly learned language.

we walked with wilder for a good four hours, and by the time we got to our final destination we were beat. it was my favorite walk of the entire trip, though, because we went through a ton of farms and passed by lots of houses and men out working. i felt like we saw more of the daily functioning of miraflor that day. it was always an awkward arrival at each new family’s home, and this one was no different. they introduced themselves and sat us at a table on the porch for lunch. wilder turned back into his awkward teenage self (maybe because this family had four pretty and boisterous daughters). but, the mother, martha, made him stay for a plate of food with us before he took off on his four hour trip home. so, we had one last meal with wilder and then wished him well. and, we found ourselves unoccupied and tired once again. so, we quickly found the backyard hammocks and took a liking to the red, white, and blue arkansas model. a little random for miraflor, nicaragua. 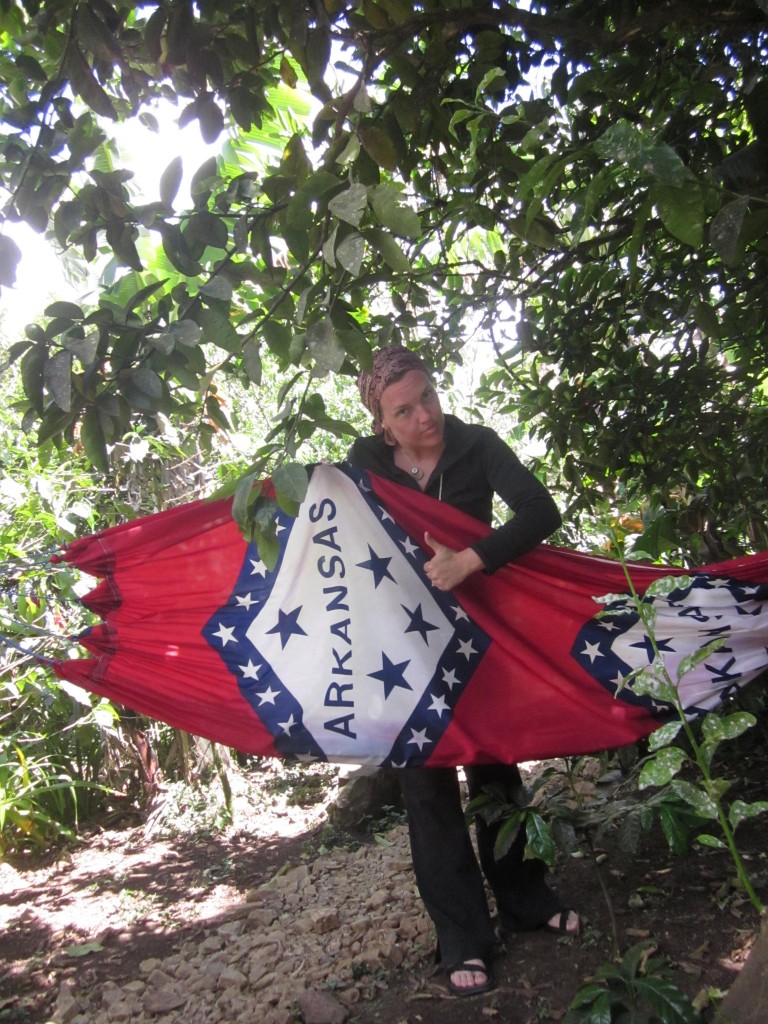 this one’s for you dad! ha.

we met a group of norwegian travelers who were staying there the night before. and they had just come from a hike to the local cascades. so, they gave us directions and we decided that was the perfect end to a long three days of hiking. we headed down to the cascades (it was a LONG way down a very long dirt road) and tried not to think about our walk back up. but, the water was cold and refreshing and we stayed to dry off once in the sun and jump back in for a second go at the sensation of freezing cold water. 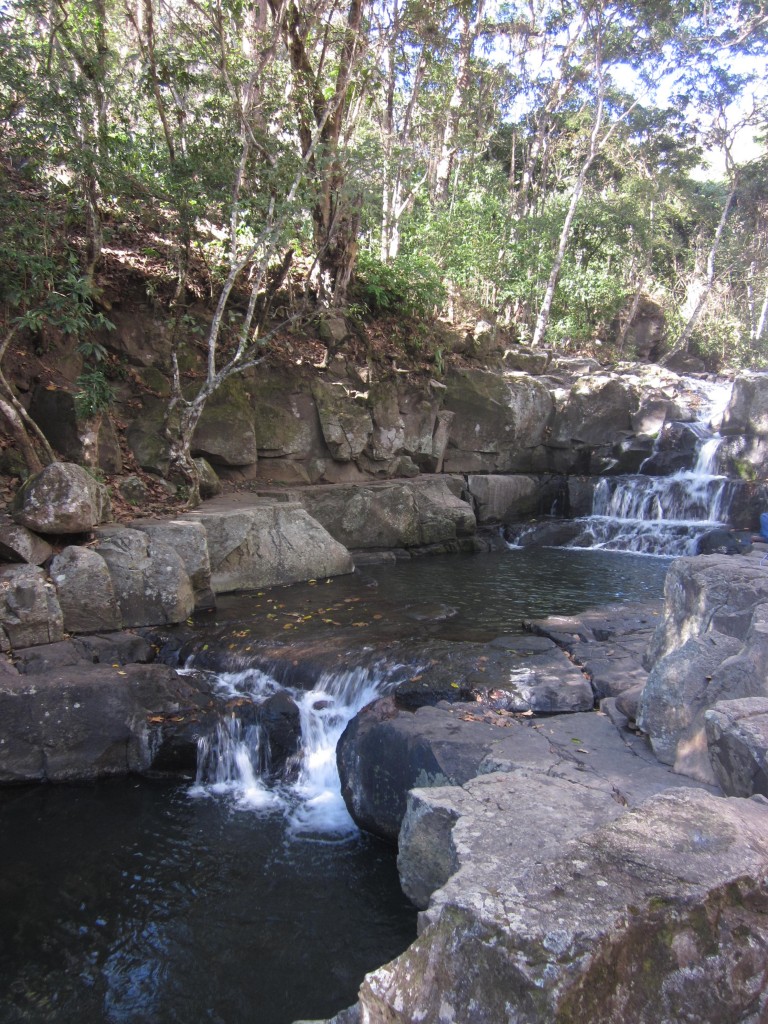 our second swimming hole. this one was super deep, so you could dive straight in, and they were freezing cold! 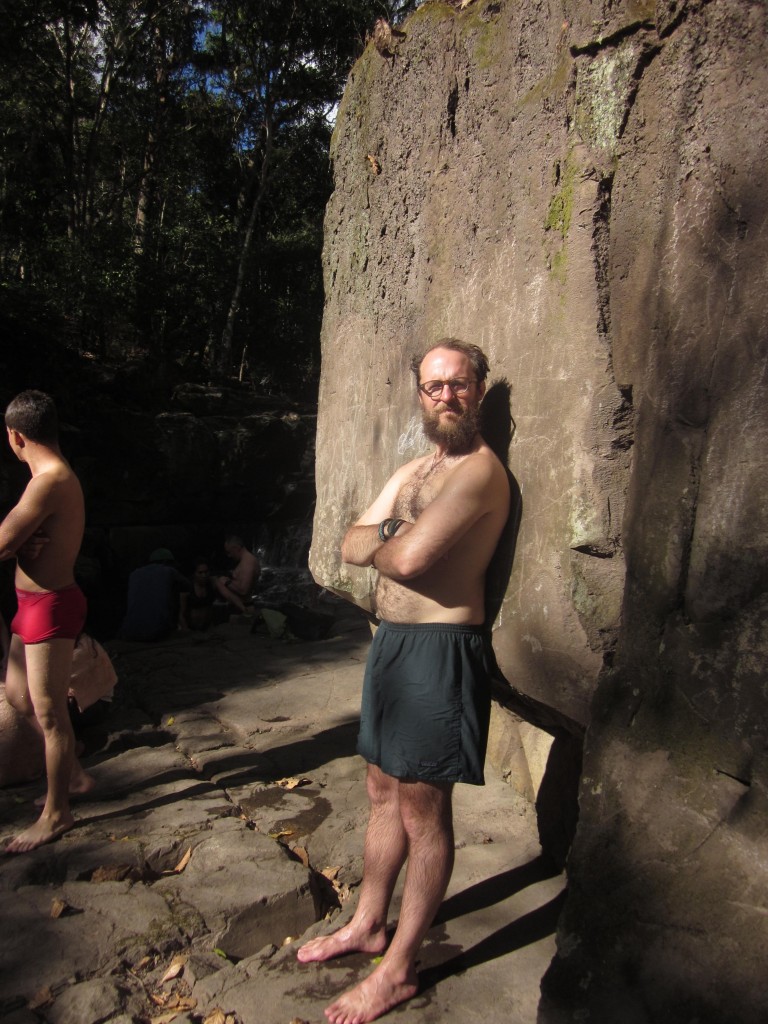 bob, sunning himself before our second swim

we were pretty worn out by the time we got back to the house and got the impression that they kept themselves kind of separate from their guests. but, as soon as we sat down on the porch, martha, came out and invited us up to her outdoor-ish kitchen, where apparently everyone in the family hung out. so, we pulled up a chair and got to know her daughters and their daughters and sons (one was three months old). they were pretty talkative, especially the oldest. and we got to sit and watch them cook dinner which was a chicken from their yard that they would dip into the open flame (with everything intact except its head, of course). they served us strong, black, sugary coffee (i’m going to say the best i’ve had yet on this trip) straight from their yard. and we talked about their family and their knowledge of natural medicine. they are known around their community for helping folks with illnesses of all kinds and grow a lot of the things they use in their gardens. martha and her husband luis were also sandinista and were good friends of marvin and mefalia. luis used to be the president of one of the cooperatives back when things weren’t going as well for the area. while we ate dinner, luis sat and talked to us extensively about their way of life, the state of nicaragua, politics, economics, the standard of living in the US versus nicaragua. we could have gone on for hours and hours. but, the thing that luis kept coming back to was that a simpler way of life was key. he talked about how important the type of foods you consume are to your health, which we all know so well, but which our culture tells us not to worry about on a daily basis. we also talked about goals and what it takes to get things that you want. we shared our experience of preparing and saving for this trip and he talked about the family working hard for things that are ‘luxuries’ in miraflor: a phone, a motorcycle, etc. we felt like we connected to so many of his thoughts and ideals on life. and, it was another wonderful experience in practicing our spanish by trying to have a deep conversation about subjects that really interest us.

the next morning we got up and headed back to the kitchen for some more strong coffee and a delicious breakfast cooked by the oldest daughter. then we sat and cleaned a large bowl of dried red beans of extra farm debris (pebbles, straw, bad beans) while the family chatted with us for our last few hours and kept pouring us more coffee. we were having such a good time talking with them that we didn’t want to leave. but, we had a bus to catch back to esteli, so we reluctantly said our goodbyes and thank yous, and packed up to leave miraflor. we had a 20 minute walk to the bus stop, but got there plenty early for the 11:30am bus. or so we thought…

we waited and waited and by 12pm, got a little nervous. so, i walked back up the road a few meters to a hotel/restaurant (which there are NONE of in miraflor, so it was kind of strange to see) to ask about the esteli bus. i asked if it came through this way, they said yes, right down the road and maybe it was just running late. so, i headed back down to where bob was waiting and he said he had heard the horn down the hill, so it should be any time now before it was picking us up. well, 10 more minutes passed and no bus. the owner of the hotel was heading out on his bike but, when he saw us at the bus stop, he turned around and came back to tell us that we had been waiting at the wrong stop. 5 more minutes down the hill was the bigger stop at the main road where the bus passed. it didn’t come up to this stop unless you pre-arranged it. we already knew that the next and final bus of the day wouldn’t be coming for four more hours. so, there wasn’t much to do other than take him up on his offer to head to his restaurant for some lunch and a beer. it was a strange way to end our experience in miraflor. after three days of crazy intense bonding with some wonderful families, we found ourselves being served a huge plate of food and sipping canned beer at the most touristy place in miraflor, and playing cards to pass the time until the next bus was scheduled. we were a little disappointed. not only in our ability to comprehend instructions to the bus stop after days of Spanish language practice, but also because we felt trapped at this strange restaurant having zero desire to be walking out in the sun for a fourth day in a row. but, what’s a profound experience in another country without at least one humbling moment where you totally screw up just when you think you are finally getting it down. so, when our bus finally came we were relieved that we caught it and happy to be headed to flushing toilets, showers, and back to life on the bike. 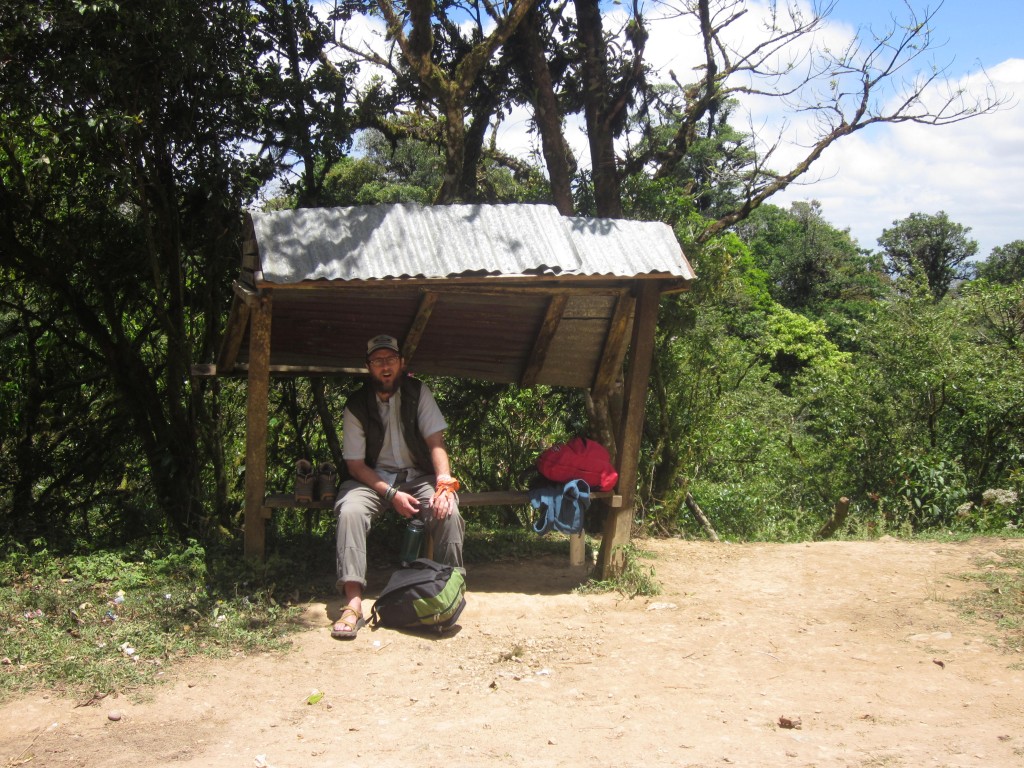 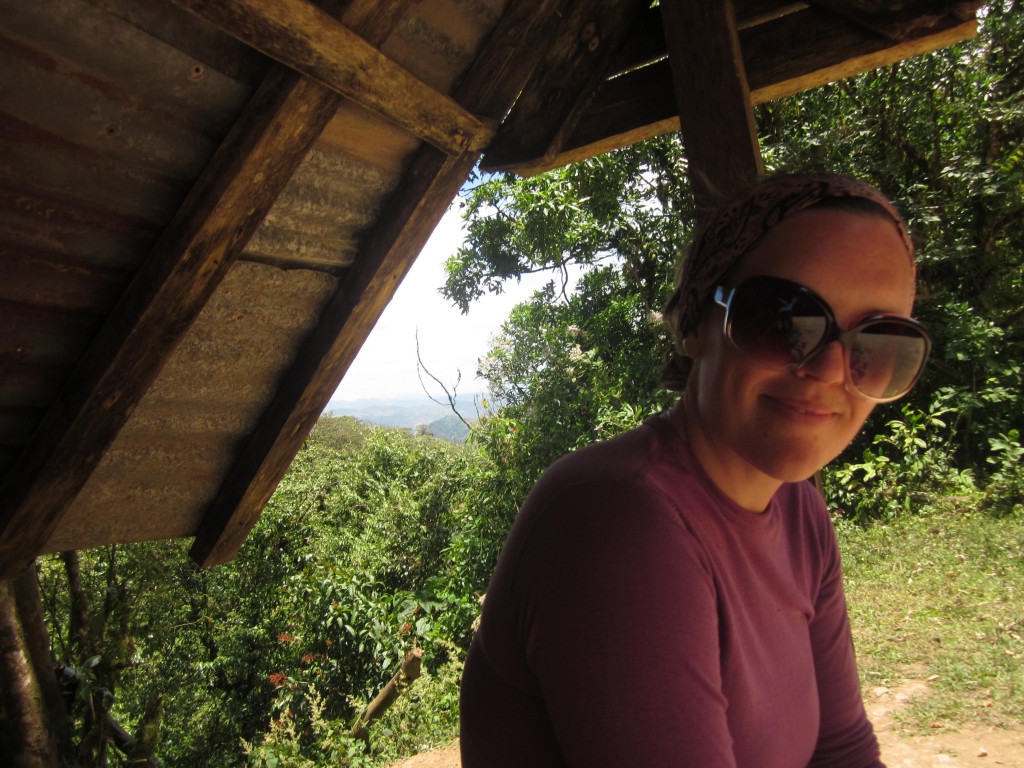 here we are waiting at the wrong spot. what a way to end that adventure.

like many other experiences on this trip, it will take me awhile to see what the experience in miraflor has changed in me specifically. but, the amount of hours I layed awake there thinking about the history of the families and the values they lived by, i was already examining and purging pieces of my former lifestyle in my head. even with nothing more than we can fit on a bike, i felt like i still take for granted the items that i possess and the availability of so many comforts we have in our culture. one major theme of this trip was to simplify, and nothing has spoken more clearly to that desire than our experience in miraflor. and being welcomed into the daily lives of some pretty incredible rural families beats the hell out of being in a tourist city and being asked to buy something at every turn. we won’t quickly forget these past four days as they are part of what we were looking for in taking this journey.

« miraflor: part one
time for some r&r »