so, bob and i quickly tired of ometepe and decided we wanted to see a little more of nicaragua before meeting back up with matt at laguna de apoyo, where he was doing a week of language school. we had been chatting with our friend, amy, who lived in managua for a few years and still has many contacts there. her husband, marlon (from nicaragua), lived there too and has siblings who are there, so we thought it was worth a shot to try and connect to some folks who would know the city as their own and whom we could talk with in spanish. so, we headed out for the capital, with only a slight bit of trepidation (we had heard rumors that there are no street signs there and that navigating is a nightmare). but, we actually were pretty excited for the challenge after days of lounging and talking to too many english speaking travelers.

so, we headed to managua and got some beautiful views of the smaller (yet still huge) lake managua on our way in. we totally lucked out once we reached the city because we headed through a few spread out neighborhoods and decided that before we got too deep into the city we’d stop and flag down a taxi. well, we were stopped at a traffic light and a taxi driver pulled up next to us to chat and find out where we were from and where we were headed. we asked him where the ticabus (well known bus station next to our hotel) was and he took us there for a minimal fee. we were actually pretty close and had no idea.

so, we got settled at our hotel and decided to do something totally american for our first night in the big city. we went to the movies! it was luxurious. we had popcorn, coke, and more air conditioning than is good for even the most over-heated human. so, we left the theater actually feeling pretty gross after over-consuming and being in the freezing cold for a few hours. we made up for it the next day by walking all over the city in the hot sun, trying to track down some of amy and marlon’s contacts. it turned out that everyone was out of town for semana santa, which is quite a reason to take a vacation down here. so, we kept coming up short on contacts, but felt that we got a pretty good view of managua in a day. it’s very spread out. it isn’t touristy in the least. and is really just a large, functioning city, complete with supermarkets, big hotels for business men, residential neighborhoods, and (yes) movie theaters. oh, it also has an entire historic area that was devastated by the huge earthquake in the 70s that used to house many of the government buildings. we didn’t make it to that area. i know, we’re horrible tourists. the highlight of our day was stopping at one of the supermarkets before catching a cab back to our hotel. it was the first one we’d set foot in for quite a long time. so, we stocked up on veggies, pasta, rice, and beans. we knew we’d have a kitchen at our next stop. so, we were pretty thrilled to get the chance to cook again.

as managua is not much of a tourist town, we did a pretty bad job documenting our non-touristy adventure. so here is the one picture i took there… 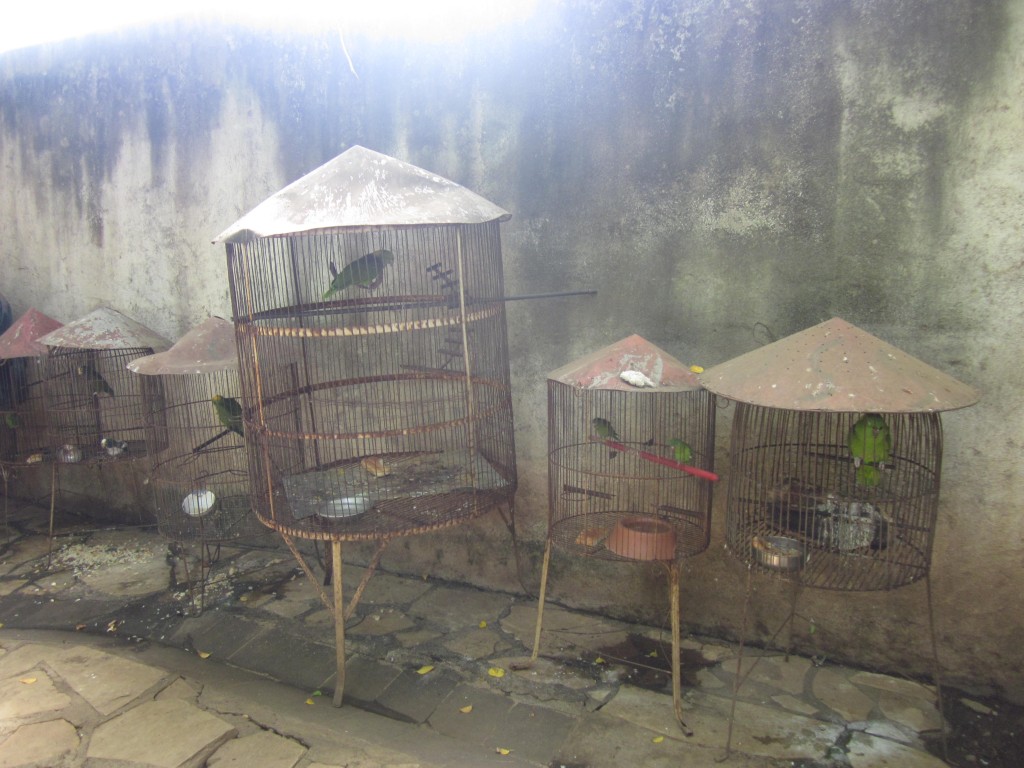 we were pretty satisfied with our trip to the capital. we wanted something completely different from our experience at ometepe, and it proved to be just that. so, after two days and nights in the heat of the city we were ready for a change. we had one more day before our reservations at the laguna began, so we thought we shouldn’t leave nicaragua without experiencing granada. it was only a short drive up to the laguna from there, so we thought it’d be a good stop over for a night. we headed there midday, as it only took about an hour (once you’re in the heart of nicaragua, everything is pretty close by moto). so, we pulled into granada and weaved our way through the market traffic to check out a few hotels. we accidentally found ourselves in the worst few blocks of the city for driving, completely surrounded by pedestrian shoppers, people wheeling charts, selling stuff in the streets. anyway, it was a bit difficult to maneuver the bike through the route we were on. and to top it off we were in all our gear in the hottest part of the day. so, as quickly as we could, we found a shady side street and parked the bike. bob took off in search of a hotel and i stayed to watch our stuff. we checked two places and by the second one we had an epiphany. we did not want to be in granada. it was pretty, don’t get me wrong. but, we had been in too many colonial towns to count at this point, and the heat of the city was not appealing in the least. so, we decided to drive the 15 minutes up to the laguna and check to see if they had space for us a night early. it became one of the better decisions we have made on the trip. not an hour after we realized that we didn’t need to be in the city, we were in our swim suits floating in the clearest lake i’ve ever been in…

…and that is where we stayed for the next five days, while the rest of nicaragua got wasted (or went to church, but many prefered the latter) to celebrate the culmination of the holy week festivities. it was blissful. maybe even a bit too blissful for our always on the move, traveling brains. but either way, for the first few days we were in heaven.