well, laguna de apoyo was just what we wanted. it was cooler than the cities, we could swim any time we felt the slightest bit hot (which ended up being about 4x per day), and there wasn’t much to do but sit around and relax. so, we felt fully rejuvenated after a few days there. the tricky part was that we were staying through the entire weekend of semana santa to avoid the chaos elsewhere in the country. so, five nights ended up giving us a little too much down time. we realized that after the pace we’ve been traveling at and adapting to new places and sights, it was hard to stand still for so many days in a place where you really have no other choice than to take it extremely easy. (i know, you should feel really sorry for us at this point!) but, it was interesting to see what it did to us mentally. 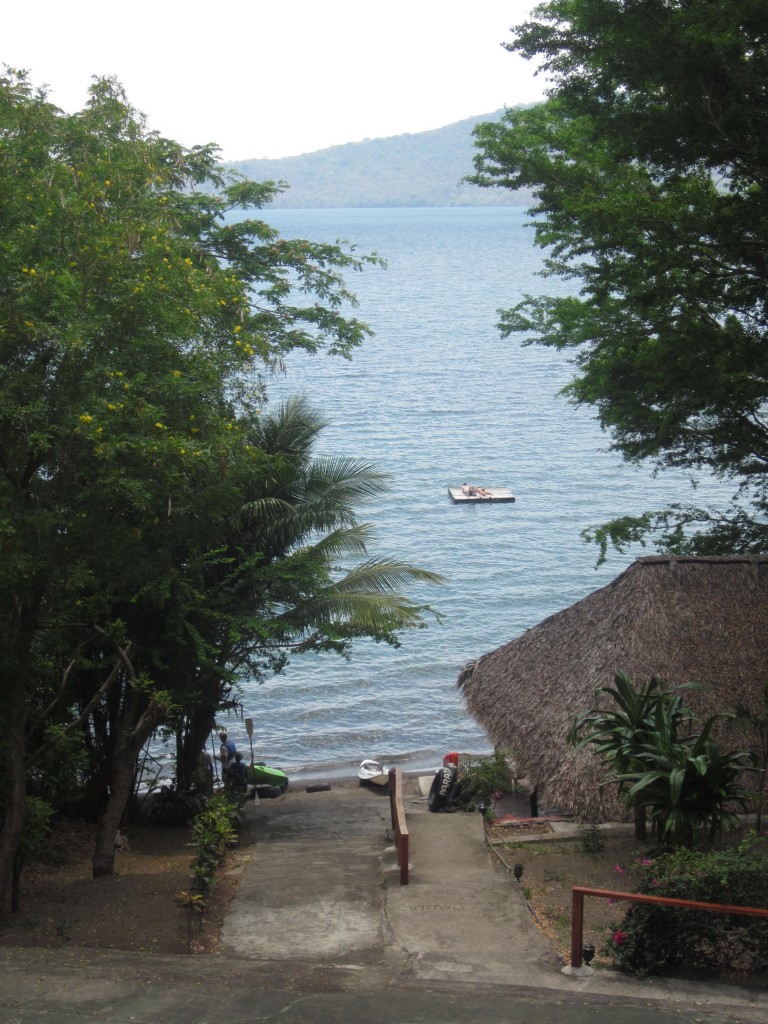 this was our hotel and it had its own floating dock. pretty easy living at laguna de apoyo. 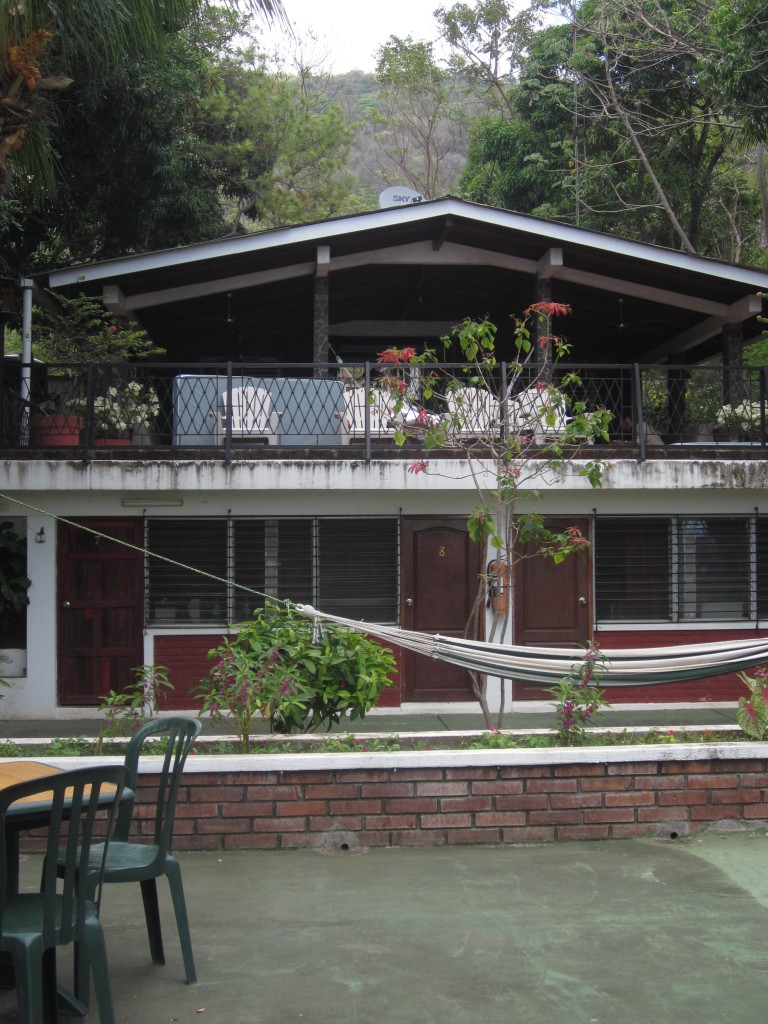 here's the hotel. it had lots of open levels where you could sit in the shade and get a breeze from the lake.

so, we felt extremely well rested by the time monday rolled around and we were pretty happy to be getting back on the bike, even in the heat with all our gear. we were headed to the coast, which would get us close to the costa rican border, to a small port town called san juan del sur. on our way out of laguna de apoyo we decided to head up to the little town, catarina, overlooking the lake and check out the view from above. we stopped just long enough to get a picture and got back on the road. 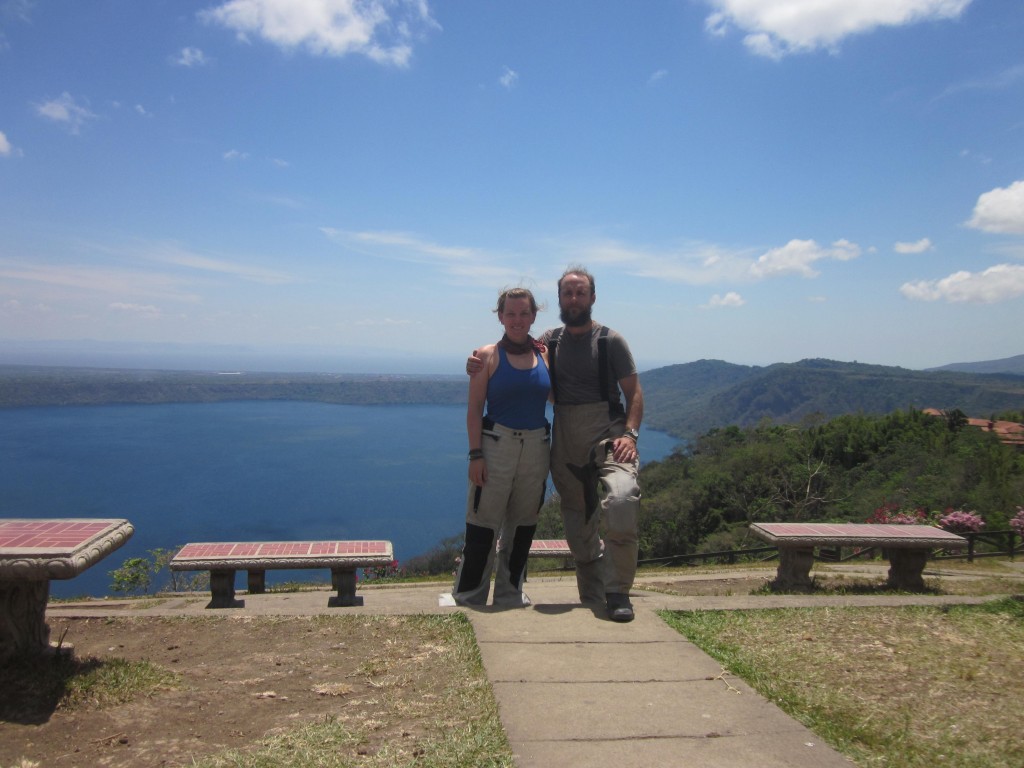 the laguna is in the near background and then you can also see granada and lake nicaragua in the distance.

so, back on the bikes and on our way to the beach. we were a little skeptical of san juan del sur, because we’d heard it was tourist central and super hot. but, we had a hotel in mind and headed to check it out. it had been there since the 1920s, way earlier than the tourist boom. the room was simple and cheap, and it had a great little balcony that got the breeze from the ocean.

so we got settled into our room and did the one thing we knew to cool down. we headed to the ocean to take a dip. and the water was surprisingly cold compared to the laguna. after our swim we headed to meet pete for dinner and to catch the sunset on the water. 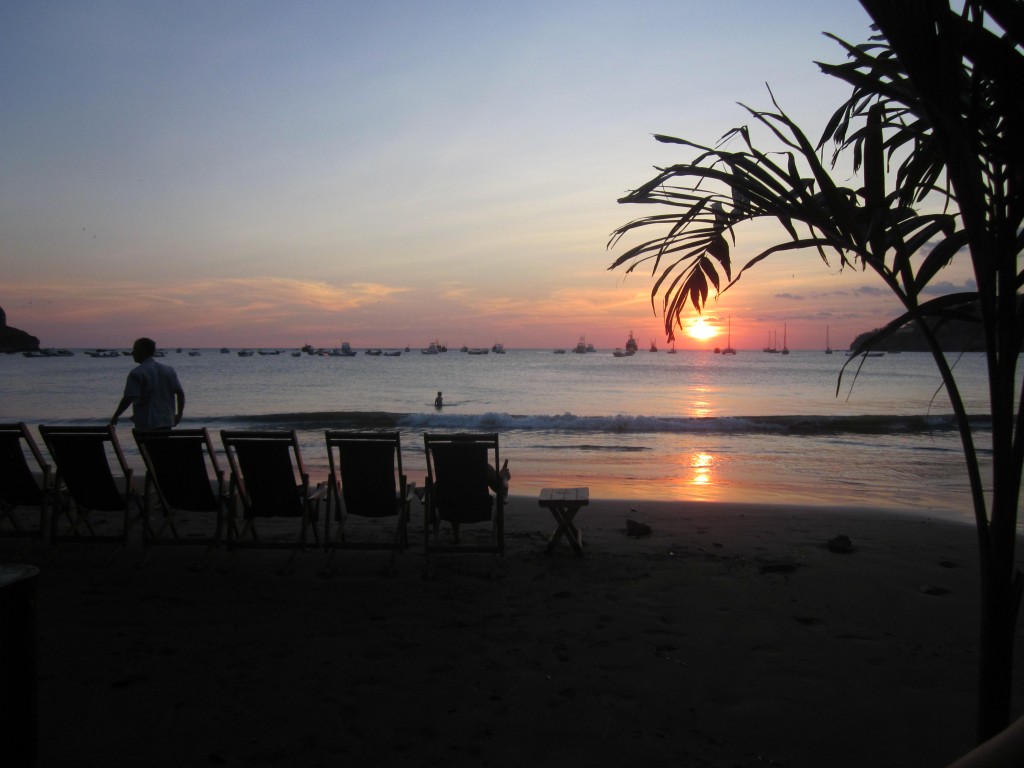 it was a pretty good one

i’d have to say this was our favorite ‘border town’ so far. because we got there the monday after the biggest party weekend of the year (they were literally tearing down the stages and removing all the trash while we walked down the beach), the city seemed extra tranquil and a little deserted. the next morning we headed out early for our fifth border crossing of the trip. we had been told it could take hours, so we wanted to have plenty of time to get into costa rica and find a spot to camp that night. so, it was goodbye to nicaragua, the land of socialist, laid back, friendly people. we knew before we left that we’d miss it. hopefully one day we’ll get back there.

« tooling around in nicaragua
the road conditions of costa rica »