first, sorry for the long pause. we’ve been in costa rica with bob’s mom for a week and i decided she deserved more of my attention than the blog.

so, we crossed the border into costa rica with zero problems. this one was a little bigger so i got some good people watching while i guarded the bikes. in my role of bike watcher i’ve come to realize that no one really cares at all about our bikes (unless they are excited about getting a picture or chatting about how powerful it is). so, my job is nominal at best. the other thing i’ve come to realize about borders is that you get out of them what you put into them. it’s kind of similar to the relationship between a pet and it’s owner (in my mind). if you’re an uptight, high-strung person, chances are your pet is going to be that way too. if you’re laid back… you get the idea. so, when a traveler comes to a border needing to import themselves and a large motor vehicle, if they come into the situation full of agression and stress, well it seems like that’s the kind of response you’ll get on the other side of things. long ago we adopted the border crossing style of arriving as early as possible, taking our sweet time to make sure we get all the steps right, politely telling the ‘helpers’ that we don’t need their help, and respectfully asking questions when we need direction. this strategy could one day prove to fail us, but so far it has been a great way to cross borders.  but, anyway, enough of that.

we made it into costa rica early in the day and headed to find the national park where we wanted to camp. 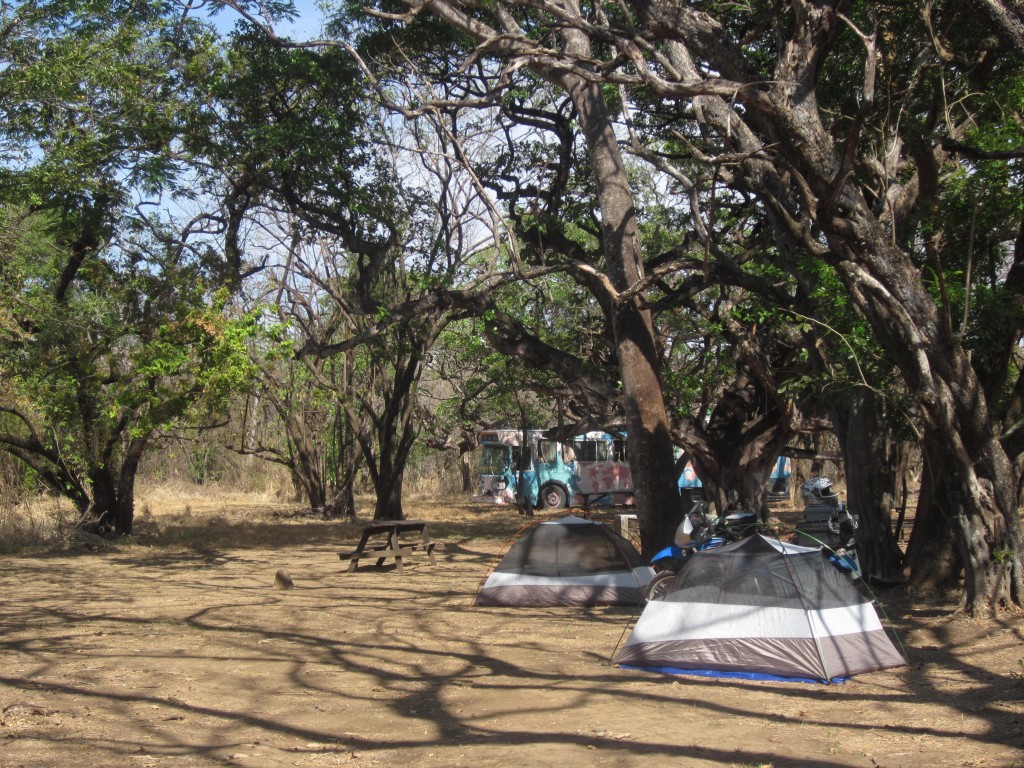 we shared the camp site with a bus of traveling performers (in the background) and a large group of biology students studying abroad from california. we did a tiny bit of hiking in the heat and then had a surprisingly cool night for good tent sleep.

the next morning we headed out early as we were trying to make it up into the monteverde cloud forest and knew this could prove to be a difficult day of riding if the road conditions were bad. we had been told that all roads in costa rica were bad, other than the CA 1. so, we chose the route that looked like it had the longest stretch paved and were on our way.

we got through the small town that ended the paved section and hit gravel. it wasn’t bad at first. so we headed along through the winding road. there were a few forks where we had to ask if we were headed the right direction, and the locals would say, ‘yes, that’s the right way to monteverde.’ but, they also had an inquisitive look on their faces as they checked out our bikes. so, we trudged on until we got to the longest, steepest hill any of us have tried to climb in gravel on the bikes. but, the thing about steep, gravelly hills is that once you’ve committed to climbing them, there is really no turning back until you have reached the top. so, we all kept climbing and thanking our lucky stars that we didn’t wreck on the way up. as soon as pete could, he pulled the bike off the road and we all looked back at what we had just climbed.

this picture doesn't do it justice, but it shows a section and you can see how loose the gravel was 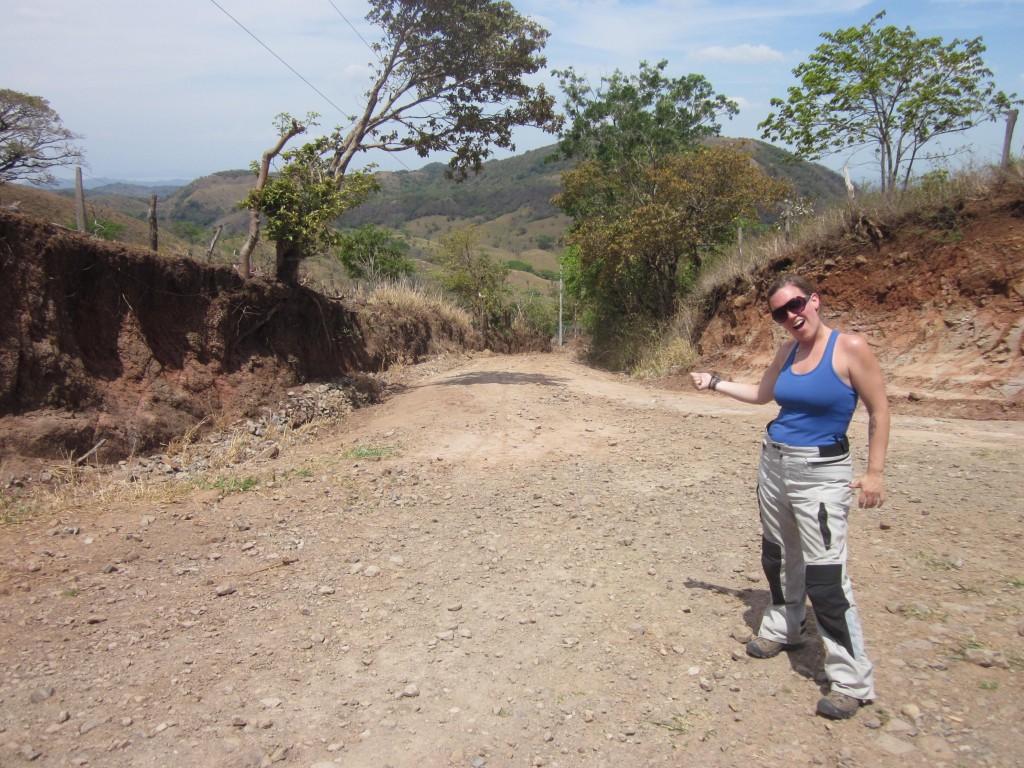 this was at the top of the climb. in the background where the road disappears is where we had just come up. and, i felt the need to be dramatic.

so, we had made it up the long, steep section and found ourselves in the middle of a beautiful expanse of countryside. it seemed like the craziest ascent was behind us, so we headed on down the road, hoping that it got easier from there. well, it did for a minute. then little steep, rocky hills would pop up and they were really hard to climb, too. so, halfway up one bob and i fell off. it was actually an easy fall when you’re going so slow. you kind of just topple over and roll off to the side. but the bike lost one of the side panniers in the fall. so, we had to take a break to get it back together and dust ourselves off. 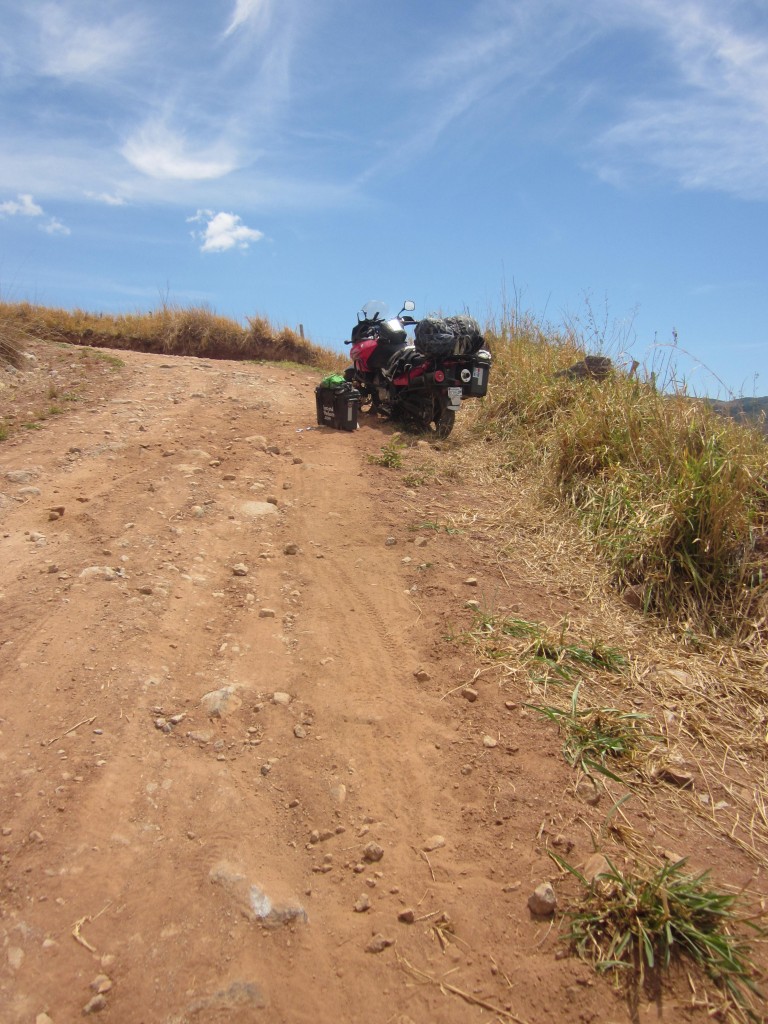 here's a better idea of the steepness. and that's where we dropped the bike. it was proving to be a tough morning of riding.

so, pete and bob went ahead on the road (pete on his bike, bob on foot) while i worked on getting my pannier back on. they wanted to scope out the next section to see if things got any easier, because lifting hundreds of pounds of bike every few miles is not a fun way to spend a day. their verdict was what i expected at that point… the road only got worse from there. so, we all discussed and decided it was better to head back down and try a different route. part of the reason for retreating was that we hadn’t passed another car in about an hour and we knew bus loads of tourists go to monteverde. so, the boys determined that there had to be a better route that everyone was taking.

the crappy thing about giving up on that route was that none of us wanted to go back down that hill we had so luckily made it up without falling off. with the huge loose rocks and gravity working against us this time, we were sure that we wouldn’t be staying upright the entire way down. so, we got ourselves to the top of the hill and made a plan of action. i was going to walk down (as i would only add extra weight and stress to bob’s descent) and checked out the condition of the road as it curved. then i would radio back up to the guys about which side to stay on to avoid the worst of the big rocks. i stopped after a few curves down to wait and see if they would need my help if the bikes fell.

it was a slow process and i was super nervous. we hadn’t gotten hurt so far in the day, but i didn’t think that descending this hill was helping our chances at keeping it this way. our bike fell twice from getting caught up in the loose rocks and not being able to speed up to get out of it because of the steep downhill. so, i helped bob lift it back up and get it going again. he and pete made it to the bottom in one piece, though, and i walked down the rest of the way to meet them. what a morning! and it wasn’t even noon, yet. it was definitely feeling like a work day at this point.

so, we made it to the bottom and decided we needed some refueling. we had seen a barbeque place on our way in from the CA 1. so, we stopped there for lunch and to discuss our strategy. i think the morning had taken all sense of adventure out of me (and all my energy) and i wasn’t easily convinced that we should try a different route that afternoon. i started to expect that all costa rican roads were in that condition and i didn’t have it in me to go it again in the same day. but, we headed north to take the route that the buses took (we found out after doing a tiny bit more research). and made good time on the paved portion of the road. we asked a few locals about the condition of the gravel section and they seemed super confident that we would have no problems. so, we headed out with the plan that if it got too rough we’d turn back before sunset and try it in the morning. 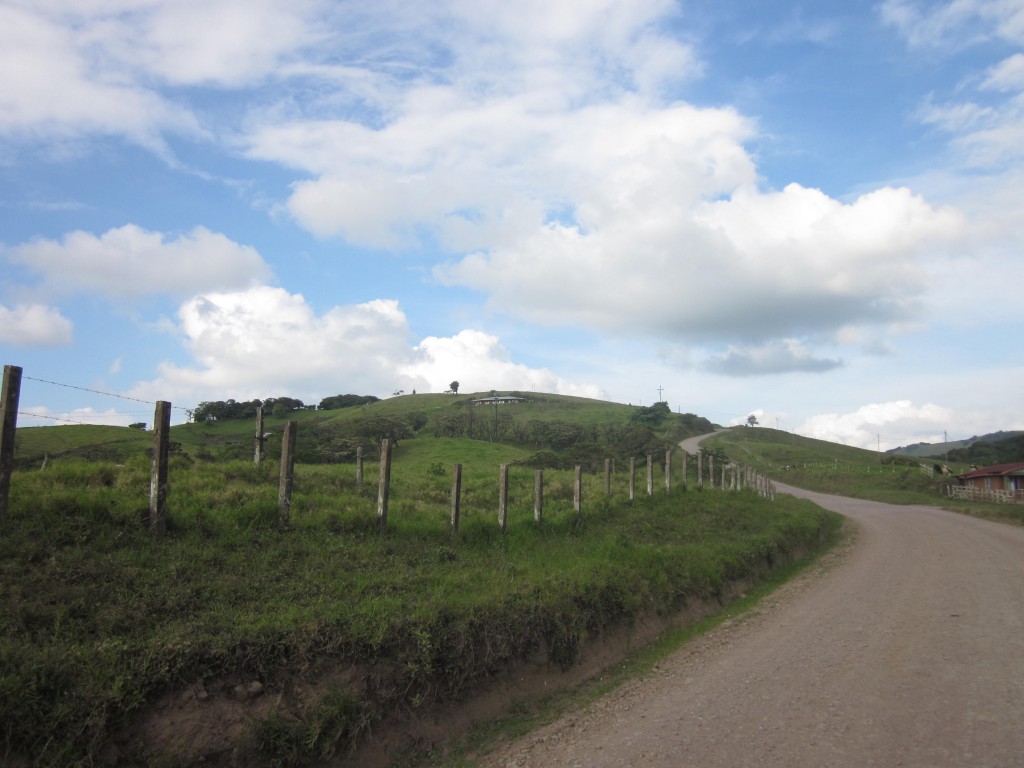 this was the new version of gravel. beautiful views of farmland and much better road conditions!

so we made it to monteverde in one piece. exhausted, but in one piece. we stayed in the little tourist community of santa elena where all the cheap hostels were, and found a place run by two siblings from austin, tx that was pretty cool. they let us camp in the middle of the hostel’s grassy courtyard and they had a kitchen we could use and free coffee all day. after figuring out just how expensive costa rica was, we were pretty excited to have this setup. and, we quickly decided that this would be our spot until we met up with bob’s mom three days later.

oh, and after a tiny bit more research from checking where pete’s spot tracker placed us on the map from that morning, we found out we were out in the middle of nowhere, had missed the turn we were supposed to take to get to monteverde and were on a completely different route that no one uses to get up into the area. oh well, it was a fun adventure and will make a good story. i’m just glad we are off that hill and in one piece.

« too much r&r
fun in the cloud forest »