we left santa elena on saturday morning and headed back to the coast. this time we would be spending a week in the small tourist town of manuel antonio. but, it was for a very specific reason. bob’s mom was coming to costa rica!! we were all pretty excited to have her around for a week, as she was the first family we’d seen in almost three months. but, the visitors didn’t stop there. we got to spend some time with my friend erin, who was teaching english in costa rica for three months and just so happened to be spending her last week in the country visiting the beach towns around manuel antonio. so, our first stop in route to manuel antonio was a tiny town on the pacific called jaco to have some lunch with erin and find out what her plans for the week were.

as we were leaving the little taco joint we ate lunch at, we realized that we forgot to get a picture before we suited up. it was hot so we snapped a quick one and got back on the road.

we made it to the condo an hour later and immediately realized we were in for a pretty swanky week compared to the way we have been living on the road. there are too many luxuries to name, but i’ll start with the ones we were most excited about: washing machine (!!!), swimming pool, fully stocked kitchen (with a great blender for smoothie making), amazing view of the ocean, AC… well, actually bob and i were a little scared of the AC at first. we had gotten so used to being in the heat all day and night, that we wondered what going in and out of a controlled, cooler climate would do to us. so, we decided to turn it as low as possible in our room and depend on the ceiling fan, which has been our savour in more than a few hotel rooms.

when bob’s mom, joyce, and her boyfriend john arrived they were already in full vacation mode. they had gotten a great tour of the area on their way from the airport by their van driver which included stopping to see alligators sunning under a bridge, tasting some nuts straight from the trees and stopping for a beer along the way. that’s an airport taxi that’s well worth it! so we all settled into the space and joyce brought out a bounty of items we had asked her to pick up for us in the US.

the soap, ibuprofen, and lotion are things we've found to be WAY more expensive down here. the skyline chili was a request from pete, which he thoroughly enjoyed cooking for himself in the condo that week (a taste he's been missing in the more limited cuisine options down here.) the riding gloves are a pair i had sent home, but then i lost my other pair the day we were stuck at the landslide because they flew off the bike before i realized they were gone. i'm excited to have a summer pair again.

as it’s plain to see, we are well taken care of by our moms on this trip (my mom helped get a new visor for my helmet in on this load of goodies). and it felt like christmas in april because we haven’t had this many new items at one time in a while. i actually got a little nervous about finding room for the extra supplies in our panniers. but, we rearranged and were able to make some space. with the new toiletries and the washing machine we quickly became cleaner than we’ve been in a long time. i was pretty happy that joyce was seeing this less stinky version of our traveling selves. i don’t think bob would have cared either way. overall, it was just really good to see her. 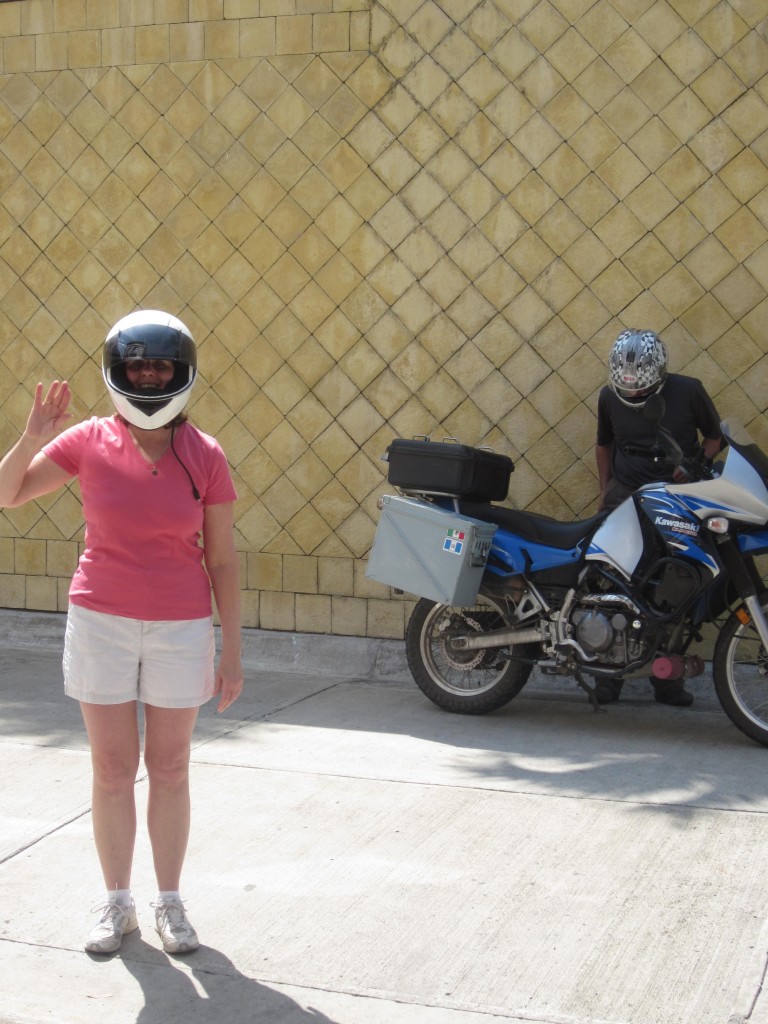 here's joyce preparing for her first motorcycle ride ever! she's a brave woman (and i think she even had fun on the ride).

and john hopping on the back of our bike. the boys took them down into town to make arrangements for their scuba diving adventure. they had to go up and then down some really steep hills, so they got a great introduction to motorcycle riding!

the view from our condo just before sunset. ridiculously pretty.

the boys chillin' on the beach, trying to find some shade from the heat 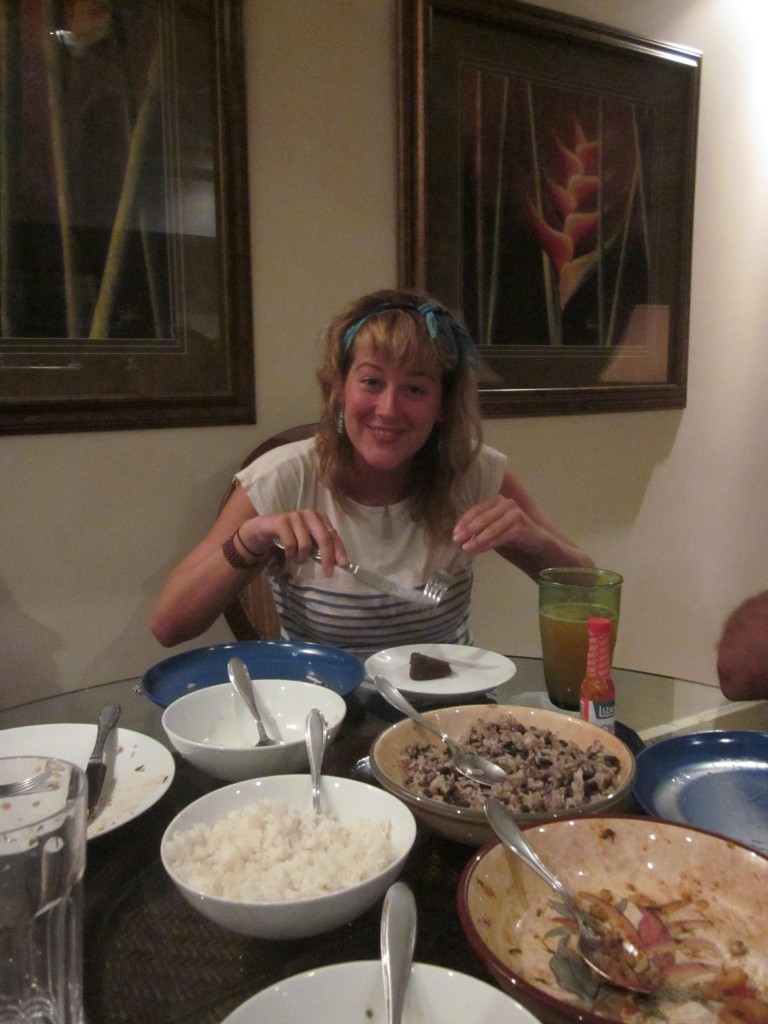 erin came down to manuel antonio for her birthday. we cooked dinner and gave her the last piece of rum cake we had and stuck a match in it. it was the best we could do in the way of birthday celebrations. but, it was a pretty enjoyable day for us, so i hope she felt the same!

bob and joyce on one of the beaches walkable from the condo.

it’s becoming clear to me that i have way too many pictures of the week for one post. so, more to come on manuel antonio to come…

Response to christmas in april

« fun in the cloud forest
more from manuel antonio »