it’s hard to believe that we are in south america! but, it’s about time. we ended up spending a little more time than planned in central america and i think it was starting to wear on us. once we walked out of the bogota airport into the crisp mountain air, we knew things were about to change. and what a drastic change it has been! bogota is definitely the biggest city we’ve visited on this trip. getting our bike out of aduana ended up proving to be the longest ordeal of our journey. but, it mostly involved us sitting in different offices and waiting on paperwork to be filled out and local politics between the shipping company and the aduana officials to play out. at one point we thought they were tired of dealing with us, and they even told us we had to come back the next morning. so, we headed back over to the girag office one more time to make sure that was the case. a nice, young girl immediately got on the phone and told us we’d have our bike shortly. so, we aren’t sure what happended with aduana, but they definitely didn’t act like they wanted to work that day. 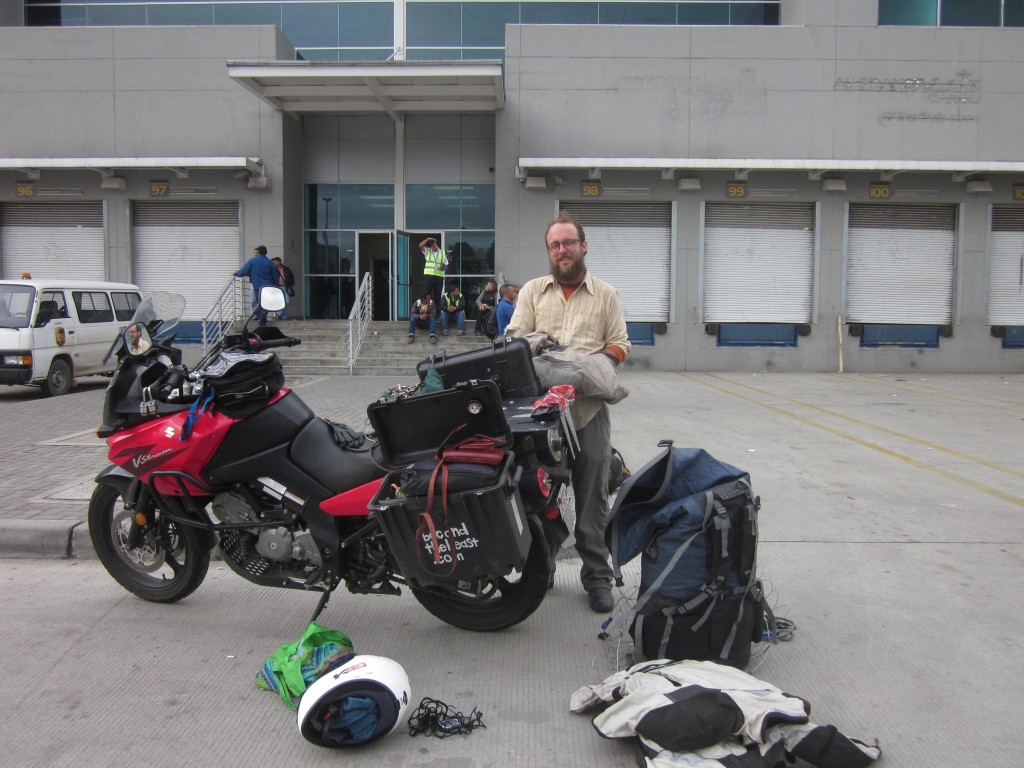 here's bob with our newly freed bike, which he had to drive down a makeshift ramp off the cargo deck. we were pretty excited to actually have it back in our care after a long day of waiting and wondering.

with 8 million people out and about on a friday evening, it was no surprise that it took us an hour to get from the airport to the neighborhood where we wanted to stay. but, it was an entertaining hour, for sure. with so much traffic in the city, about half the residents (it seems) drive small motorcycles or mopeds. and they zip through traffic like no other city we’ve riden in. once we found the area of town we were looking for we were fairly numb from not preparing well to drive in the cold rain. but, we were excited to be in a city that was full of life and activity after dark and didn’t mind the hunt for a hostel while trying to warm up.

we found a great deal at a hostel called tip top in the candeleria district. it’s the historic part of town, converted into an artsy, young, alternative crowd’s stomping grounds. it was a breath of fresh air after months of seeing nothing in comparison.

there's pretty amazing graffiti all over bogota, especially in the candeleria. here's a peek at some we passed... more to come on that theme 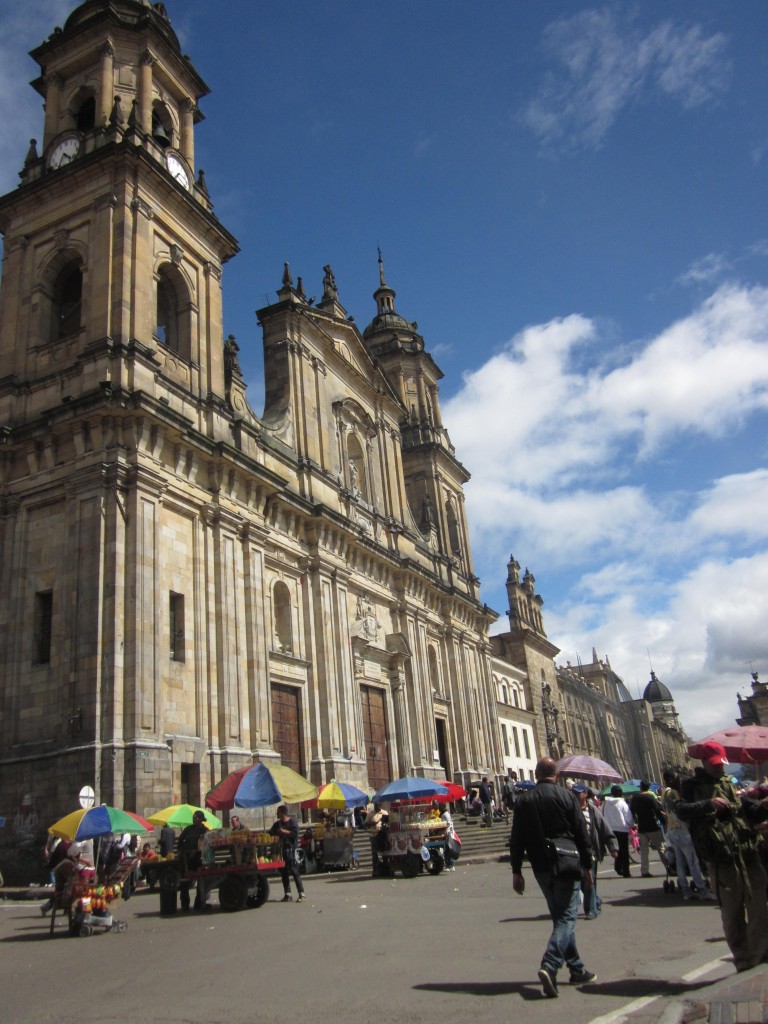 the church in the main square of the historic center. on sundays, this area is swamped with pedestrians and bicycles because bogota closes over 100km of highway and main streets for bicyclists for a large part of the day. pretty progressive idea for a huge city.

we also checked out the famous museo del oro (gold museum) because our new riding buddy, ryan from bellingham, told us it’s free on sundays. it was definitely impressive. but, my favorite part was an exhibit where you went into a dark room and then indigenous(?) music and chanting begins and a light show displays gold pieces behind a circular wall of glass. it was like being in an aquarium, except that the fish were ancient pieces of gold and the music was great. stunning. 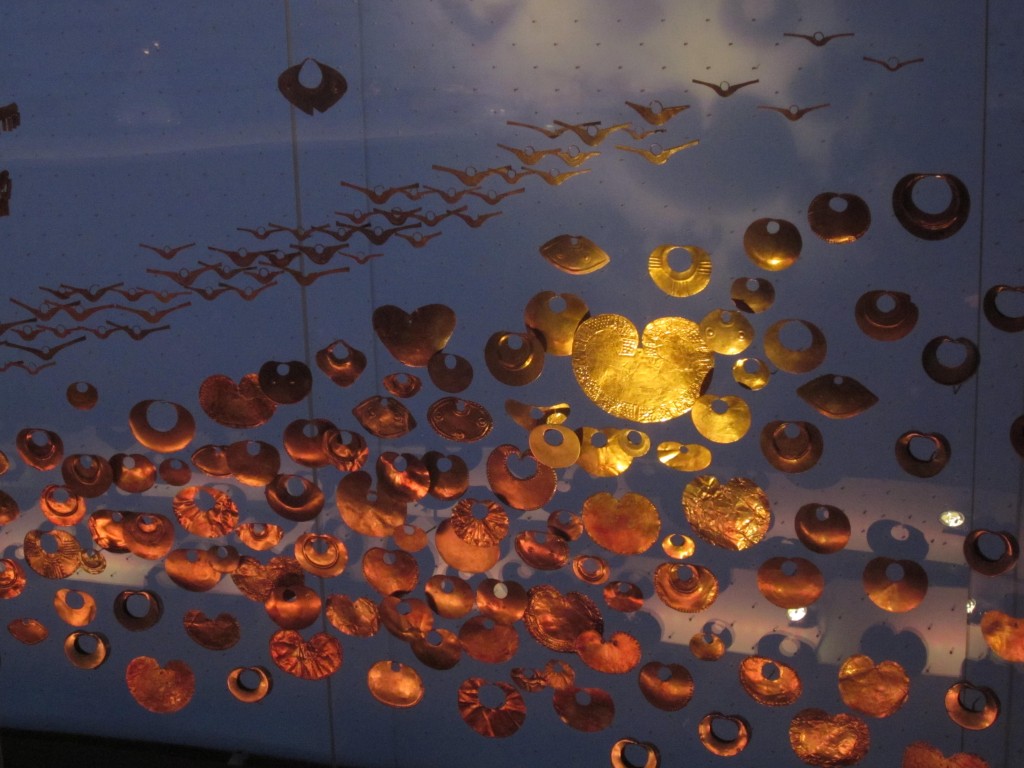 this last one, one of my personal favorites, was this weird, modern-looking cartoon art piece. but, there were thousands to check out. if you're ever in bogota i suggest you head to this museum.

while in the city we also got to meet up with some friends of friends who live there. one, andrea, invited us to her birthday party at her grandpa’s house. and we had a wonderful time practicing our spanish with her family and trying all the colombian beers and colombian liquor (called aguardiente) that they could serve us. we also got a beer with a friend of our friend juliana, francisco. he’s a student at the national university, but was kind enough to take time out of his studies to chat with us, help us practice spanish and discuss things to see and do in colombia. we made a date to go out dancing with him and his friends this weekend. that’s something we haven’t done in ages, so i’m pretty excited. meeting people who feel like ‘friends’ has really revived us. there is new life in the trip now that we’re able to practice our spanish in a more meaningful way and learn about the culture we’re visiting.

speaking of friends… we have visitors coming! bob’s sister emily should be here on monday and our friend niki comes the next week. so, we’ll have a busy social life soon enough. we escaped the city for our last few solo days and headed to the mountains because we’ll get plenty of bogota time in the coming weeks.  just as we expected, colombia is gorgeous. i’ll post pictures from our days in the countryside soon.