i don’t know how to add an accent mark to that last ‘a’ but put it on there.  it gives it a good ring.   instead, i just put an exclamation point.  we have totally overused the exclamation point as of late but we are a little excited about bogota and colombia as a whole.

this is bob writing by the way, and i love a good city.  i have a lot of criteria for what constitutes a good city in my book and in a very strange way bogota fulfills almost all of them.  strange is a good start to what we have been able to make of the city in the short time we have been here.  there is an endless stream of street culture here, from high brow to sleeping on the street, and everybody seems to have a level of respect for whatever rung of the proverbial ladder in which people are existing.  it is almost overwhelming but is really comforting at the same time.

bec and i stopped into a coffee shop/book store and chatted up one of the employees the other week.  he gave us a movie recommendation that seems, at least from the trailer, to give a good ‘real’ image of what bogota is.  the movie is la sociedad del semaforo. here is the link to the trailer: http://youtu.be/lpR233i8Cfk (hopefully that works) i still need to find the film in order to see it all, but the premise is about a bunch of traffic light performers who figure out how to make the traffic lights slow down a bit and therefore make more money for the performers at those specific lights.  i haven’t seen the film yet, but the trailer looks pretty cool and i think the concept is pretty intriguing and deep.

anyways, let’s get to why bogota is a cool city.  first, to keep with the movie theme, graffiti.  i never had a chance to visit nyc during the 80′s and 90′s, when a lot of people who i really respect have said that it was a little seedier but also a little better.  i kind of feel like i am getting a taste of that type of city.  there is a really great documentary bec and i watched a few years ago called style wars about the birth of graffiti in new york.  graffiti really started off on the right foot, but some taggers kind of made things stupid.  colombia doesn’t have any laws against graffiti and there seems to be a pretty high level of respect for the artists so the art stays in tact.

say what you will about graffiti, but it is everywhere in all of our lives.  we just usually see it in the form of advertisements from coca cola or some bank or cell phone company.  it’s nice to see what somebody that has enough money to buy a few cans of spray paint has to say to the rest of the world for a change.  give them the freedom and enough time and they can really make a good addition to the asthetic value of a city.  another good movie about this bec and i saw at the guatemalan film festival at bellarmine university was regreso de lencho.

here are some other favorites we have seen so far. 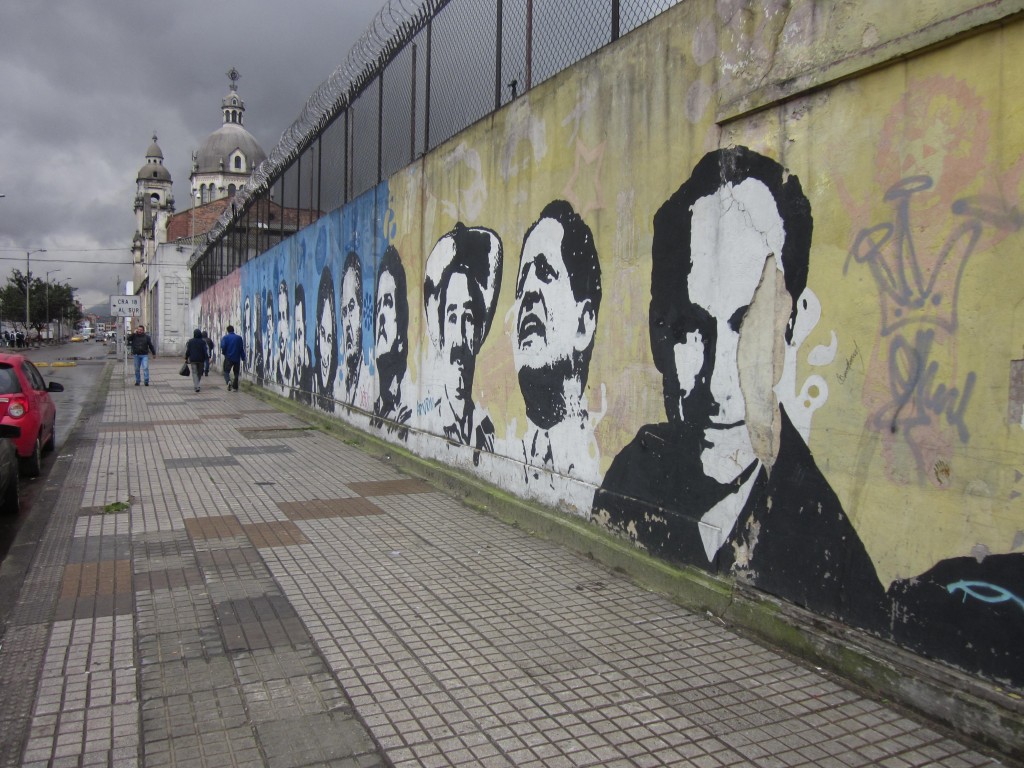 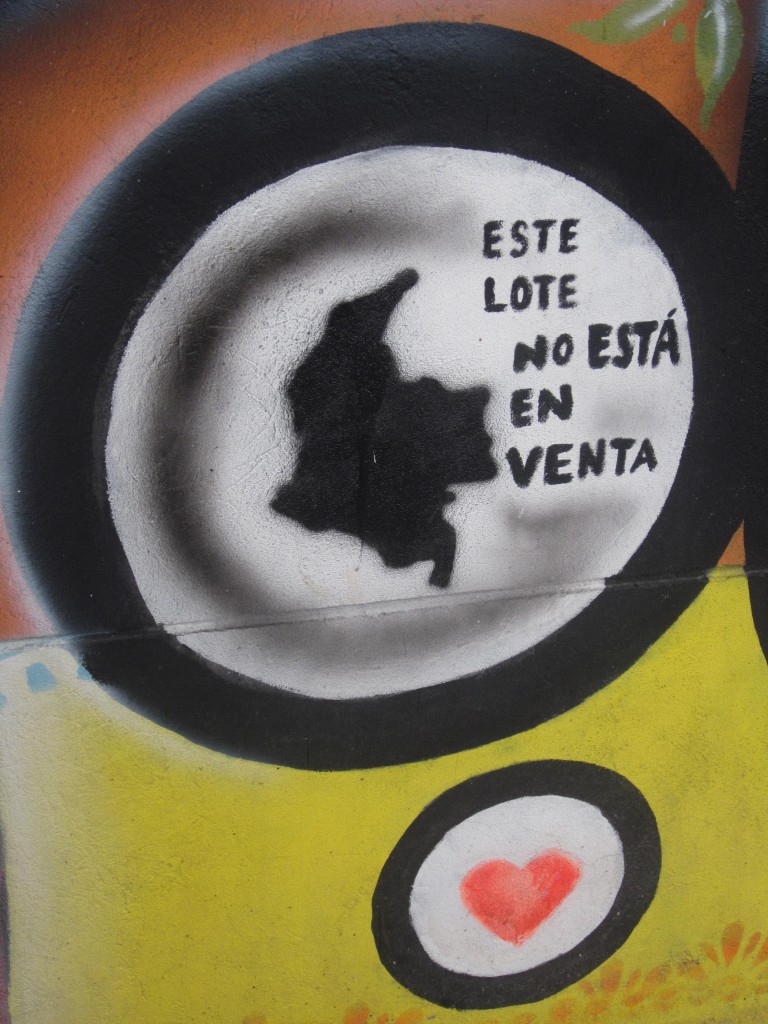 the folks above all hope so 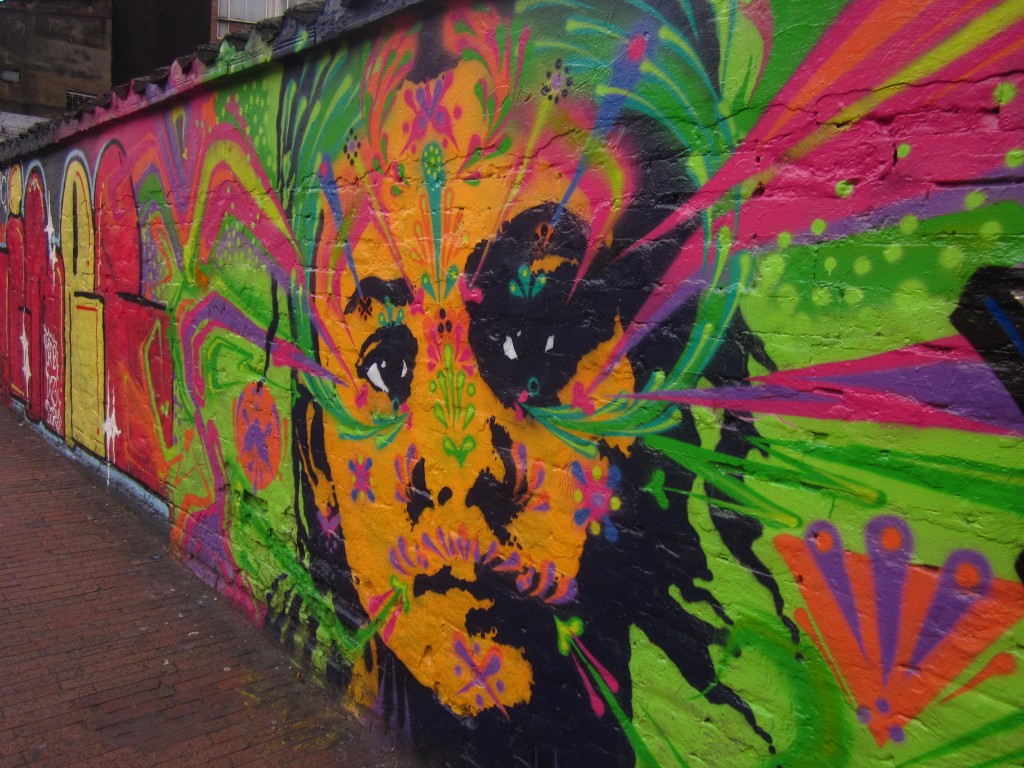 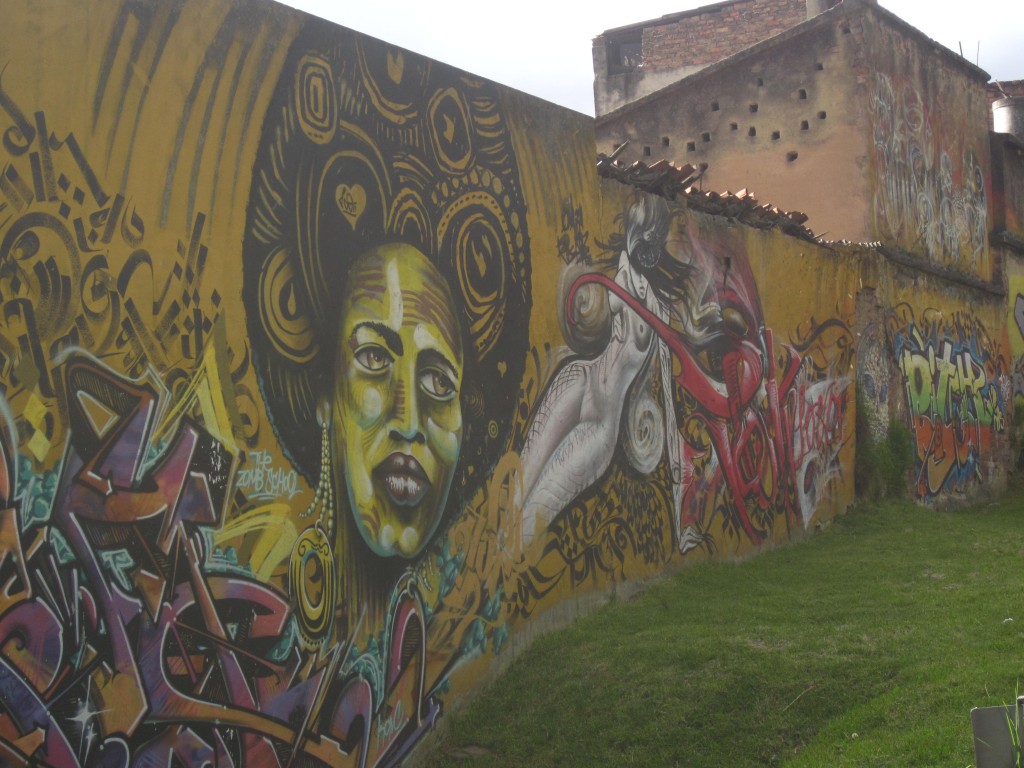 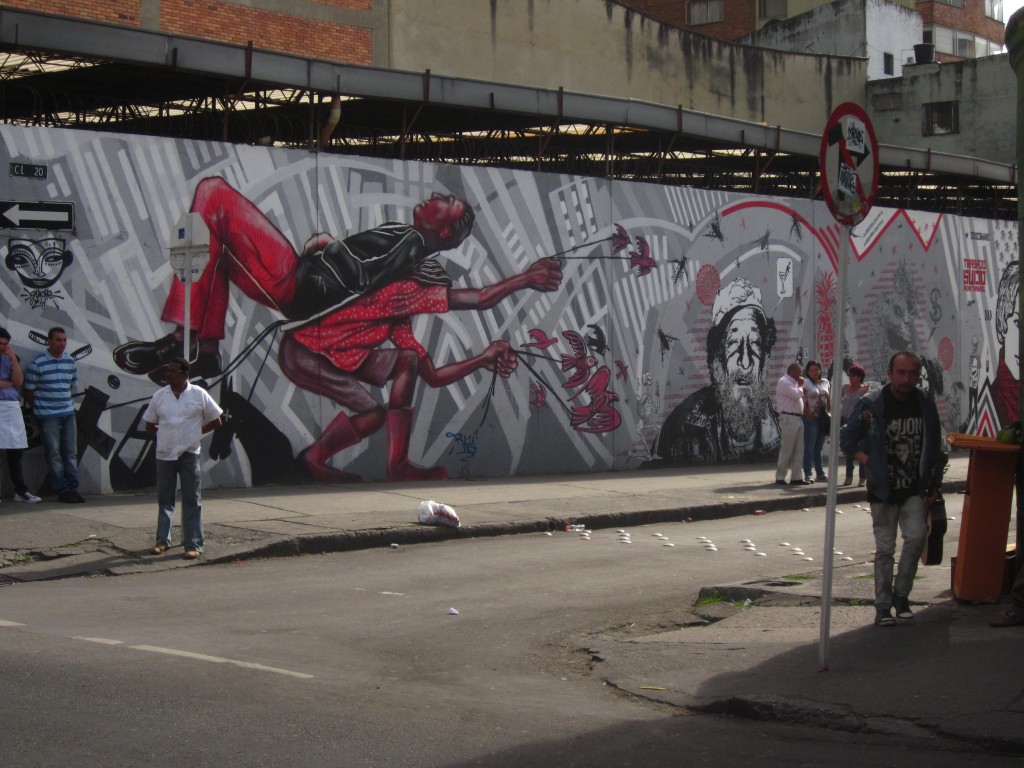 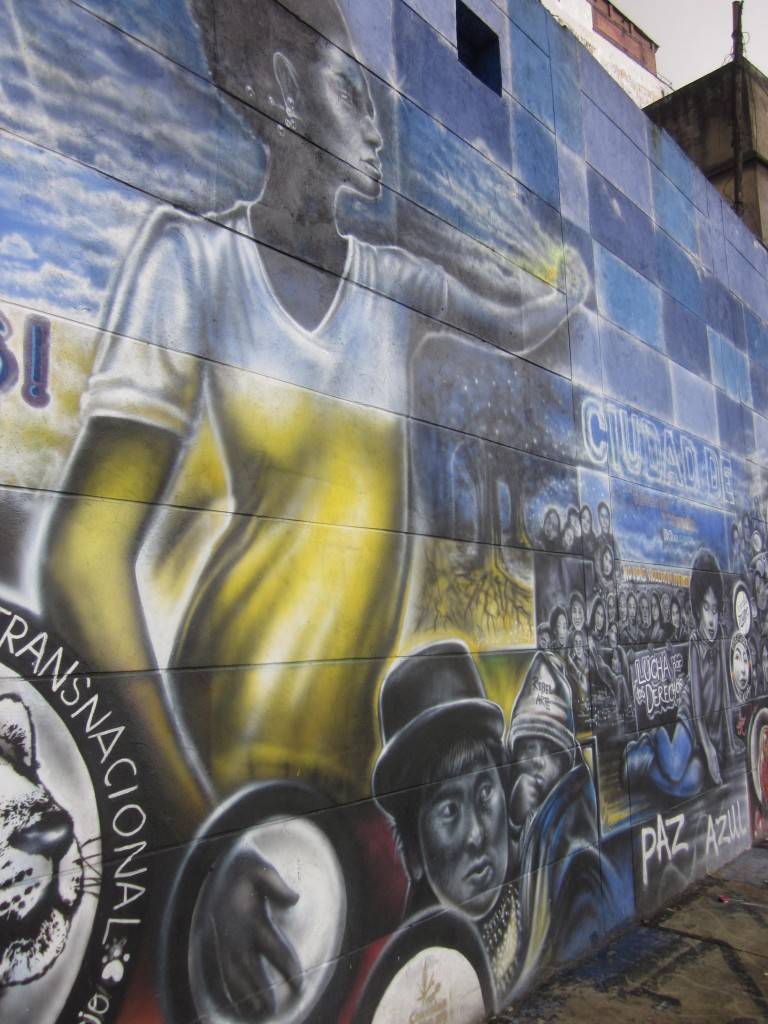 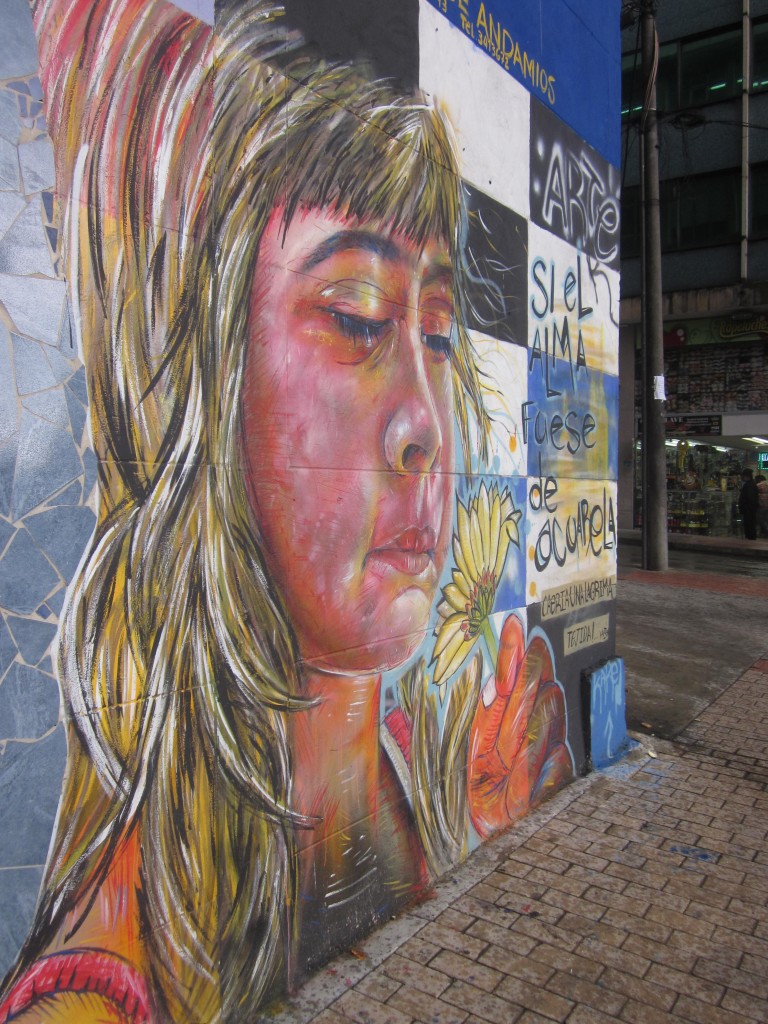 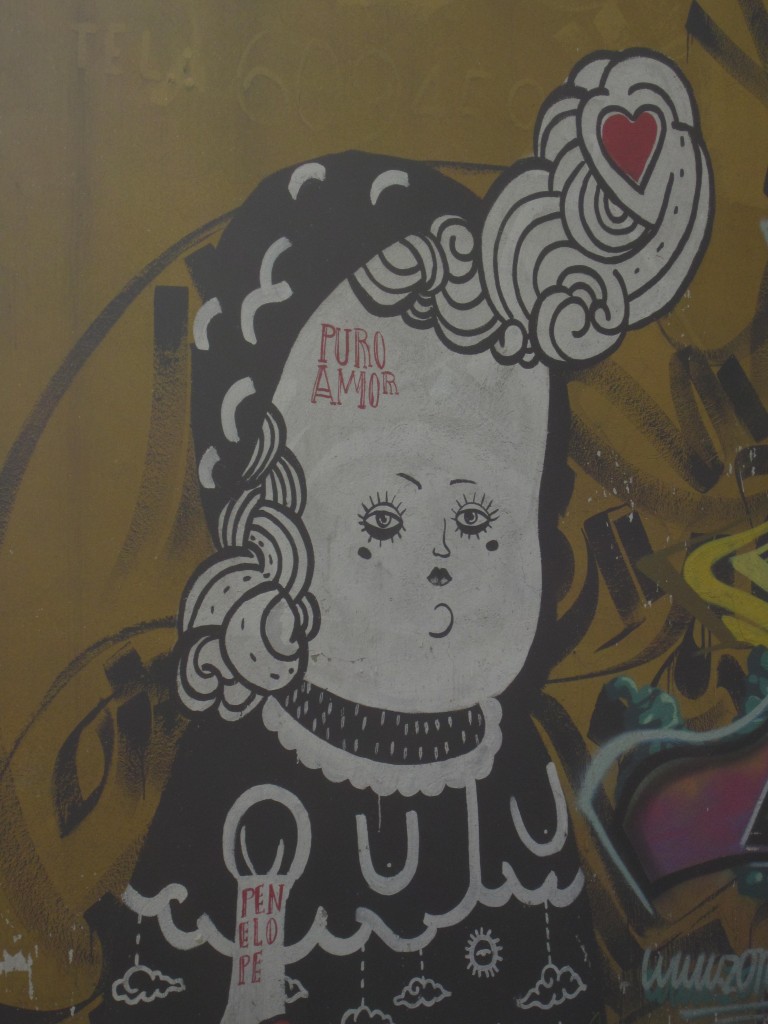 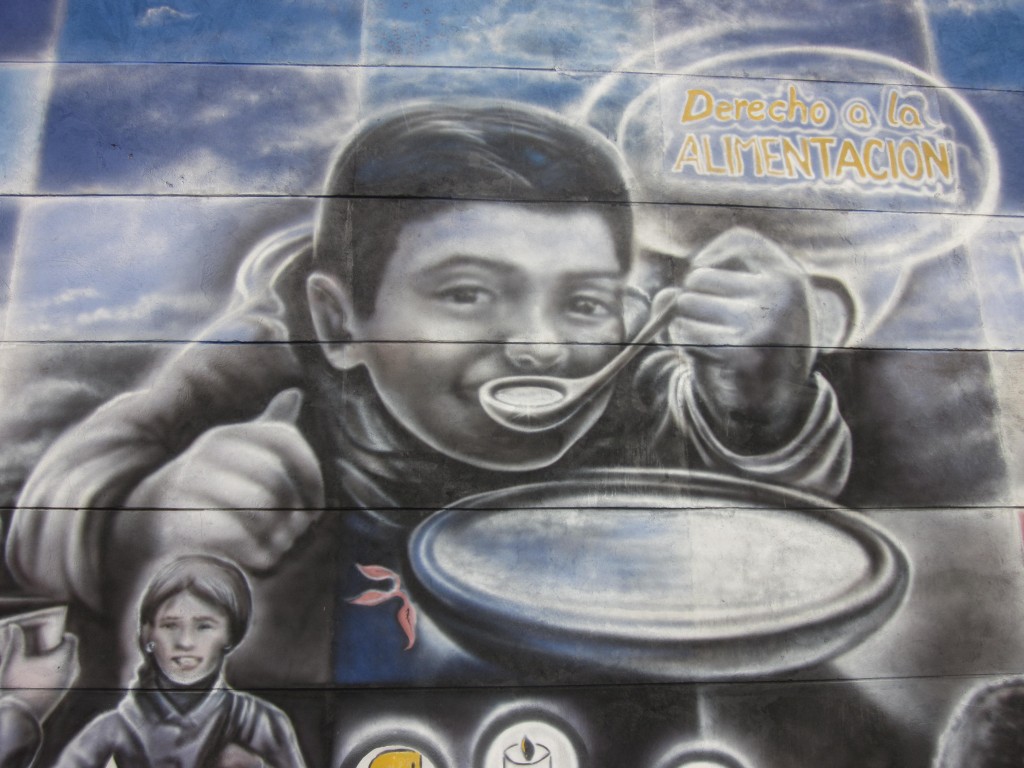 next on the list of things a city really needs in order to be a place people would like to live:  transportation and green space.  bogota has two forms of bus.  there is the type you flag down randomly in the street, which is kind of cool in its own right, and there is the transmilenio.  the bus in the street sucks because it is stuck in traffic with the rest of the gas guzzling fools.  (even on a motorcycle the traffic is terrible here, and we can drive between the cars)  the transmilenio is a different story.  it is basically a bus system that has no traffic.  they put up a concrete barrier and placed a ticketed station in the center to move a system of accordian style buses through the city.  it is basically like a subway but with very low infrastructure cost.  we have been taking it as of late and have hardly waited more than five minutes for a bus that will get us where we are going fast! 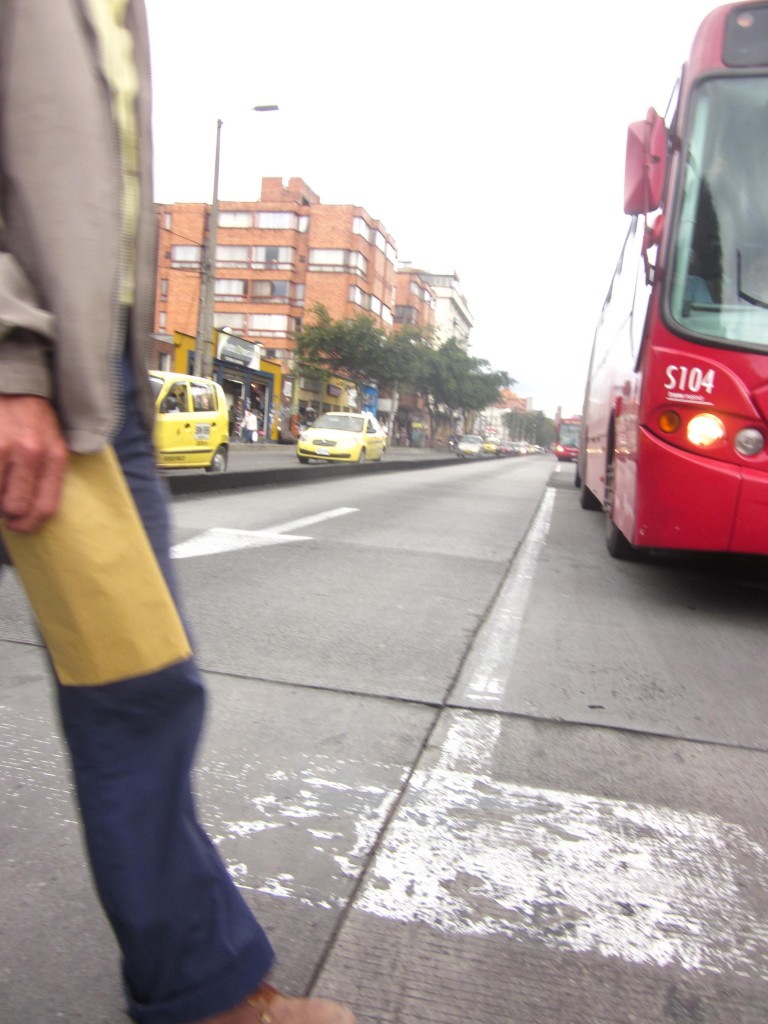 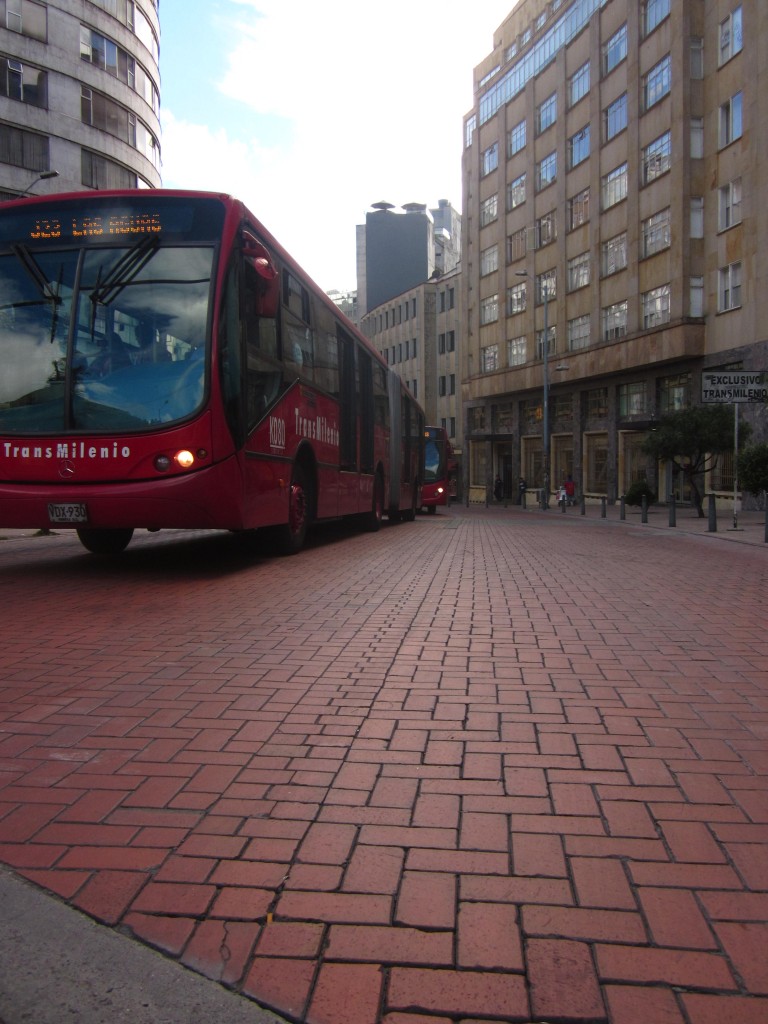 this city is littered with a plethora of parks and other types of green space.  they range from small neighborhood parks with benches, to large parks with lakes, to the parks between two roads that run for kilometers. 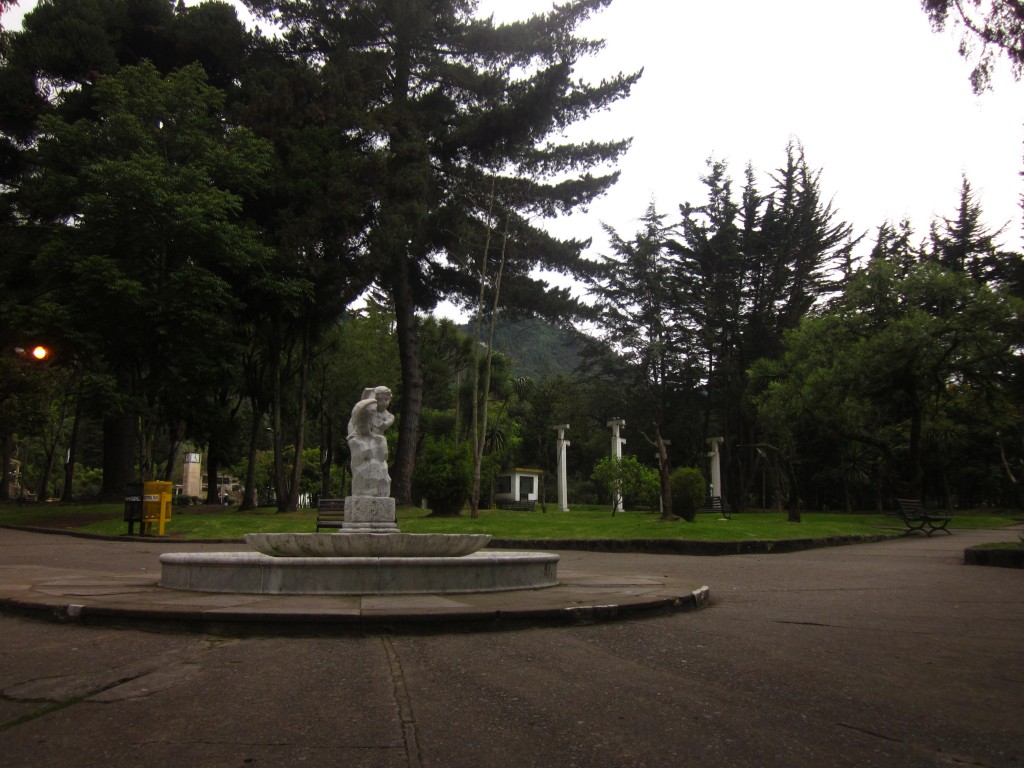 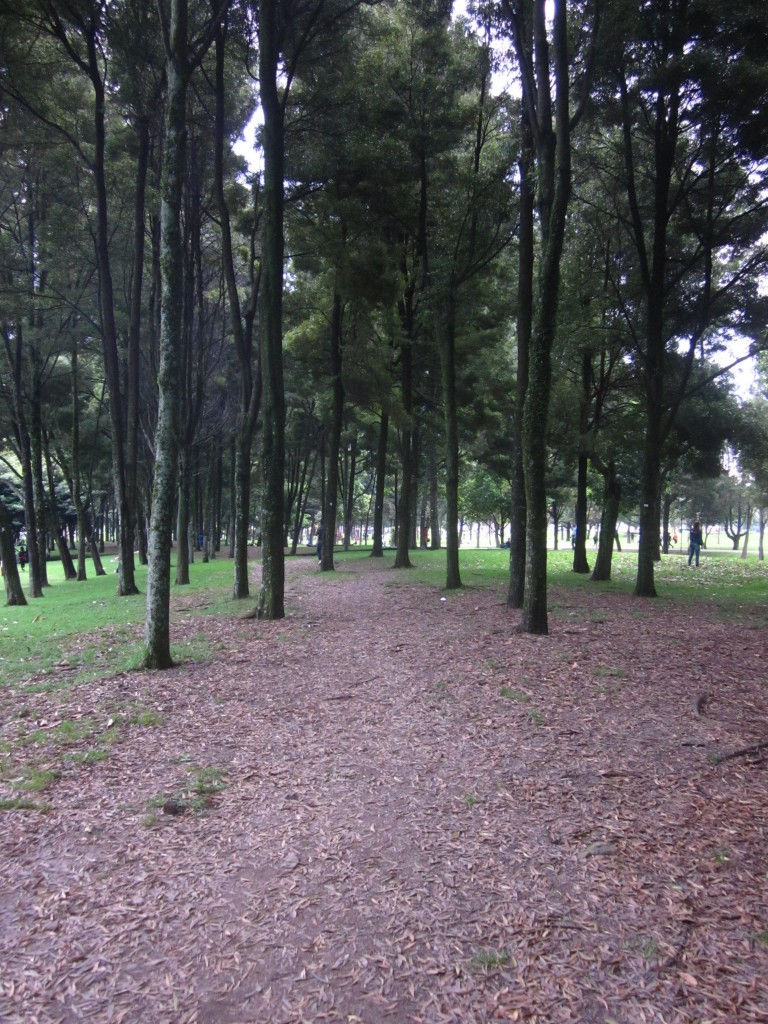 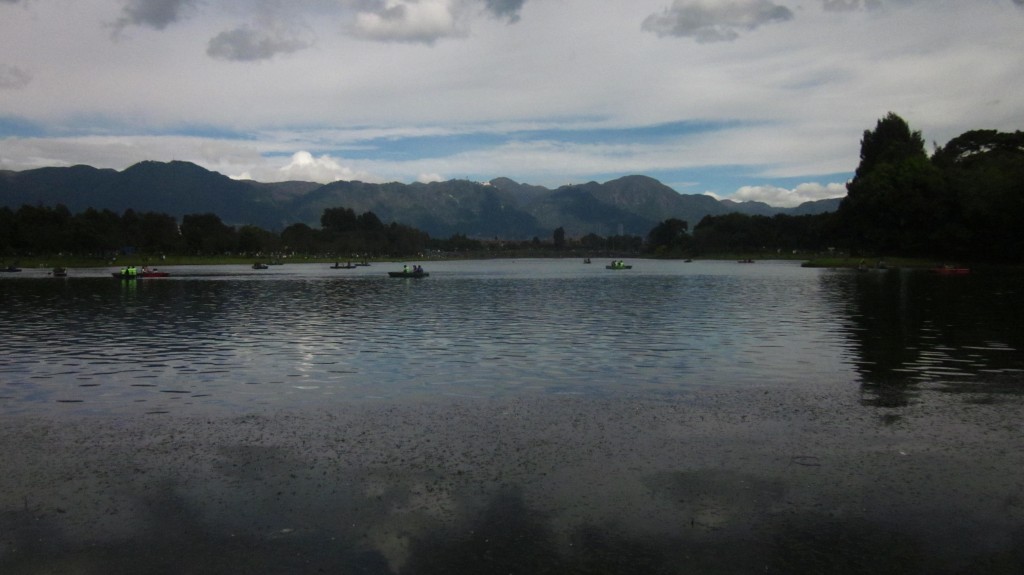 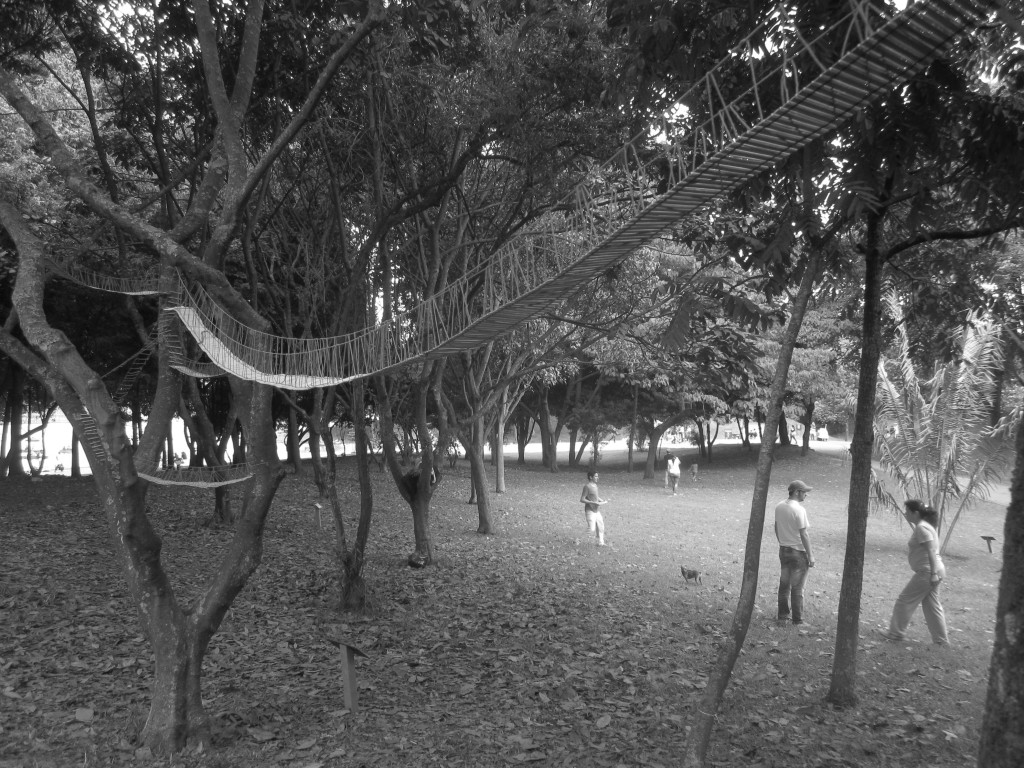 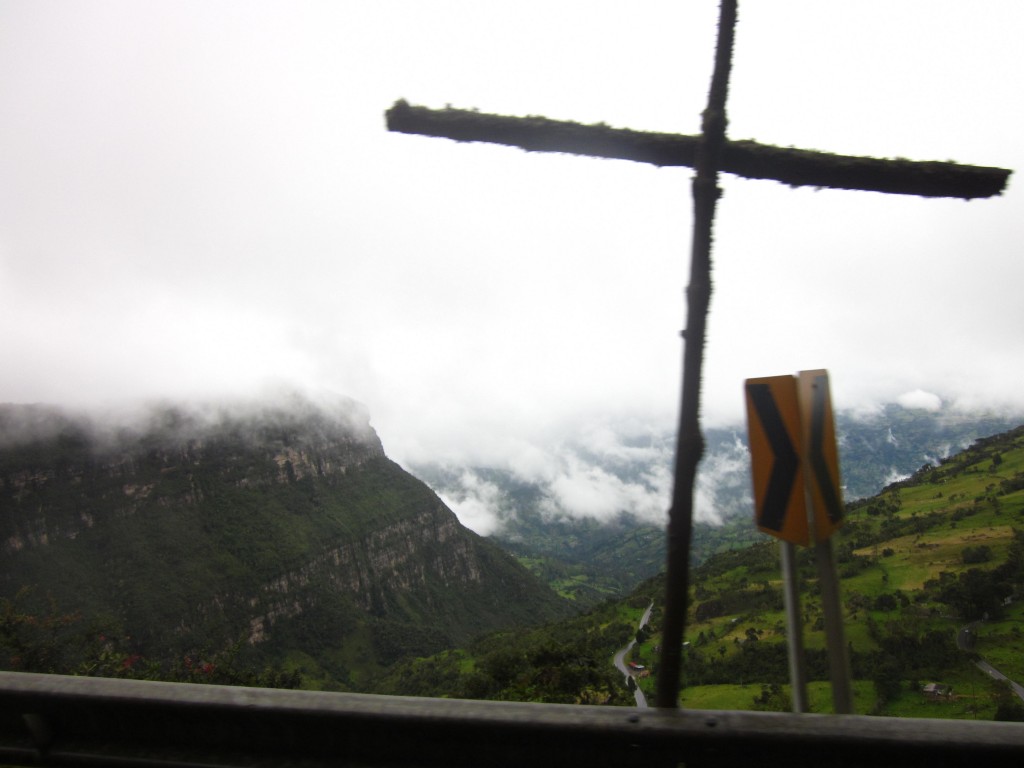 one of the weirdest things about this city is that all of the stores that sell a particular type of product all place themselves on the same street.  it is totally bizarre to see both sides of a block selling nothing but light fixtures, or the same three types of blankets, or evrything you could ever want photocopied.  there is one section of town that specializes in motorcycles.  it makes for a really good bike wash. 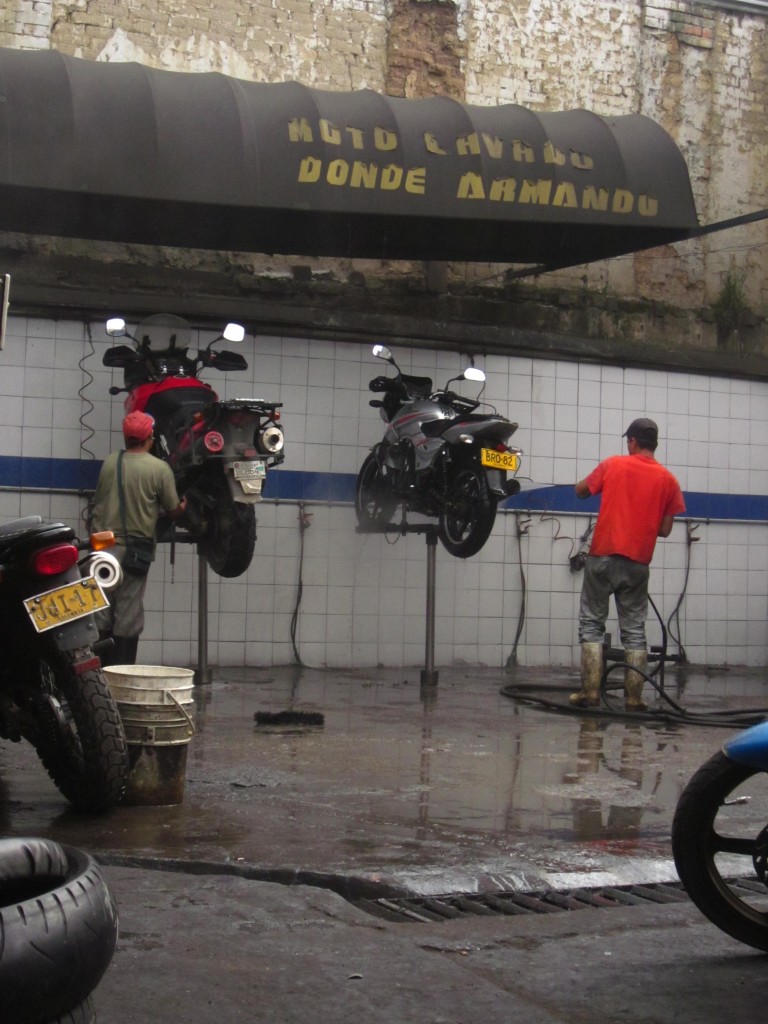 at fist it seemed like this was a terrible idea because your competition is right next door, and they are selling the exact same thing.  then one day, i was at a motorcycle shop and i wanted to change my oil while i was there.  they had nothing to do this, but their friend down the street did and he kindly lent his oil pan to them.  i don’t know if this same principle works for the light fixture shop but it is nice to see people working together, rather than trying to beat the competition.  it seems like in the value rankings, making money factors a little lower than family or community.

moving on with the list, the arts and nightlife.  there is no shortage of art, music, and places to get your drink on here.  most of the installed artwork keeps with a lot of latin american themes and is really great.  there are some great museums here and a lot of good art scattered through coffee shops and such.  music is everywhere and colombia has some really deep rooted styles of their own that have influences from around the world.  it is the heart of cumbia and you can hear a million different interpretations of how to use the beat.  on my soundcloud page i have posted one street recording from a group i have stumbled upon a few times.  i’ll get to posting some other recordings here soon.  you can always drink while catching a show, but there are some great mellow bars here too.  we finally visited one bar i had my eye on for a while, el viejo almacen (the old warehouse/grocer/grocery store).  i really liked it.  dark and kind of cramped.  a few older folks ran it and played nothing but a bunch of old tango music on 78s.  the drinks weren’t too expensive either.

and last but not least, the problems.  no city would be complete without a set of disparities and problems.  i know i have painted a pretty rosy picture of bogota, but i will definitely say that a lot of travelers we have come across in other parts of the country want nothing to do with this city.  they think it is dirty, cold, dangerous, and polluted.  they may be right about a lot of that (i would argue pretty hard against the dangerous part) but it is also a city, and a growing one at that.  there are a lot of great people here who are creative and also really nice and helpful.  there are a lot of ways to keep yourself occupied and interested.  we’ll see if anything pans out to keep us here longer than the month and a half that we have had.  it’s looking kind of doubtful, but in a good way, so far.  (more of that to come in following posts) one thing for sure is that the time we have had here has been good.  and if we have more, there will be plenty to get into and explore.