saturday started out to be pretty uneventful. we slept in, made some breakfast at the apartment, and piddled around while discussing what we wanted to do in the city that afternoon. we remembered that there was a venezuelan youth orchestra playing at the national university for free. so, that quickly became the center of our plans. we walked down to a different neighborhood to catch the transmilenio and were on our way with plenty of time to wander the university before the concert began.

while we were on the bus we realized that we’d be only one stop from the soccer stadium, el campin. making it to a latin american professional soccer game has been on our list since we started this trip. we just haven’t stayed in one place long enough to know when and where they are happening. but, bogota is different. there are two professional teams locally and many in the country. we actually tried to go to a game when emily was visiting, but apparently it was one of the biggest games of the year and was sold out by the night of the match. so, we made a split-second decision to stay on the bus and ask about when the next game would take place at the stadium before walking back to the concert. as we pulled up to the stadium stop, we discovered that the next game might be sooner than later.

there were cops at every entrance, on every tier and at the exits to the transmilenio. so, we hoped that maybe we had gotten lucky and there was a game that very night. not ten seconds after we descended the ramp from the bus station did we get approached by a guy in a very official looking millionarios jacket (one of the local teams) who asked if we needed tickets. because he looked so official and i am the most gullible person in the world, i said, ‘yes.’ and we started up a conversation. i asked where we should buy them and how much. he started walking us down to the center of the stadium and said he could sell us tickets for $13 apiece. (this did not seem unreasonable). then he took the two tickets out of his jacket and said we’d pay when we got to the entrance.

bob immediately felt sketched out and stopped for a second to try to get a handle on what was happening. the guy was very reassuring. he showed us our seat numbers on the tickets and after another moment’s hesitation we were being escorted into the VIP section of the stadium by the police who were manning that entrance. we hadn’t paid a dime yet, though. so, we were shown our seats. they were in the government section in the little glassed in boxes that very few people are allowed into. we were dumbfounded as to what had just happened and how quickly it had. but, we decided they were legitimate enough to get us in, so we tried to just enjoy the fact that we were going to see a real, live professional soccer game. 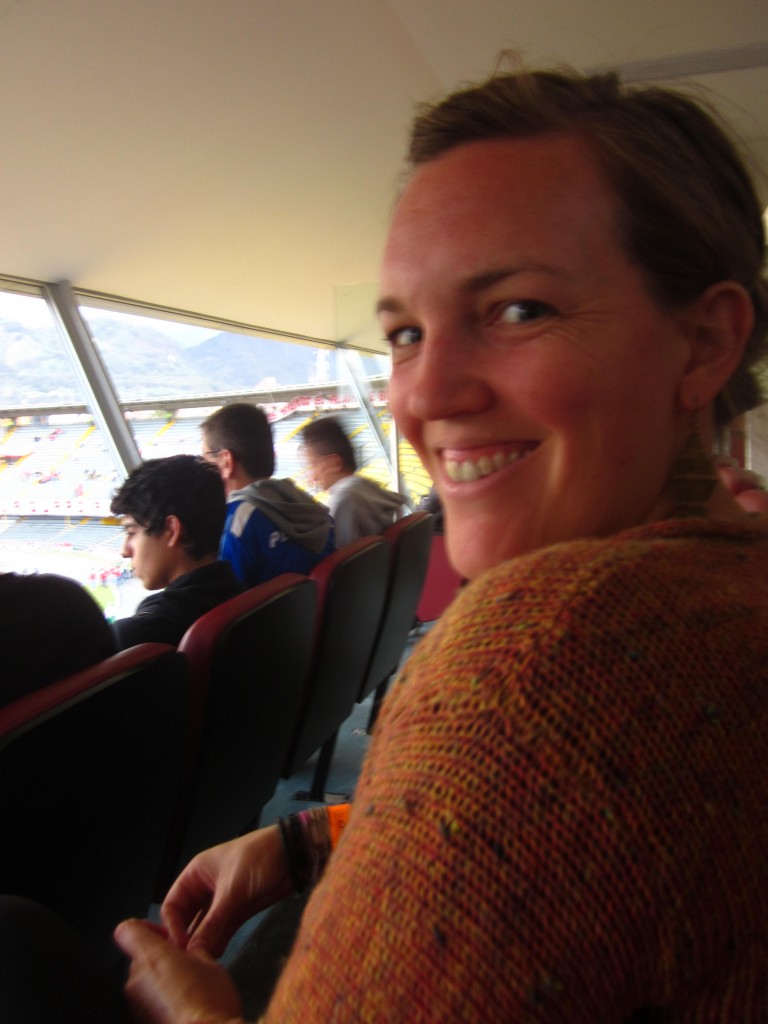 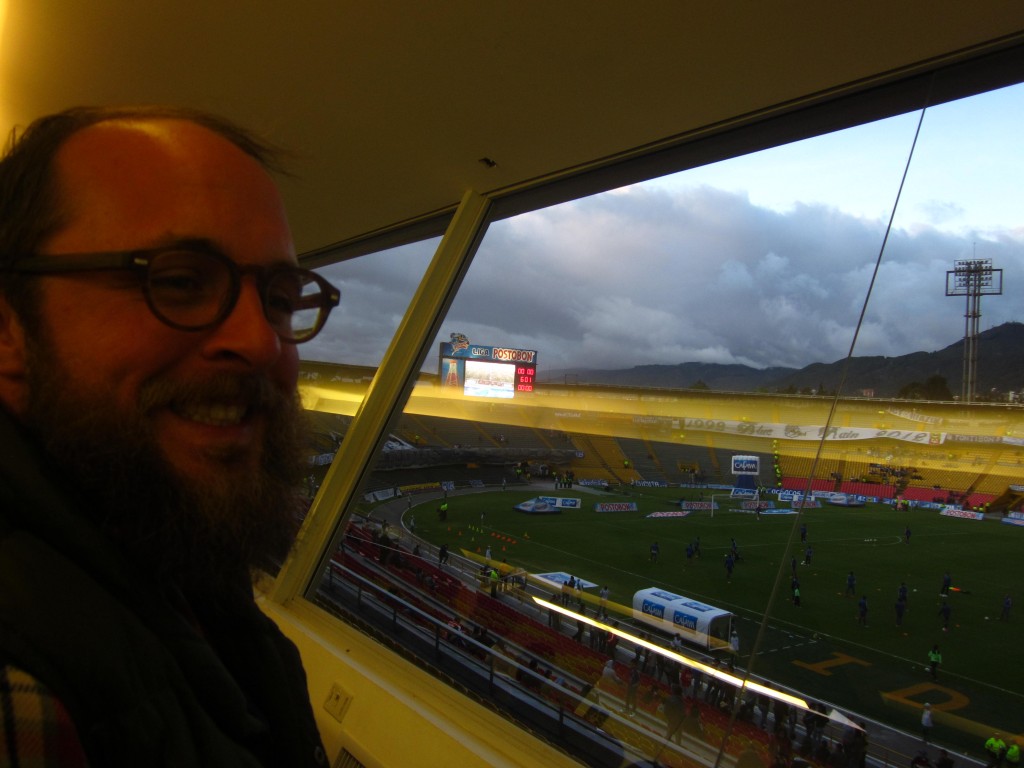 our seats in the VIP box. they are bad pictures, but I wanted to provide visuals.

but, we were way too early. the stadium was still deserted and we were stuck in the VIP section. so, we asked if we could leave and come back in an hour and were allowed out. so, the guy in the official jacket was waiting for us when we got out (duh). and walked down the street with us for a minute. that’s when we had to pay him. he knew all the security guards, so we were guessing that he normally got courtesy VIP tickets to sell on the street. we decided that $13 was fine and payed him. then went in search of a pre-game beer. the next street over was a side street to the stadium and there were tons of young santa fe (the other local team) fans hanging out waiting for the start of the game. we found a tiny pizza place and sat down for a beer before heading back. at one point we were the only people in the restaurant and the owner asked if we were going to the game. then he gave us a five minute long lecture about how all the kids hanging around wanted to rob us and that games were super dangerous, especially this game, which was between the two local rivals. he even started pointing out the teens on the street and saying, ‘him, see? he smokes marijuana.’

we weren’t sure what to make of it, but after drinking one beer we decided it was better to get back to our seats before the fans headed for the stadium. (oh, he also informed us that no alcohol is sold inside the stadium. what!? that was a blow to our american-ized understanding of sports. but we realized it must be for the better.) so, we left feeling a little bit like targets after the man had made us feel certain we would be robbed.

not surprisingly, nothing happended on our way back to the stadium. we got to our seats and some folks had started to trickle in. the game itself was great! totally dramatic and the fans on either far end of the stadium (where the cheap seats were) did not stop chanting and jumping up and down the entire game. there were 12+ yellow cards given and 4 red cards! by the end we started to fear for the center ref’s life. but, we decided that surely he got an escort out, given how many police were there. nobody won. the final score was 1-1, due to a penalty kick in the 90th minute of the game (the last one, for the non-soccer fans)! i told you it was dramatic. two of the red cards were given right before he blew the final whistle. and for the last 20 minutes of the game the announcer kept repeating that the santa fe fans were going to be allowed to leave first and then the millionario fans could leave 15 minutes later. we started to realize why it was a poorly attended match. apparently fights were a given with this rivalry, the two local teams. so, once again we geared up for chaos when we left the stadium. (oh, the VIP sections gets to leave whenever they damn well please, no matter what side they are on.) 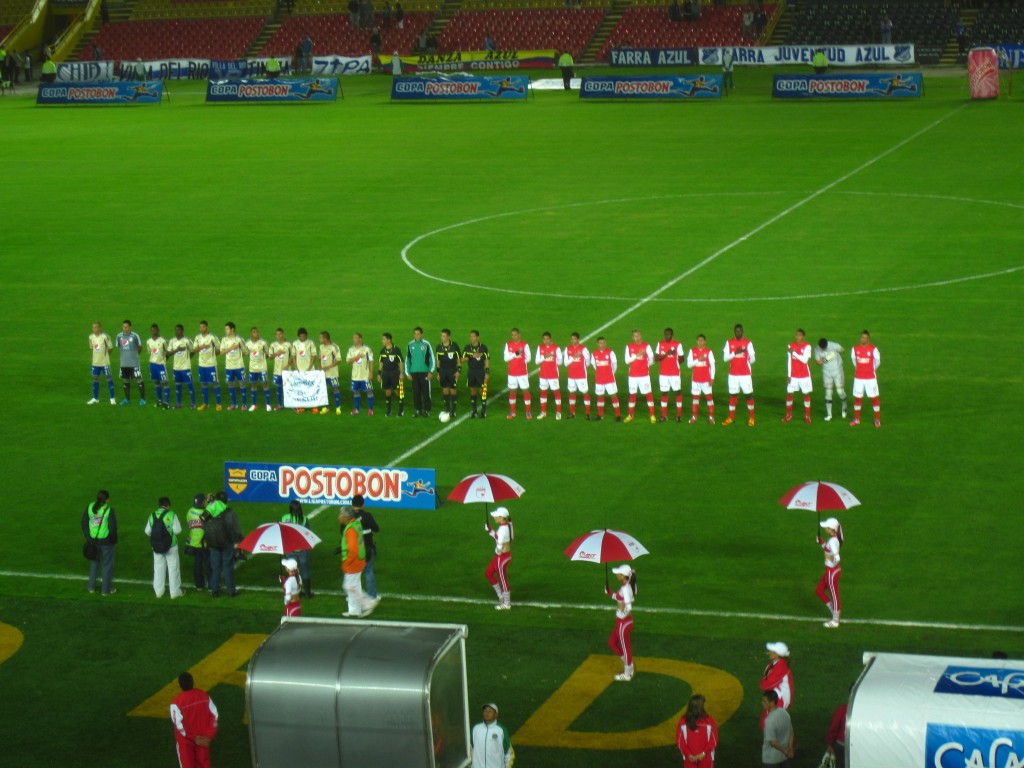 the teams: millonarios, blue and santa fe, red. only in bogota will the cheerleaders find a clever way to put umbrellas into their routine.

bad picture of the millonarios fans in the cheap seats. they were so loud we had no trouble hearing them through our glass box. 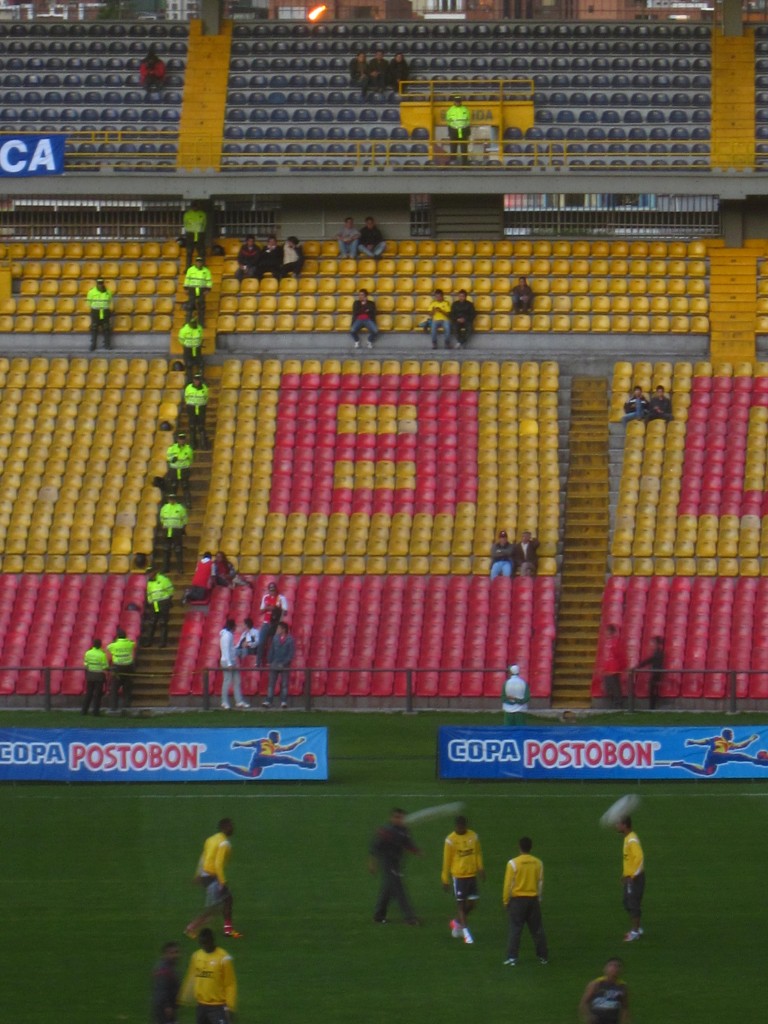 the police line had posted up well before the game began. and they were finally needed in the last minutes to keep each side from pummeling the other (while they were still inside the stadium).

so, we headed out toward the transmienio station, which was right outside but just over a pedestrian bridge. we started out for one side of the station, but on seeing 10 mounted policemen, we decided not to go in their direction. so, we headed the other way mixing in with a bunch of santa fe fans headed for the bus as well. and once we were on top of the pedestrian bridge we realized why the horses made us walk the other way. at the back side of the stadium a rush of santa fe fans all started running at something we couldn’t see (we’re guessing the millionarios fans) and motorcycle cops, cops on foot, and the horse mounted cops all made a bee-line for the chaos. it was wild. we, along with everyone else on the bridge, stopped to take in the scene for a minute, until the cops monitering that area shooed us on through the station. WOW! what a crazy night. it appears we happened upon the most riotous game we could have chosen to attend. and our adrenaline was pumping well after we got off at our stop. the thing we realized, though, was that you decide if you want to be a part of the chaos. otherwise you can just watch it unfold from your perch above the street with all the other non-violent, sober (remember) soccer fans.