after an amazing day at machu picchu, we headed back to cuzco late on wednesday night by way of another train/bus combo. bob’s dad and grandma were leaving the next day. so we decided we’d all hang out in cuzco and have an easy day of checking out museums and doing a little souvenir shopping for the nieces and nephews. we moved into a hostel where we could take over a 6-bed dorm room, since it was now down to the 5 of us.

jacob posing with his dinner at our new favorite restaurant in cuzco, los perros. it was so good that we ate there two nights in a row.

on thursday we decided to go white water rafting. we did quite a bit of research on which rivers were cleanest, safest, etc. and found out that because we were in the dry season the one we chose wouldn’t be too crazy. this was an important piece of information as none of us had ever been rafting before, and we didn’t want our first experience ever to end up being traumatic. the river was just a few hours southeast of cuzco, so it made for a very easy day trip.  we got shuttled to the camp where we’d leave all our stuff and changed into wetsuits. this was a bit of a task as it seemed they had mostly one size for women and one for men. but, we were all glad to have them as the river was glacier fed (meaning freezing cold!). so, we grabbed all of our gear and headed on up the road to where the boats would start out. we got a 10 minute safety course and lesson in commands, which really just scared me more than i had been before. after i felt the water i was pretty positive that i did not want to fall out of that boat. so, that became my focus.

we had tons of fun rafting down the river. and at one point michelle and bob even jumped in for a ‘swim’ when the guide told them we were at the best place for it. they quickly realized that they weren’t getting back into the boat unless we helped. so, jacob and i had to ‘save’ them the way we had learned in our crash course, which was stand near the edge and hoist them up using their life vests. the rapids were only up to class 3+. but, i think it was the perfect amount of adventure for beginners. none of us fell out, though there were boats that lost a person here and there and had to pick them up further downstream. we all had a great time and got a pretty nice upper body workout by the time we were done. we forgot to go to the rafting company to see if we wanted to buy any of the pictures they took. so, you’ll just have to imagine how bad-ass we looked while we were paddling our way down the river!

the next day was michelle and jacob’s last full day for seeing any more of peru. so, we decided to leave cuzco behind and head to a small town just north, called pisac. it’s a significant stopping place in peru because it holds another ruined incan city. this one impressively wraps around some high peaks overlooking the tiny hippy-filled town below. 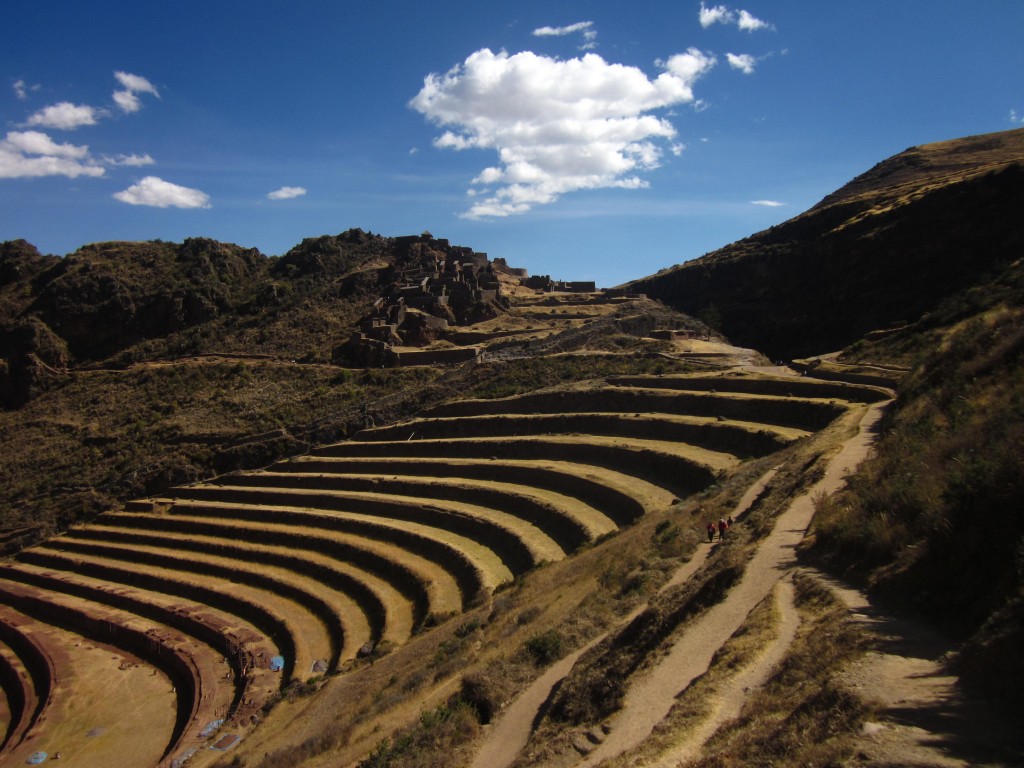 the terraces at pisac 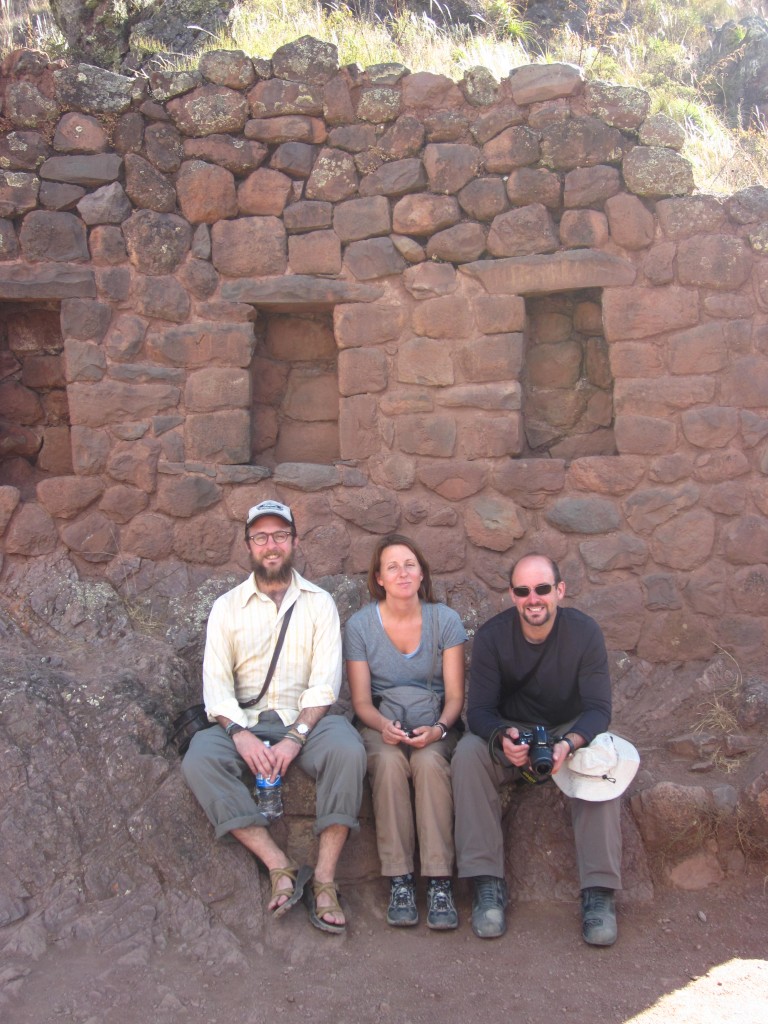 the siblings taking a quick break 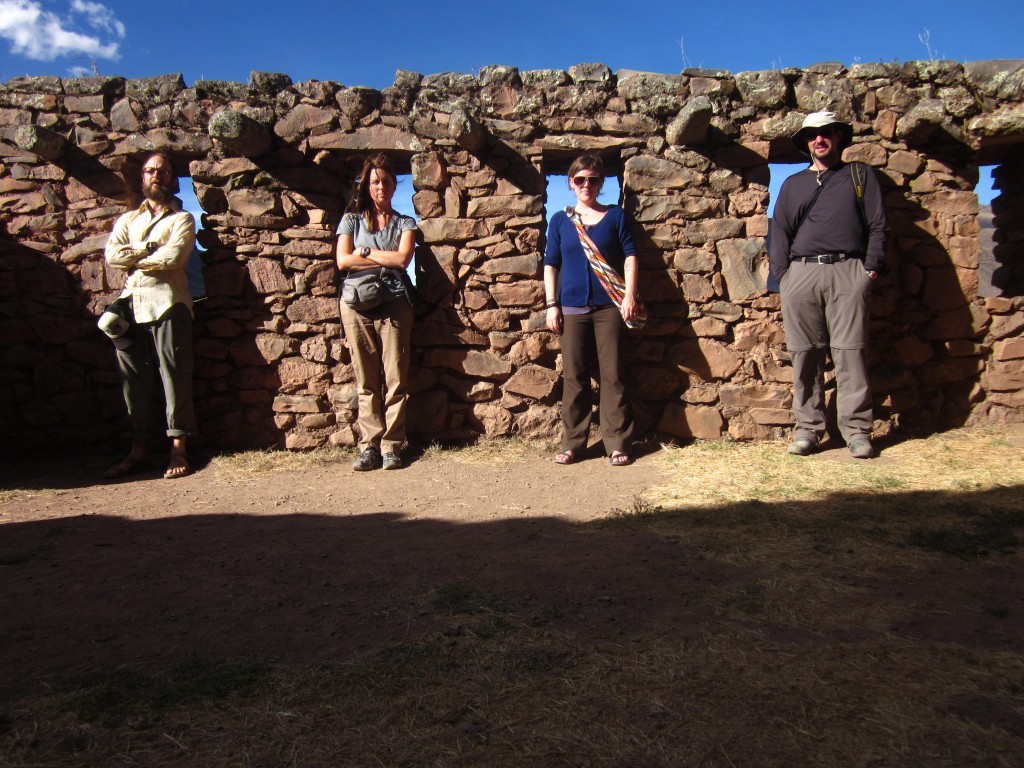 inside one of the ruined housing structures on the hill

michelle with more ruins and the valley of pisac behind her

the ruins were high enough above the city that no one seemed to try walking up (that we saw, at least). but, the hike down was through a beautiful valley that headed straight back into town. the landscape changed multiple times, and there were some steep points. in a few patches the rocks got really loose and slippery. so, of course, i took a spill about halfway down. my feet just flew out from under me and i landed on my butt. but, the scary part was that i landed right on the edge of the trail and there was a good 10 foot drop just off to my left. so, i was perched right on the edge and i’m sure i had a terrified look on my face. michelle was in front of me and tired to run back up to lend a hand and matt came running down from behind. but, it was so slippery that matt started to slide too and when he did michelle tried to back up to give him room. when she did she ended up stepping off the side of the trail and dropping a good two feet herself. somehow i managed to hold on to a bush that ended up gifting me with tons of it’s little dried buds. so, i did not tumble over the side. but, i was laughing so hard by the end of the whole thing that it’s a wonder i stayed where i was. i’m just sad that no one documented that moment of the hike!

it was really nice to get to experience a tiny colonial town with jacob and michelle before they left. so we were happy about our decision to go to pisac for the night. we finished the day out with cheap tacos, tall beers, and a game of yahtzee in the little courtyard of our hotel. the next day we headed back to cuzco with michelle and jacob so they could catch their flight to lima. matt headed on south toward bolivia on his bike to finish out the last leg of his adventures. and bob and i decided on a 20 hour over night bus ride back to lima to save ourselves some travel cash. we were pretty exhausted after an action packed two weeks. so, we mostly slept and sometimes tried watching the bootlegged movies they were playing only in spanish. 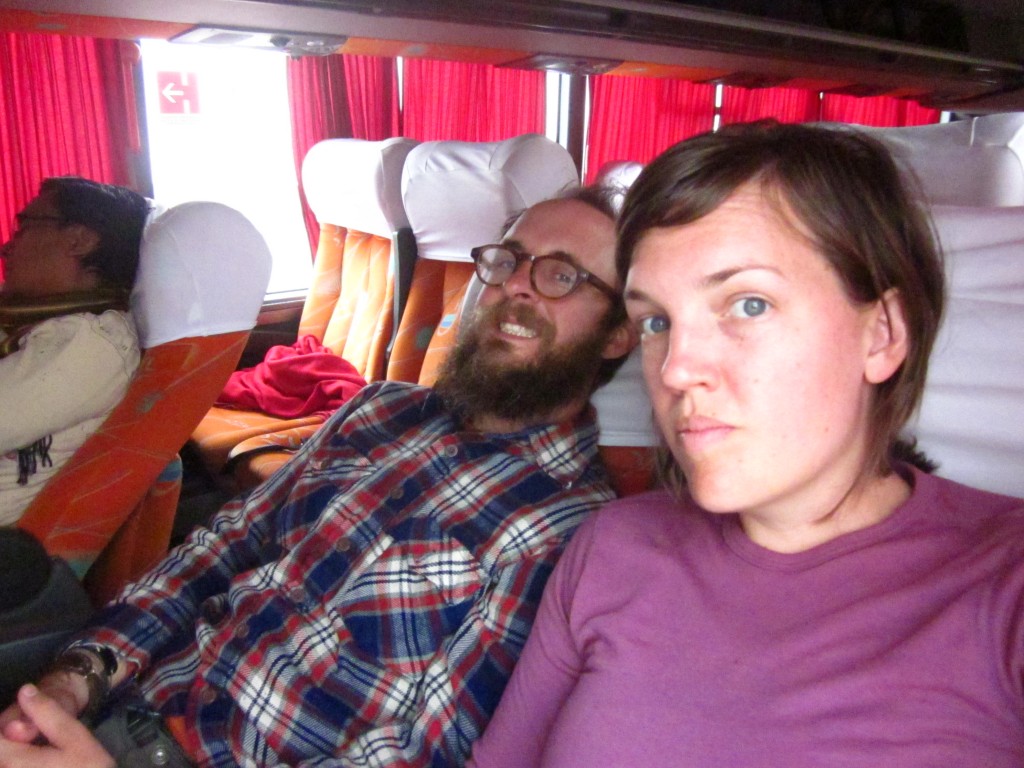 that smile is fake. but the trip wasn't so bad. we were just a little delirious when we arrived in lima and had a really hard time speaking spanish to our cab driver. 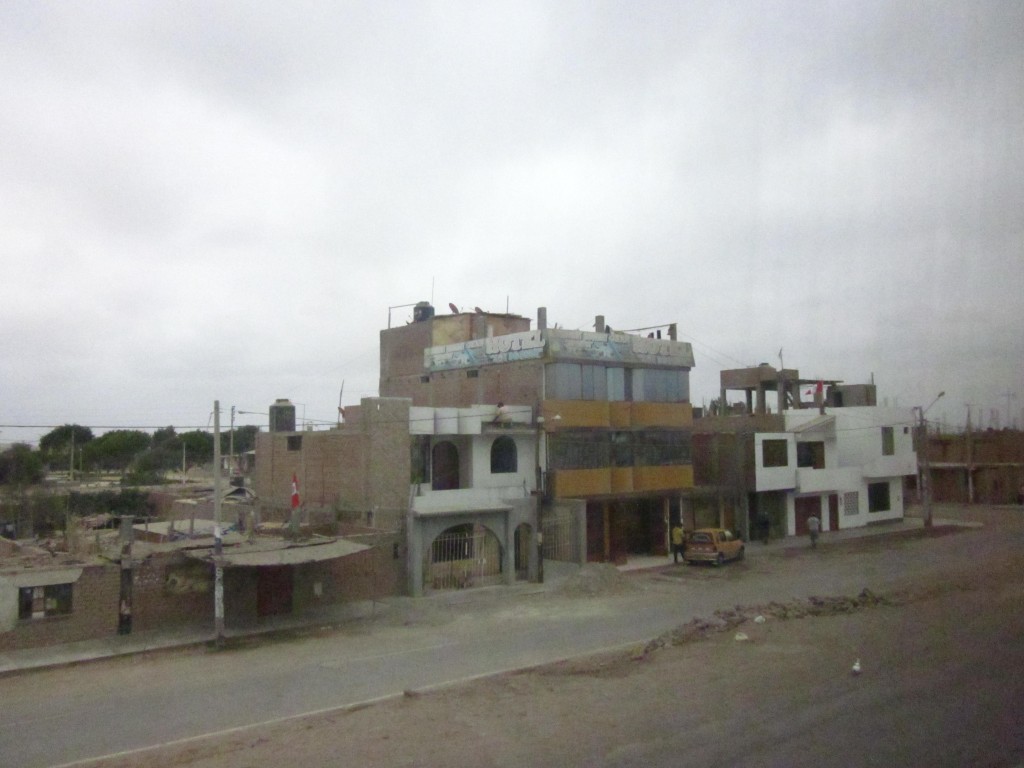 we’re now back in lima, resting up so that we can get back to biking adventures in colombia. we’ll head north from bogota to travel up to the coast for a few weeks before we start our first month of volunteer work in the mountains.

« we made it to machu picchu
back to the heat »