one of the most memorable days for us in the country was the day we went into gambita, the nearest town, for their summer fair. we caught the one bus that passed the house each week on sunday morning along with all the other country folks heading into town for the day. the route was pretty horrible for a large bus, but we went at a snail’s pace and reached the town after a little over an hour. to put this into perspective, it takes two hours to walk the same distance.  when we got into town it was still pretty early. not much was going on yet, and the food vendors were just starting to put out their tables and chairs. so we went up to the main square and checked out the church. one of the sunday morning services was about to start, so we went in and met the priest. but, decided not to stay for the service as the fair only happens once a year. 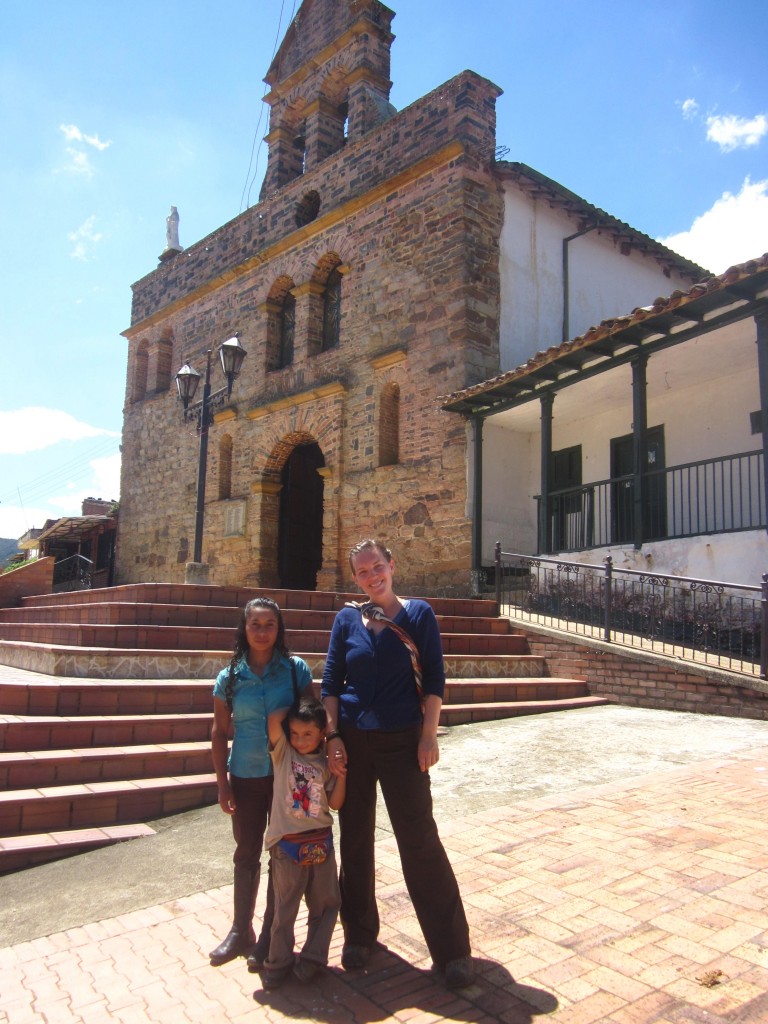 things started to pick up shortly after we started meandering back through town. but, we quickly realized that there wasn’t much to the gambita fair. it was mostly a bunch of food vendors with flame cooked meat and potatoes, a bunch of town folks and visitors drinking beer, and a livestock exposition in the arena on the edge of town was the main attraction. but the atmosphere was festive. so, bob and i were content to follow rosa around while she shopped for fruits and veggies to take home to cook for the week and people watch (while they all watched us b/c most of them had never seen a gringo in their town). 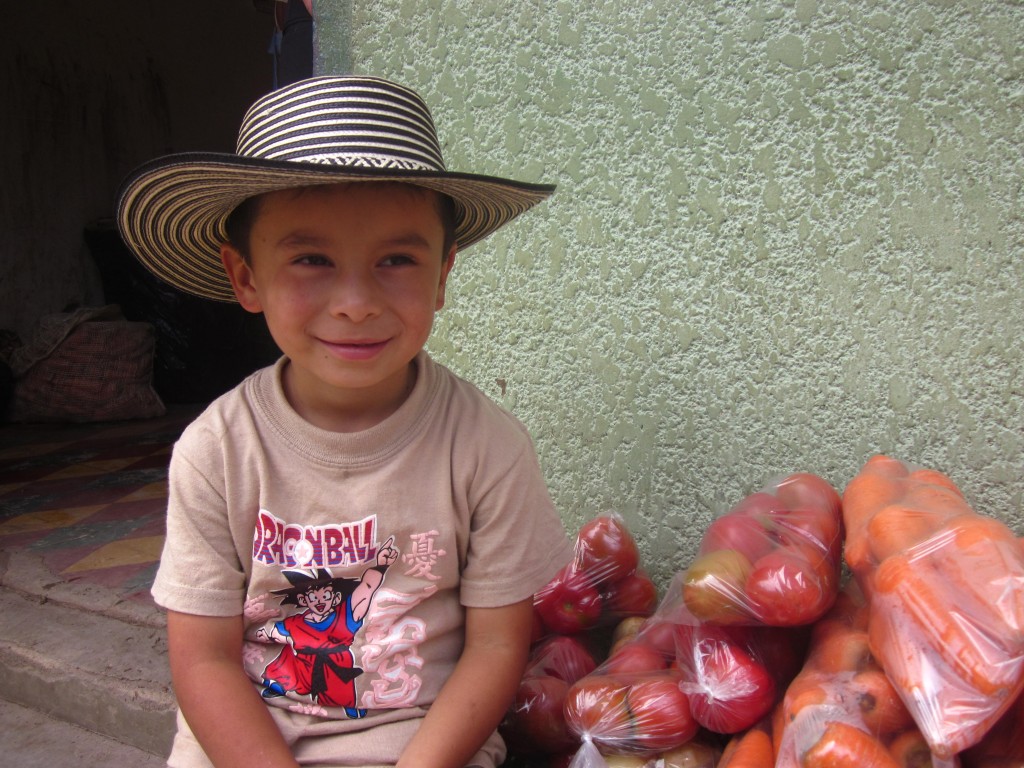 Santiago waiting patiently while his mom shops for food

rosa took santiago home on the 1:30pm bus, the only one going back the other way in the entire week. and she let us make the decision as to whether we wanted to head back on the bus or stay in town with her mom, chavela and catch the main event later in the afternoon… the bull fight. of course we wanted to stay, as we’d been waiting to catch one of these. but, the only dilemma was that our options for getting back home were to walk the two hours back or try and catch a ride out of town. we decided we had to take our chances. and, as soon as rosa and santiago were on the bus the real fun began.

chavela knows everyone in gambita after living there her entire life, and she has a lot of friends. so, before we knew it we were walked into one of the tiny bars and gifted an almost cold beer by one of her friends. then we all stood around laughing because we couldn’t understand a word of the spanish being spoken to us. but, everyone seemed to have a good time. after that we did some more people watching while chavela left us for a bit to socialize (it was her one day in town for who knew how long). 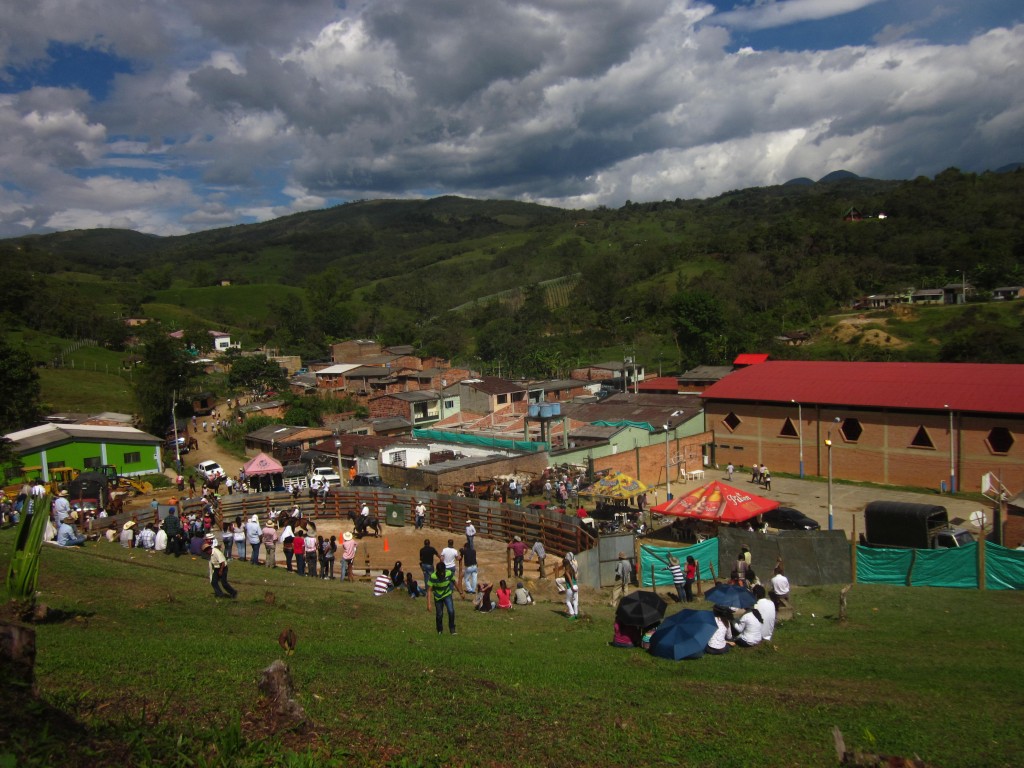 where the real action at the fair takes place

we all regrouped around 3pm, ready to head to the arena for the bullfight. we payed for our tickets and found a spot right in front of the arena, up on the grassy hill above. slowly, a small crowd trickled in and the festivities began. it has been a few years since killing a bull during one of these fights has been allowed in colombia. we knew this going in, or i might not have been so eager to see it take place. so, the fight itself was pretty standard. the matadores took turns with their bulls and managed to plant their banderillas in their backs. the crowd yelled ‘ole’ at all the right moments and we tried to follow along as best as we could. 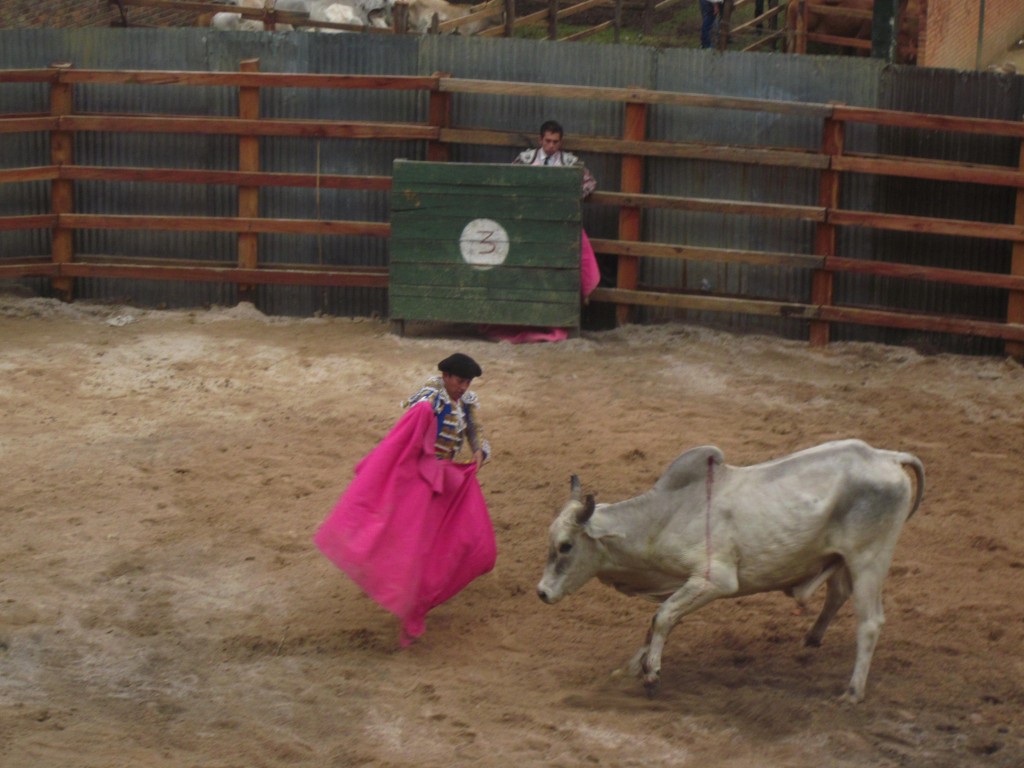 but, the most memorable moment of the entire day came when the town drunk (who apparently isn’t all there when sober, either) jumped the fence and ran into the ring. he grabbed one of the red capes and was immediately charged by the bull. he fell and got back up again, trying to taunt it back toward him. meanwhile the crowd was cheering and urging him on, and bob and i were horror-struck thinking he was about to die. he was charged again and this time the bull ripped his pants all the way down one side as he was taken to the ground. this time he did not get back up. the matadores and clowns had finally regained their senses enough to get the bull away from him and finally herd him back into the coral. but, the poor old guy had to be carried out by the medics, and it didn’t seem like he was going to recover quickly.

after that, we had lost our appetite for any more bull fighting excitement that day. so, we said goodbye to chavela, who was staying for the dancing later that night and would probably end up sleeping at a relative’s or friend’s house. we started our long walk back and contemplated how dark it was going to be before we reached the house. but, we lucked out and about 30 minutes into our walk and pickup truck passed and then stopped to let us jump into the back. it was already occupied by two older folks catching a ride. so, they made room for us. and we bumped our way along the rocky dirt road while the old man sitting with us jabbered on in drunken incomprehensible spanish.

when we reached the house, the truck stopped to let us out and everyone got out to see who the two gringos were that they had given a ride. the truck had a large cab, so two couples got out and chatted us up about what we were doing in gambita and how long we were staying. it was obvious that they weren’t locals, so we assumed they were just in town for the fair. but, as they prepared to leave, they invited us up to their farm the next day from lunch. after they were gone we went to the kitchen to drink some afternoon coffee and got the full scoop from rosa. the man who invited us to lunch was a colombian representative, who had grown up on a farm up the road. he and his siblings still owned the property and visited a few times a year, while they paid someone to live there and care for the animals year-round. so, we sipped our coffee and slowly camed down from the afternoon’s events, sharing our stories of the bullfight with rosa and pondering over our lunch invitation with the representative. it was a day that neither of us will soon forget.