after our month in the country it was a bit shocking to ride into bogota with all it’s people, buildings and lights. but, it took the sting out a little to get to stay with our friends andrea and matt and spend some quality time catching up with them. after we settled what steps we need to take to ship the bike to miami, though, we were antsy to get on the road again. we only have a few weeks left til it’s time to head back to the states and we decided that we should take a quick peek at ecuador while we’re down here and while we can.

our first stop outside of bogota was a desert observatory outside of neiva, where matt camped out on his way south. his pictures of the place looked pretty impressive, so we thought we’d check it out. the scene was pretty spectacular driving in, but we weren’t expecting to see too many stars as it was slightly overcast. but, we totally lucked out and just as the sun was setting and we were getting set up to camp, the clouds moved out and left an incredibly clear night sky for us. the caretaker out at the observatory was kind enough to call the local astronomy professor to come out and show us what was happening in the sky above us. 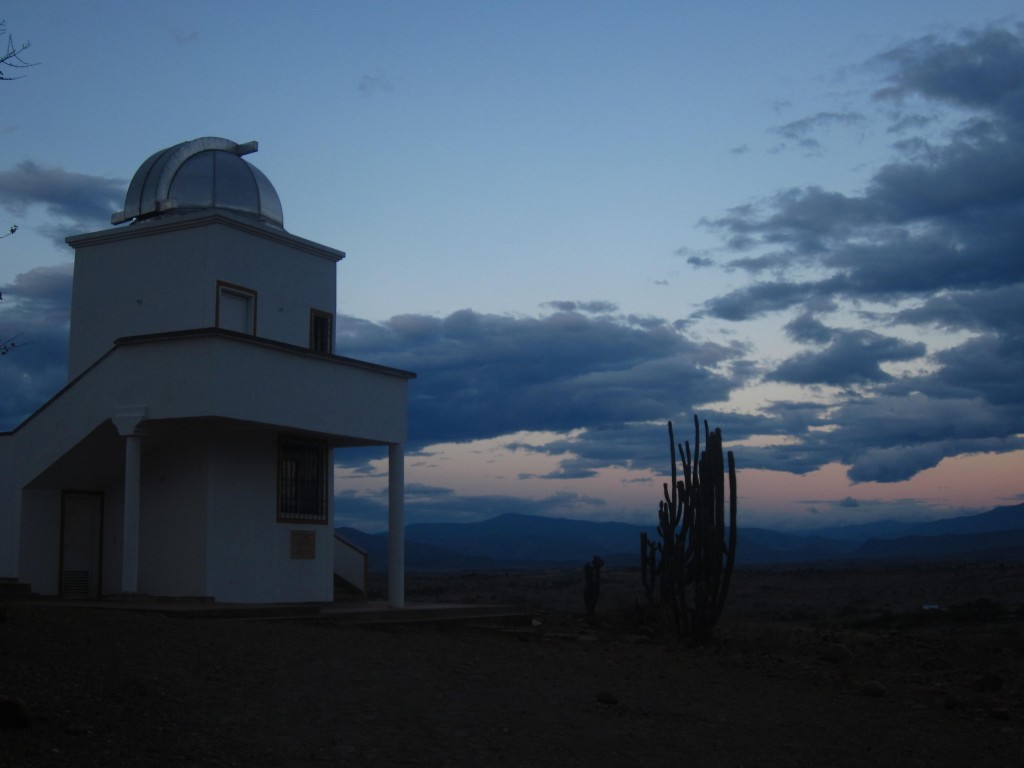 sunset at the observatory

we weren’t expecting too much, so we were completely blown away when we got up to the roof and saw the biggest telescope i’ve ever layed eyes on. then we got a two hour run down of everything visible in the southern sky. it was all in spanish and we were also really happy that we understood the majority of what the astronomer was saying. (those four weeks in the country really paid off!) i would say one of the coolest moments of the night for me was when we got to see saturn through the telescope. you could easily make out it’s rings through the lens! 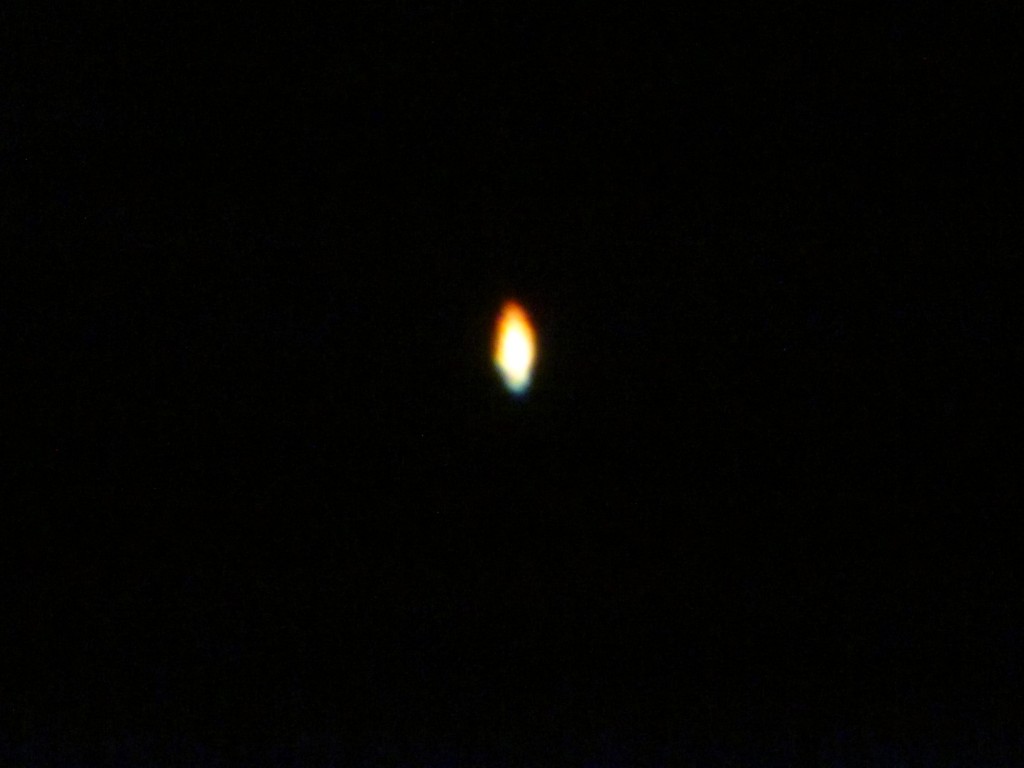 saturn! you could see the rings way better in the telescope, but we thought it'd be fun to take a picture of it too 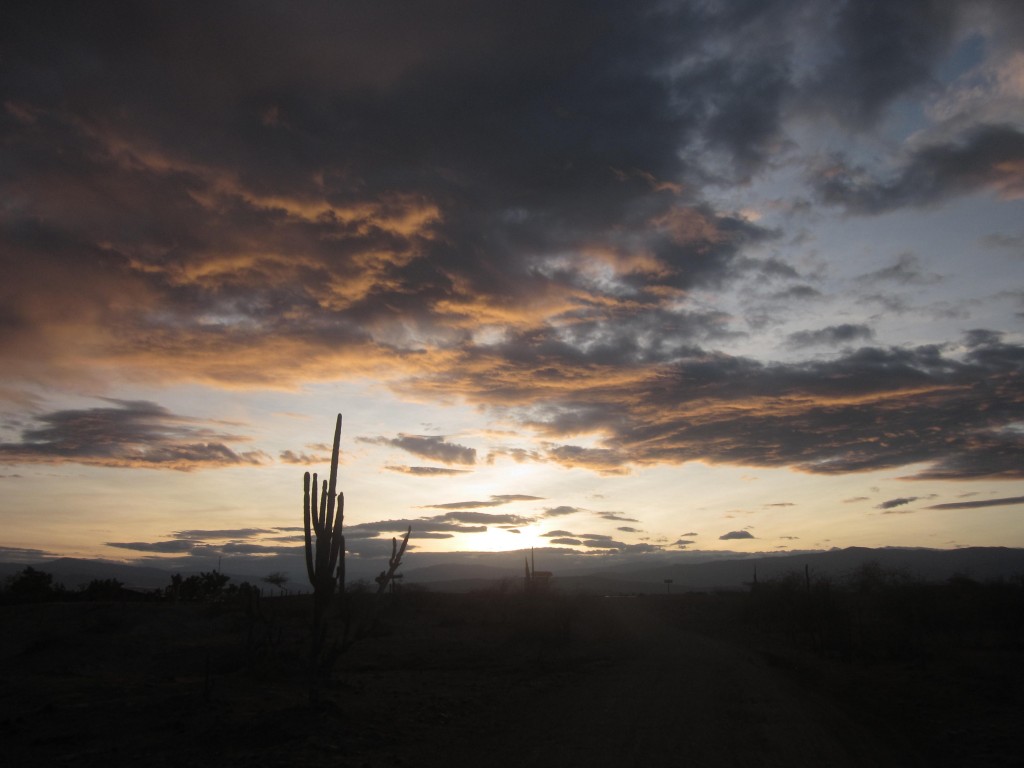 bob made it up for sunrise and captured it pretty beautifully

we headed on south that next morning, wanting to get as much time in ecuador as possible. we had chosen a path to get to the only recommended border crossing that would take us over a high mountain pass. we made pretty good time getting to the turn-off for the road cutting through the mountains, but had no idea what the conditions would be once the pavement ended. we ran across a military check point (which is extremely common here, but we usually don’t get stopped). at this one, they were stopping everyone. they immediately were interested in our whole get up. so, we quickly had 5 or 6 young soldiers asking us questions about our travels. their commander came over and got super interested in conversation as well. by the end of twenty minutes we had them laughing at every other thing we said. but, we also got some sound advice on the pass we were attempting to take. there was a land conflict between the indigenous folks living in that stretch of the mountains and the national park there. so, they didn’t advize that we cross the mountains there.

instead we were diverted on down the main road to the tourist town of san augustin (which we weren’t planning on stopping in). but, we decided that we should definitely not be taking any chances and headed south. this added a night to our path to ecuador. but, we were happy to have a night in a bed (instead of a tent) and rest up a little for the ride the next morning. this was the route that matt had taken to ecuador and he had warned us that the road over the mountains was not an extremely pleasant drive. when we started out in the morning things seemed pretty good. it was sunny, the road wasn’t in too bad of condition and there was lots of construction going on, so we were hopeful that the conditions had improved in the months since matt had driven through. but, half way up the mountain things turned crazier and crazier. 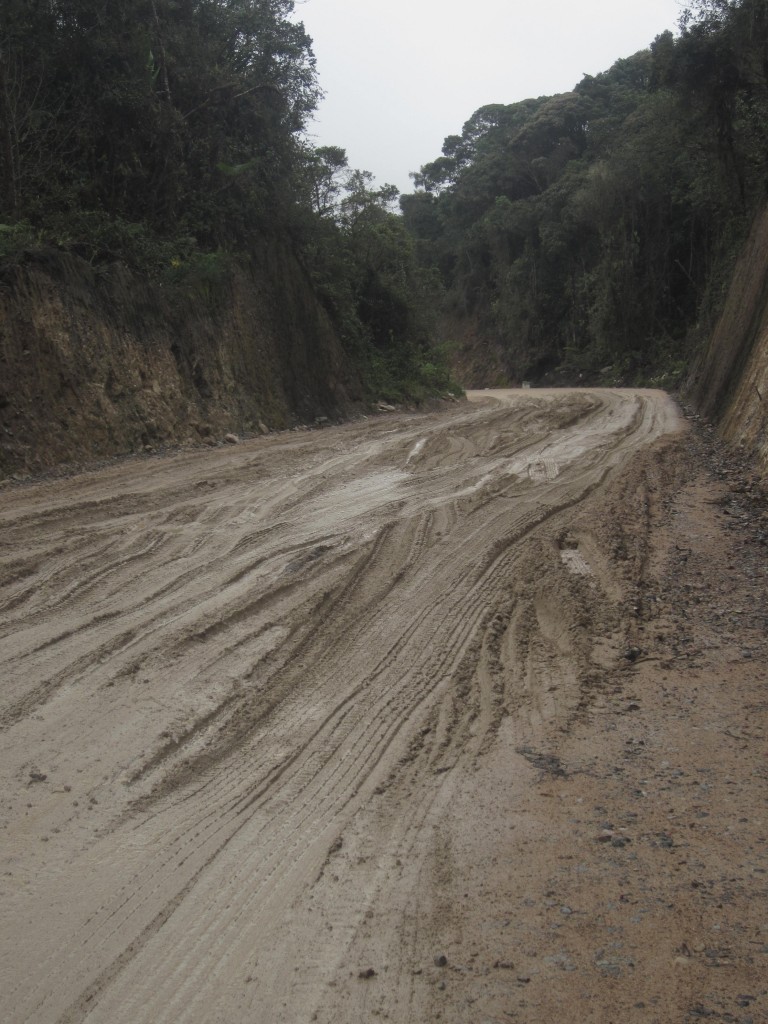 a little taste of what the road turned into the higher we climbed: nasty, sloppy mud

it was super cold, windy, rainy, and extremely muddy. but, we made it to the other side of the pass eventually with a treat waiting on the other side. we camped at some hot springs that night and got to utilize the tubs whenever we wanted. so we sat in them well after dark, trying to stay warm and putting our new star gazing skills to the test. once we found scorpio, everything else was easily visible. a fun fact we learned from our professor was that libra, which is just below scorpio, used to be part of the same constellation (it was scorpio’s pinchers). so that clears up a few things about why bob and i are together. our signs aren’t supposed to be ‘compatible’, but obviously if they were the same constellation once, there’s some history between them. 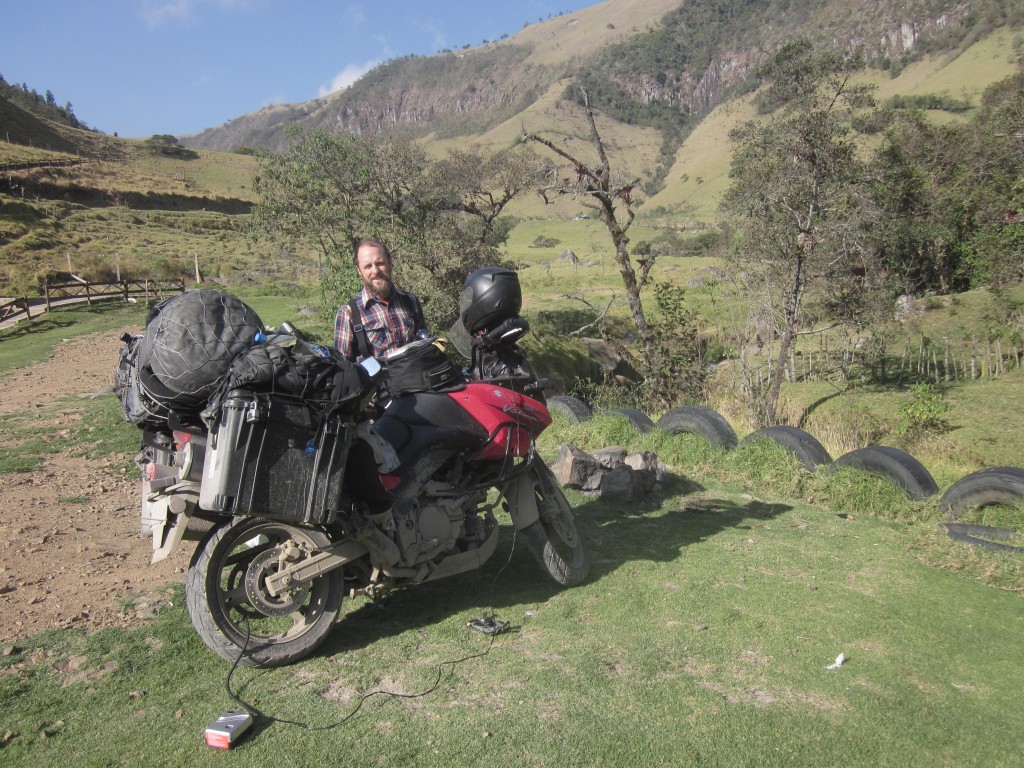 packing up to hit the road once again. can you see the mud caked bottom half of the bike? a little gift from our crazy ride through the pass the day before. time for a wash!

so, after another night of star gazing, we headed to the nearest city close to the border, pasto. it was more of a city than i had expected. but, we quickly found our way to the hostel and got settled for our last night in colombia. we were up early the next morning as the border was our first crossing on the bike in four months! so, we wanted to make sure everything went smoothly and we could get to our desired first stop in ecuador before dark.

we made one final stop in route to the border, though. there was a church built straight into a raven in a small town right on the border (you may remember matt’s pictures of it). well, we never made it all the way down into the valley because there seemed to be a massive pligrimage of sorts heading into the town. there was a large group of people walking and singing, blocking the road in and a long line of cars was backed up behind them either wanting to join or just trying to get through. so, we stopped at an overlook of the valley and decided it was time to make our way to the border. goodbye for now, colombia, we’ll be back sooner than later. 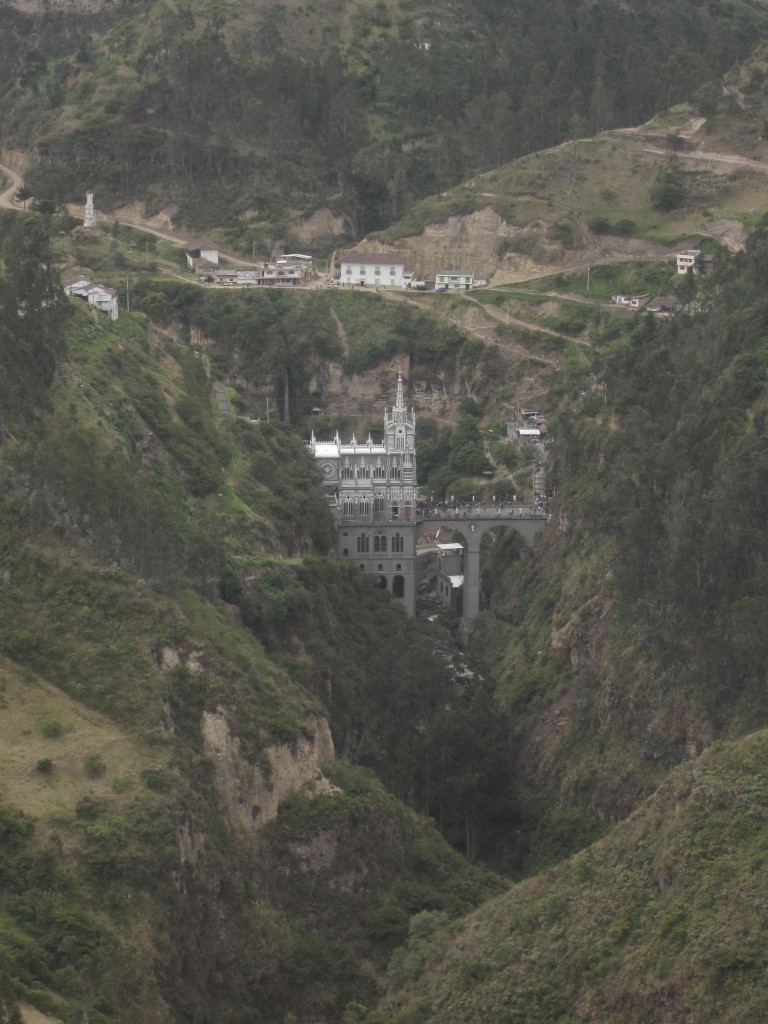 cool, even from far away

Response to finding scorpio and libra on the road south